I’m always weary of the hype. So last year, when everyone was talking about The Travelers, I ignored it. But as the hype has been going on, and I had a new opportunity to try it, I dared. And I’m glad I did. I had not read a spy novel for a while, and it was worth the time.

END_OF_DOCUMENT_TOKEN_TO_BE_REPLACED 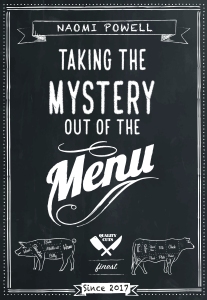 Taking the Mystery
out of the Menu

A pocket guide to cuisine and understanding the menu by an author who’s passionate about food and fine dining.

Eating out is not only a ‘special event’ activity enjoyed by families and friends in our modern high speed world, but very often a necessity for the great work force whose long working day and often unsociable working hours allow little time for home food preparation. However, when eating out for whatever reason, it can be very confusing when presented with a menu of unfamiliar terms and dishes. This pocket guide will help diners to master the mysteries of the menu with ease!

After retiring from her career as a music teacher, Naomi Powell returned to Somerset with her husband, Maurice. She is an active member of the Ricard III Society, the Nelson Society and the Royal OverSeas League, as well as an enthusiastic gardener. From her home garden, she began Somerset Garden at the Limes, a business growing, harvesting and making her own preserves, which she operated for five years with retail outlets across North and South Somerset. This is her first book.

After attending a lecture at the Historical Society in Muscat, Sultanate of Oman, I had a surprise invitation to go out for an evening meal.  My expectations were not high since the army officer to whom I had only recently been introduced, and who appeared anxious to show me the night life of Muscat, had already arrived late at the lecture venue, and my expectations collapsed even further when the said gentleman suggested that we go out for a pizza.  I was less than impressed, in fact quite indignant that he should consider such a humble snack as a noteworthy meal for a celebration.  The guy in question persisted with his plan and we enjoyed a rather superior pizza with salad – from the very first and just opened, pizza restaurant in the country.  We were married in Sri Lanka just 3 years later.  It could be said that it is difficult to put a value on a pizza!

Whilst on holiday several years ago, our cruise ship called into Portugal’s capital city, Lisbon, passing beneath the wonderful ‘25th April bridge,’ with little headroom to spare.  We had the day free; so decided to take the tram from the city square all around the old town.  It was a truly enjoyable, carefree experience of careering around sharp bends and squeezing past ancient buildings in our open carriage, greeting locals at their open windows with the closeness of almost being in their homes.  As the tram headed for its return journey, it was boarded by several young people, possibly students, dressed in local costume, who dispensed the most delicious traditional Portuguese custard tarts; the flavour was perfect and the custard cream was encased in a beautiful light pastry cup.  Madera wine was generously served with this mid-morning snack, and I recall thinking, ‘What an excellent dessert course this would make for any elegant dinner party.’  The warmth and tradition of Portugal was encased in this simple but elegant confectionery. A memorable trip endorsed by a simple treat.

Travelling around India on various occasions with my husband, we explored and enjoyed the wonders of the complex railway network of this vast, populous and amazing country.  The people are great, the countryside vivid and everything in between colourful scented and vibrant.  Travelling by rail introduces one to all the usual comforts and considerations offered by dedicated railway staff.  We boarded the Agra/Delhi train on the final leg of the Golden Triangle trip.  The familiar call from the lean and efficient platform vendors of “Chai, chai, coffee, chai” and the ‘chip-chipping together’ of the little clay cups suddenly approached our open carriage window.  There is never enough time to be too specific with one’s order, as trains run on time in India, and vendors need to catch as large a percentage of any potential trade as possible whilst the train rests.  The vendor often assumes one’s needs rather than waiting for travellers to place an order.  Because of time restrictions and many orders to fulfil, dozens of cups of liquid refreshment are served with enormous speed and exchange of small coins, amidst constant bustle and human passage.  As I settled into my seat and the final preparations for departure were nearing completion, the disposable clay cup of indeterminate liquid – I had ordered coffee – was thrust into my hand and money exchanged.  I sipped and contemplated and sipped again at the unfamiliar ‘coffee’ taste.  Time only allowed me to ask hurriedly, “What is this please?  Is it coffee or tea?”  “Soup Madam.”  Came the polite reply, and the voice vanished with the vendor as swiftly as the train pulled out of the station.

Break the clay cup and the spell is gone! 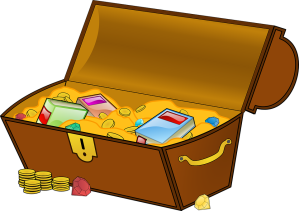 Frenglish? The links will be either in English or in French

Gleanings? Anything I found personally interesting and worthy of being shared with all my readers

DID YOU DISCOVER ANYTHING NEW HERE TODAY?
ANYTHING YOU RECENTLY DISCOVERED SOMEWHERE ELSE
AND THAT YOU WOULD LIKE TO SHARE?