The Adventures of Hergé

Published by Drawn and Quarterly in November 2011 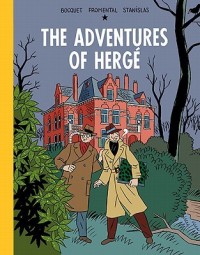 When I go to the library, I often roam a bit through the graphic novel section, just in case there might be something interesting there.
This book caught my eye right away: I thought, ah Tintin in English! And a crowd of childhood memories raced to my mind: I did enjoy a lot Tintin comics, good plots, nice drawings, funny characters, and I had not read any for ages, and probably none in English.

So I picked up the book and realized it was actually a biography of Tintin’s creator: Hergé! AND I needed to read a book related to Belgium for my 52 countries Reading Challenge, so that was perfect!

My first confusion and a look at the cover here above tells you how cool this is: the illustrator imitated at perfection Hergé’s style.

I knew nothing about Hergé, so it was neat to discover who was the man behind Tintin, his childhood, his success with comics. As a child, I had of course no idea that there had even been some dark controversies related to Tintin and Nazism, really!

If you enjoy Tintin, you have to check out this book.

The Adventures of Hergé is a biographical comic about the world-renowned comics artist Georges Prosper Remi, better known by his pen name, Hergé. Meticulously researched, with references to many of the Tintin albums and complete with a bibliography and mini-bios for each of the main “characters,” the biography is appropriately drawn in Hergé’s iconic clear line style as an homage to the Tintin adventures that have commanded the attention of readers across the world and of many generations.

Seven-year-old Hergé first discovered his love of drawing in 1914 when his mother gave him some crayons to stay out of trouble. He continued drawing in school when he fatefully met the editor of XXe Siècle magazine, where Tintin first appeared. His popularity skyrocketed from the 1930s through post–World War Two. Hergé was perceived by some to have aided the Nazi government in Belgium by continuing to publish Tintin in a government-sanctioned magazine, and he was briefly imprisoned in the aftermath of the war and narrowly escaped execution. Also covered are his marriage troubles in the 1950s and subsequent affair with Fanny Vlamynck, who went on to become his lifelong partner; his late career in the 1960s, as his interest in Tintin waned and he occasionally “disappeared” for weeks at a time as he contemplated giving up his career to become a fine-arts painter; and a recounting of a humorous encounter with Andy Warhol.  [Goodreads]

Little José-Louis was born in Neuilly-sur-Seine on 28 August 1962 and became passionate about good comic strips so quickly that at the age of 13, he founded Bizu, his own fanzine. He then established various illustrated anthologies for Bédérama, offering compilations of work by authors such as Franquin, Binet and Andréas.

To satisfy his passion for reading, he got a job with the Temps Futurs bookshop at the start of the 1980s and, together with friend and companion Jean-Luc Fromental, he took part in the production of the works of L’Année de la Bande Dessinée), published by that Parisian temple of cartoons and science-fiction.

His first articles started to appear in Metal Hurlant and he became a press attaché for Humanoïdes Associés in 1983, then became their collections editor. His first scripts were illustrated by Serge Clerc (“Les mémoires de l’espion”), Arno (Anton Six and “Kriegspiel”), Franz (“Mémoires d’un .38”, in collaboration with Fromental), Max (“Panzer Panik”) and Biard (“Le 38° Parallèle”, in collaboration with Rivière).

It was working with François Rivière on scripts and with Philippe Berthet for illustrations that he commenced his most ambitious series in 1983, “Le Privé d’Hollywood”. Fuelled by the old-style detective novels by Stuart Kaminsky and the initial works of the Série Noire, this reconstruction of an America which disappeared a long time ago has retained all of its charm, a fact confirmed by its reissue as a complete version in 1999.

From 1989 to 1991, he wrote scripts for Francis Vallés” trilogy of the adventures of the reporter Dorian Dombre (for Glénat) and endeavoured to bring back memories of Jerry Spring with Franz (“Fureur Apache”, for Alpen in 1990).

In 1991, he and Jean-Baptiste Gilou took part in the creation of La Sirène publications in which he published a monumental monograph on film director Henri-Georges Clouzot. A man with taste and many talents, he was also assistant editor in chief on Salut Les Copains and presenter on TF 1, but writing remained his biggest pleasure and it is therefore no surprise to find several of his novels in the catalogue of Série Noire and other popular editors.

In 1997, he worked with Marie-Ange Guillaume on editing a biography of René Goscinny for Actes-Sud and he provided the script to “Timbrés rares” for Antonio Cossu and Louis Joos. [goodreads]

The list of his work is impressive. See here.

“A useful introduction to one of the 20th century’s most important cartoonists.”-Hollywood Reporter

“Offers greater rewards for dedicated fans than those purely interested by the big-screen adaptation.”–THE AUSTRALIAN

“Barthélémy wisely evokes Remi’s style without attempting to copy it…the book evokes an unspoken fusion between its subject and his work…One can almost imagine slipping the pages of The Adventures of Hergé between the Tintin albums themselves, filling in blanks and bridging gaps. Somewhere between this episodic but evocative comic-book bio and Tintin’s own adventures lies the story of Georges Remi, hidden in the white expanses that separate one panel from the next.” –SLATE

“Delightfully drawn in a style that’s an uncanny homage to the late artist…The universal appeal and sheer volume of material, along with its consistent quality and rich cast of characters make it an appealing and rich expression of the medium and society. This graphic bio of the man behind the character is well worth the trip.”–THE MIAMI HERALD [on the publisher’s website]