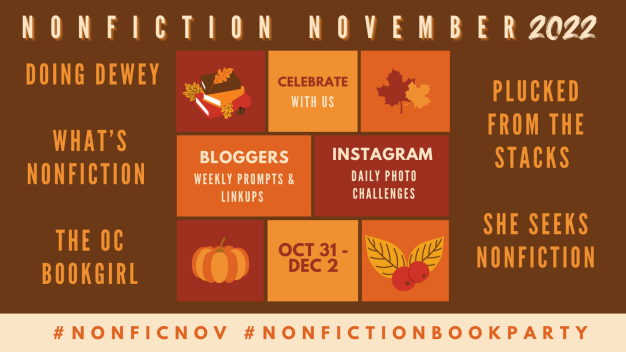 YOUR YEAR IN NONFICTION

Hosted by Katie @ Doing Dewey:
Take a look back at your year of nonfiction and reflect on the following questions:
What was your favorite nonfiction read of the year?
Do you have a particular topic you’ve been attracted to more this year?
What nonfiction book have you recommended the most?
What are you hoping to get out of participating in Nonfiction November?

Here is the recap of the nonfiction I have read (the links will send you to my review when it’s posted).
Having finished my Bible project, my number of nonfiction this year is far below the one from the past two years, but with 18 (actually 19, if I consider than I read one twice), I’m still happy. That’s 15% of all I have read so far in 2022.
And I am planning on finishing at least 3 more before the end of the year.

Here are the titles, in the various categories:

I’m very happy for the diversity of topics covered.

What were your favorite nonfiction reads of the year? 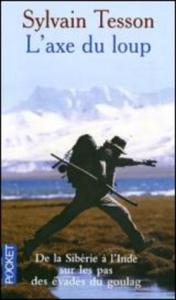 It turns out both are French.

What nonfiction books
have you recommended the most?

Digital Hell: The Inner Workings of a “Like” is supposed to be published in English on March 7, 2023 by Scribe US.
But I have written a detailed review and talked about it to many people. Everyone seems to be eager to discover this. It is such a major issue, with such an impact on the environment, that so few people are talking about.
And because I read this book, I have drastically reduced by online activity.
So I will not participate in the daily #nonfictionbookparty Instagram challenge this year.

As for Revenge of the Librarians, I have mentioned it to several students and members of my book club, and the reaction was, OMG, I’m buying a copy right now for a Christmas gift for such and such in my family.
So authors and publishers, from my library copy, you are going to get quite a few sales!

Do you have a particular topic
you’ve been attracted to more this year?
Not really, and I am glad for the diversity

What are you hoping to get out
of participating in Nonfiction November?
As usual, to get acquainted with more nonfiction readers
and find good titles unknown to me.

WHAT WAS YOUR FAVORITE NONFICTION THIS YEAR?

One special event I’ll be participating in this month (October 24-30): 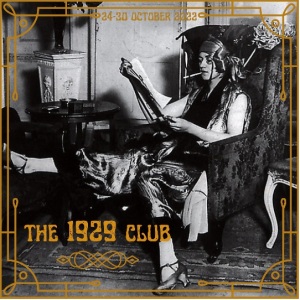 Click on the image to check what this is about 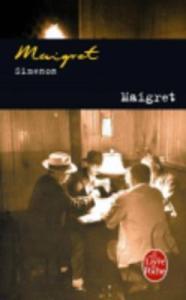 📚 Absolutely on Music: Conversations with Seiji Ozawa, by Haruki Murakami and Seiji Ozawa
Nonfiction
小澤征爾さんと、音楽について話をする in 2011
Translated by Jay Rubin in 2016

Murakami is my favorite contemporary Japanese author.
This book is doubly special, as I bought it in a bookstore in “Three Pines” in Quebec, several years ago. I am finally taking time to read it and am really enjoying all the insights on classical music.

“A deeply personal, intimate conversation about music and writing between the internationally acclaimed, best-selling author and his close friend, the former conductor of the Boston Symphony Orchestra.
Haruki Murakami’s passion for music runs deep. Before turning his hand to writing, he ran a jazz club in Tokyo, and from The Beatles’ Norwegian Wood to Franz Liszt’s Years of Pilgrimage, the aesthetic and emotional power of music permeates every one of his much-loved books. Now, in Absolutely on Music, Murakami fulfills a personal dream, sitting down with his friend, acclaimed conductor Seiji Ozawa, to talk, over a period of two years, about their shared interest. Transcribed from lengthy conversations about the nature of music and writing, here they discuss everything from Brahms to Beethoven, from Leonard Bernstein to Glenn Gould, from record collecting to pop-up orchestras, and much more. Ultimately this book gives readers an unprecedented glimpse into the minds of the two maestros. It is essential reading for book and music lovers everywhere.”

📚 Maigret (Inspecteur Maigret #19), by Georges Simenon
Mystery
Published in 1934
Reading it with one of my French students

At the end of #18, we read that Maigret is going to retire.
At the beginning of this one, he has just retired, but goes back to work to help his nephew, accused of a crime.
It was indeed supposed to be the last book of the series.
The series ended up having 75 books!

I’m just 10% in the story, but I like the personal details, like the Maigrets woken up around 4am by their nephew, then Maigret half asleep bumping his head as he goes down the stairs. Very down to earth.

“Maigret’s peaceful retirement in the countryside is disrupted when a relative, his nephew, unwittingly embroils himself in a crime he did not commit. The Inspector returns to Police Headquarters in Paris once again.” 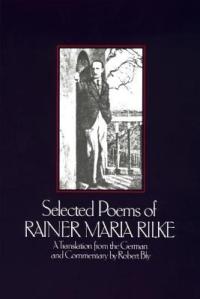 📚 Selected Poems, by Rainer Maria Rilke
Poems
Written between 1899-1926.
Collection published in 1948, translated by Robert Bly
It counts for The Classics Club.

This is the book I got for The Classics Club Spin #31.
It’s a bilingual edition, it will be fun going back to German.

📚  The Picadilly Murder (Ambrose Chitterwick #1), by Anthony Berkeley
Mystery
Published in 1929
It counts for The Classics Club
Will be reading for the 1929 Club

“Has Mr Ambrose Chitterwick witnessed suicide or murder at the Piccadilly Palace Hotel? Chief Inspector Moresby of Scotland Yard believes Major Sinclair, her nephew and heir, poisoned the old lady, and he has Chitterwick down as chief witness for the prosecution. Chitterwick finds himself drawn ever deeper into the case following a succession of unexpected twists and turns of the plot…”

📚  The Sound and the Fury, by William Faulkner
Literary fiction
Published in 1929
It counts for The Classics Club
Will be reading for the 1929 Club

I think I have only read As I Lay Dying by Faulkner, and I enjoyed it a lot. But I have heard this one is very challenging. We’ll see.

“The tragedy of the Compson family features some of the most memorable characters in literature: beautiful, rebellious Caddy; the manchild Benjy; haunted, neurotic Quentin; Jason, the brutal cynic; and Dilsey, their black servant. Their lives fragmented and harrowed by history and legacy, the character’s voices and actions mesh to create what is arguably Faulkner’s masterpiece and one of the greatest novels of the twentieth century. ” 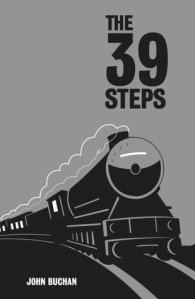 🎧  The Roman Hat Mystery (Ellery Queen Detective #1), by Ellery Queen
Mystery
Published in 1929
It counts for The Classics Club
Will be reading for the 1929 Club

This is my first book by this author, and so far I really like the characters and the details.

“A fine silk custom top-hat is missing from a crooked lawyer who was poisoned by lead alcohol in the Roman theater at the close of the second act, 9:55 pm. Inspector Richard Q, sneezing snuff; a thin, multi-faced, small “Old Man”; and the Inspector’s large writer son Ellery, puffing cigarettes, investigate. They start with maps of theater, the victim’s bedroom, and a list of names appended with flavorful commentary: the finder of the body is “cranially a brachycephalic”, and Dolly “a lady of reputation”. The flavor of 1929 costume and culture, with evening attire de rigueur, and hip flasks full of bootleg liquor.”

🎧  The 39 Steps (Richard Hannay #1), by John Buchan
Mystery
Published in 1915
It counts for The Classics Club

I am really looking forward to this one. I watched the movie such a long time ago that I have no memory of it, which is a good thing, it will be a total rediscovery.

“Adventurer Richard Hannay, just returned from South Africa, is thoroughly bored with London life—until he is accosted by a mysterious American, who warns him of an assassination plot that could completely destabalise the fragile political balance of Europe. Initially sceptical, Hannay nonetheless harbours the man—but one day returns home to find him murdered… An obvious suspect, Hannay flees to his native Scotland, pursued by both the police and a cunning, ruthless enemy. His life and the security of Britain are in grave peril, and everything rests on the solution to a baffling enigma: what are the ‘thirty nine steps?'”

HAVE YOU READ
OR ARE YOU PLANNING TO READ
ANY OF THESE?
WHAT ARE YOUR READING PLANS FOR OCTOBER?