An epic love story must overcome religious divide and a plot to eradicate two blood lines, as the Crusades and the search for the ancient mysteries of the Holy Grail gather momentum.

Raised by his father in La Rochelle, France, Paul Plantavalu is known for his artistic nature, inquisitive mind and Christian faith. He also has an unshakable love for his Muslim childhood friend, Alisha al Komaty. Courageous and outspoken, she returns Paul’s love. But their path is paved with obstacles; religion, war, political chaos and a mysterious enemy determined to destroy their family lines.

Sometime between 1110 AD and 1120 AD in the aftermath of the first crusade, a small band of nine knights — the founding knights Templar — recover ancient precious artefacts left by a former, advanced civilisation, beneath the City of Jerusalem. Ruthlessly guarded, the secrets revealed by this discovery are highly prized by powerful and dangerous forces far and wide; the repercussions of their capture are inextricably linked to Paul and Alisha. As Paul starts to experience dark and vivid dreams and the fragile balance of peace starts to crumble, it will fall to an enigmatic man known as Kratos and his female warrior protégée Abi Shadana, to safeguard Paul and Alisha.

Paul and Alisha’s love story weaves between the threads of our reality and other realms — from the Druids to the Sufi mystics, the Magi of the East, the secret political arm of the Knights Templar and the Isma’ilis, the Assassins. Knights and pilgrims alike will witness some of the darkest battles ever fought. The discovery of a unique sword’s lethal power and whispered connections to King Arthur and the Holy Grail lead Paul and Alisha to question if their lives ever be the same again.

The first of a four-part series, Outremer is an historical epic, which sweeps across England, Scotland and France, to Syria, Jerusalem and Egypt. Discover the truth — and crack the ancient code — behind the great mysteries of the High Middle Ages for yourself.

About the author: After strange and vivid experiences whilst living in Cyprus as a child, author D N Carter has been fascinated by the history, myths and legends of the Middle Ages and mankind’s past. As he got older travels to Pyramids of Giza in Egypt, the Languedoc region of France and the deserts of Arabia fuelled his enthusiasm. While not decoding maps and mathematical codes D N Carter enjoys adventure sports from parachuting to microlight flying. Today he divides his time between East Anglia in the UK and the south of France with his family.

What attracted me to the Middle Ages?

I have always had an affinity to this period, especially the secret and mysterious Knights Templar, their clothing and equipment plus a deep fascination with ruins, mainly castles. It began when I was nine years of age. I went to Fountains Abbey in Yorkshire on a school trip. I loved the architecture and the feeling of spiritual peace that I sensed there. That trip revealed I had a natural talent for drawing architectural scenes. I visited many castles and ruins and my fascination simply grew from there. As a youth I was lucky enough to travel to several major castles in Cyprus, Syria, Jordan and Egypt. The beauty, scale and history of them utterly captivated me…but gave me a sense of sadness too for all the carnage of war that was visited upon them and their occupants. Consequently I asked myself, why, why would people fight wars of such unbelievable brutality? That question was rammed home after learning how the Christian Crusaders captured Jerusalem in 1099 AD and massacred all its 70,000 inhabitants regardless of religion. I seriously questioned the real motives for the first Crusade with a deep sense there was far more than we are taught. Many more questions would follow and so my research began in earnest…and now in my mid fifties I am still researching and as one question is answered, still more arise.

I still love ruins…an almost naive romantic notion of great Knights on quests that stirs within me whenever I see a castle, or even just a small part of an ancient wall, but the reality of castles is one of war and likewise those warrior monks, the Knights Templar. They projected a mystique I wanted to know all about, especially if they were somehow true guardians of what is known as the Holy Grail. How could monks be warriors too…it was a contradiction? I learned that Knights Templar swore to protect an original spirituality belief system, which is the basis for all religions, dedicated to supporting established Churches of all denominations and religious Orders and of other traditions…including Islam. Initially it did not make sense, but I started to learn and more importantly understand, and wanted to share that information…hence ‘Outremer’ which conveys those truths set against the realities of the period and genuine people as well as the very real codes from antiquity carried across time hidden within religion.  It is knowledge and an understanding all people should have the opportunity to be shown.

Why did, and still do, religious people who claim to love peace and God commit such great atrocities against each other…even amongst themselves? When I learnt the name Jesus, as we use today, was not even generally known by that name in the Middle Ages, but as Iesus, I was more than a little surprised. Also England’s most famous King, Richard the Lion Heart, could not speak English…his first language was French, made me question everything I was being taught as fact…for what else are we taught today and led to believe is absolute and factual? Being of a spiritual nature, I read and studied as much as I could on every religious order and doctrine I could find. One aspect I always suspected was not somehow real was the so-called apocalypse. I could never understand how and why a God who supposedly created us, would destroy us. I learnt that Apocalypse means to ‘unveil’ or to ‘reveal’ meaning ‘un-covering’, translated literally from Greek meaning ‘disclosure of knowledge’, a lifting of the veil or revelation…not destroy, nor the end of the world etc. So what else within scripture was not explained properly I wondered? Also what was contained within the fourteen books removed from the Bible and why were they removed. To learn why meant delving back to the late 1100’s, a period that shaped the geopolitical maps of both Europe and the Middle East, which in turn shaped the relations between Christian and Muslim countries to this day, with repercussions that still echo to the present. That is why, in my opinion, it is so essential to fully grasp and understand the true realities of that era that led to Christian and Muslim ideologies being so diametrically opposed…but how some today, knowing how to manipulate those facts to suit their own particular agendas, can effectively control the future by controlling our understanding of the past; hence the sub title ‘Who controls the past, controls the future’.

To my English speaking readers: scroll down to read my review and read a synopsis of this novel.
It was published in an English translation in 2005, as Have Mercy on Us All (Simon & Schuster) 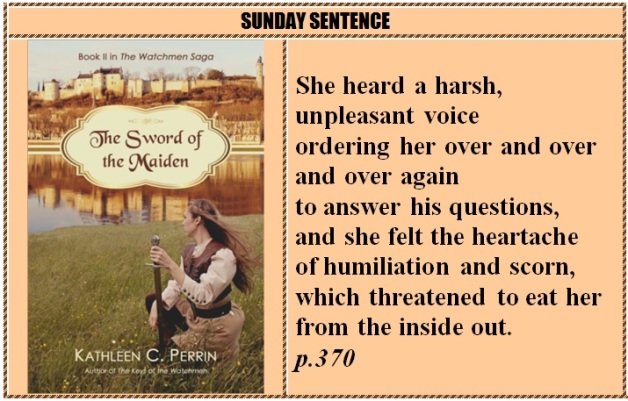 The Sword of the Maiden
by
Kathleen C. Perrin