January-February (not March this year) is the Japanese Literature challenge, in which I’ll be participating (more about that on January 11).
Besides that, I’m not really planning on any other challenge in 2023, trying to focus on my own personal challenges (reading more books in Spanish, Italian, and possible easy picture books in Japanese), on classics, and on my unruly TBRs, while keeping space for random reads.
Plus my French students keep me busy with reading French books as well!

This is the first collection of short stories in the Maigret series (written between 1936-1938).

We have a few stories left.
I really enjoya lot these short stories.
He is a master who can come up with interesting characters and great original plots in so few pages. In them, Maigret tends to be even more grumpy than usual, so there’s definitely some hidden humor here as well.

It is set during WWI, in June 1940 at Dunkirk.
It was actually trasnalted into English as Weekend in Dunkirk.

I had not read any book by Robert Merle for a very long time, so it’s nice to go back to his writing.
This book is raw, and yet a lot of humor at the same time. It tells the life of a group of French soldiers trapped in the pocket of Dunkirk, for two days, after the Franco-British defeat.

S. wanted to read a contemporary French mystery, and in my list, she chose this one.
This is my first book by Maillard. I like the humoristic style, and I’m at the point where the plot starts getting intriguing!

The book hasn’t been translated into English.
It’s narrated in the first person by Jim Carlos, a gardener working at Prés Poleux, owned by a rich family.
Jim has a very lazy dog (Lebowski), who spends its time sleeping, but one day it manages to dig, and finds a human bone (hence the title: Lebowski’s bone).
So, whose bone is it? What happened to that person?
Why is the bone on this property?

📚 Death of a Red Heroine
(Inspector Chen Cao #1),
by Qiu Xialong
Chinese Mystery
First published in 2000 (in English)
482 pages
Reading for my public library
Winter Reading Challenge
(book chosen for me by the satff)

I like the plot, and all the political background, with the Communist regime and the work ethics of the place.

“A young “national model worker,” renowned for her adherence to the principles of the Communist Party, turns up dead in a Shanghai canal. As Inspector Chen Cao of the Shanghai Special Cases Bureau struggles to trace the hidden threads of her past, he finds himself challenging the very political forces that have guided his life since birth. Chen must tiptoe around his superiors if he wants to get to the bottom of this crime, and risk his career—perhaps even his life—to see justice done.”

I’ll be joining the Japanese reading challenge, and hopefully will read 3 books for it this month: 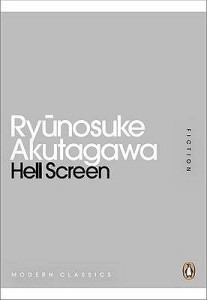 📚 Hell Screen,
by Ryunosuke Akutagawa
Japanese short story
Published in 1918
Not sure yet of the translator
58 pages
It counts for The Classics Club

I have read several short stories
by this author,
but not this one yet.
I can’t remember why I put it on my TBR,
but I want to keep the surprise right now,
so am not looking at the synopsis.
I’ll tell you more about it later. 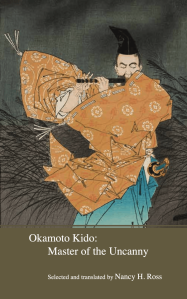 📚 Okamoto Kidō: Master of the Uncanny,
by Kidō Okamoto
Japanese short stories (before 1939)
Translated by Nancy H. Ross
168 pages
It counts for The Classics Club

“Born just after Japan transitioned from the Shogunate to Meiji, Kidō grew up in a samurai-oriented world being transformed by the West in many ways. As a reporter he covered domestic development and overseas wars, while also marrying a traditional geisha, eventually becoming a playwright and author. In addition to a number of well-received plays, he also penned more than fifty horror stories over a roughly ten-year period starting in the mid-1920s. Just prior to this period, the Great Kantō Earthquake of 1923 destroyed almost everything in Tokyo that remained from the Edo era, and Japanese horror itself was transitioning from the traditional uncanny stories to more modern horror structures.

While many of Kidō’s stories are retellings of tales from China and other nations, he also drew on a diverse range of traditions, including the heritage of Edo-era storytellers such as Ueda Akinari and Asai Ryōi, to produce a dazzling array of work covering the entire spectrum from time-honored ghost tropes to modern horror. The majority of his stories were collected in four volumes: Seiadō kidan (1926), Kindai iyō hen (1926), Iyō hen (1933), and Kaijū (1936).

Kidō remains popular for his elegant, low-key style, subtly introducing the “other” into the background, and raising the specter of the uncanny indirectly and often indistinctly. His fiction spans an enormous range of material, much of it dealing with the uncanny, and as a pioneer in the field his work formed the foundation for the new generation of Japanese authors emerging in post-Restoration literature.

This selection (12 stories) presents a dozen of his best stories: pieces which remain in print almost a century later, and continue to enchant readers—and writers—today. Finally, English-reading audiences can enjoy his strange visions as well.

📚 I am a Cat,
by Soseki Natsume
Japanese lit
Published in 1905
Not sure yet of the translator
470 pages
It counts for The Classics Club

I have reads several books by this author, but mnot yet this one, one of his most famous!

“Written from 1904 through 1906, Soseki Natsume’s comic masterpiece, I Am a Cat, satirizes the foolishness of upper-middle-class Japanese society during the Meiji era. With acerbic wit and sardonic perspective, it follows the whimsical adventures of a world-weary stray kitten who comments on the follies and foibles of the people around him.
A classic of Japanese literature, I Am a Cat is one of Soseki’s best-known novels. Considered by many as the most significant writer in modern Japanese history, Soseki’s I Am a Cat is a classic novel sure to be enjoyed for years to come.”

I have heard a lot about this author recently, so I was eager to discover Dr Thorndyke.
Richard Austin Freeman (1862-1943) was a British writer of detective stories, mostly featuring the medicolegal forensic investigator Dr Thorndyke. He invented the inverted detective story and used some of his early experiences as a colonial surgeon in his novels.

“In this first book of the series, Dr. Jervis encounters his old friend Dr. Thorndyke; soon after they are drawn into a mystery in which a man is accused of murder and his own bloody thumbprint – evidence that cannot be denied – places him absolutely at the scene of the crime. But for Thorndyke, things may not be quite as straightforward as they seem. Can one forge a thumb print? As Thorndyke investigates, it becomes apparent that he is too much of a threat, and must be removed…”

So far in the book, I don’t find as much medicolegal forensics as I expected, and the focus is more on Thorndyke’s friend Jervis. But still, I like it and am planning to listen at least to volume 2 to see if indeed there’s more medicolegal stuff.

I really enjoy this author. He is actually just as good in YA scifi as he is in thrillers.
I really loved a lot the first 2 books in this series, so am really eager to keep going.
It is set in post-apocalytic time in and around Paris and Versailles.

I will probably listen to other books, try to read a book in Italian, and go on with an Orthodox book I have been reading with the catechumens in our church.