Born and raised in France, I heard a lot about Jean d’Ormesson, and even read a few things by him, decades ago. I was surprised and thrilled that he was still publishing, and in my most favorite genre: historical fiction.

This is indeed a very delightful work of historical fiction, and very original in its form, as it is presented as a conversation.  But wait, what a conversation!
Imagine: France has just been through hell and fire, with the bloody Revolution of 1789 and the post Revolution years, just as bloody and hellish. Everything had collapsed with the royal heads, including the economy of a country already devastated by famine and very cold weather.

It took five years to a young General to help France get back on its feet. But General Bonaparte may have more ideas in mind, and he is sharing them here in the Tuileries where he took up residence in 1800, to his 2nd consul, Cambacérès, in the winter of 1803-1804, on the eve of declaring himself the Emperor of France!

The Conversation is not only original because of its format, but because of the way it was done: as the author explains in a very informative prologue, yes, it is an imaginary conversation, but every word of it was actually said or written by Bonaparte at one time or another, and taken from contemporary accounts. How cool is THAT! The words said by Cambacérès are more fictive.

Why choosing Napoleon as the center of this book?

The reasons are quite simple. Because he was a genius. Because he was the successor to Achilles, Caesar, and Alexander the Great. Because he changed the course of history and in the process helped shape the world in which we now live. He failed, but he failed in dazzling fashion, leaving a trail of powder across Europe. And most of all, because his was one of the most extraordinary historic and romantic adventures of all times.
pp.17-18

Through the conversation, you learn in a casual way of the events that led to that moment, you see how France finally managed to recover thanks to Napoleon, and you learn about its political situation at the beginning of the 19th century. But all this in a lively way, funny even sometimes. What a great way of learning French history!

You  manage of course a few glimpses into the fascinating and mysterious character of this man, a mad and proud genius maybe, though you have to admit that lots of things today still follow what he established himself through a frenzy of work. You may even start understanding his logic at wanting to be an emperor!

You are a great magician, conquering not merely by military genius but by the power of your words. I listen to you and grow dizzy. You are the author of your own life, set above all other heroes in history.
p.106

I have tasted command and cannot give it up.p.72

I know the French and their flightiness, the ease with which they can change their minds. The Republic is a chimera with which they are infatuated, but the infatuation will pass, just as others have. I am persuaded that in the country’s heart lies the willingness for a return to the ways of the monarchy.
p.75

I thought this short book was very brilliant, in its form and content. I like originality in style and form in literary fiction, I have talked to you several times I believe of Italo Calvino and the Oulipo movement, so it was fascinating for me to encounter through this book  a writer trying something different in form and style inside the genre of historical fiction.
Also, the English translation is very fluid and transparent.
If you like history, France, Napoleon, and enjoy something a bit different, you really have to try this short book.

After pulling the French people back from the abyss of chaos and misrule, Napoleon Bonaparte is on the brink of declaring himself emperor. “An empire is a Republic that has been enthroned,” he says. And so history is made.

As Napoleon stands at the precipice of his new empire, Jean d’Ormesson’s novel The Conversation: The Night Napoleon Changed the World captures a fictional conversation in which the thirty-year-old, struggling between revolutionary ideals and his overwhelming thirst for power, declares his secret intention to ascend the throne.

Second Consul Jean-Jacques Cambacérès, a brilliant law scholar and close ally, bears witness to the birth of this self-created legend: a man who left his mark upon time not through birth, but with ambition, and whose hubris is still invoked as a cautionary tale. Their imagined conversation brilliantly captures the tenuous moment when one man’s dream becomes reality. History, of course, records Napoleon’s dizzying triumphs and subsequent fall. [provided by the publisher]

ABOUT THE AUTHOR AND TRANSLATOR 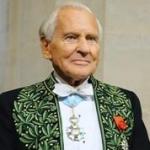 Jean d’Ormesson is the author of more than fifteen books, has a PhD in philosophy, graduated from the École Normale, and is a distinguished member of the Académie Française. He lives in Paris.

Timothy Bent has translated a number of books from French, including Brassaï’s Henry Miller: The Paris Years, Emmanuel Carrère’s I Am Alive and You Are Dead: A Journey into the Mind of Philip K. Dick, and Stéphane Audeguy’s novel, The Theory of Clouds. A former editor at Arcade Publishing, St. Martin’s Press, and Harcourt, he is currently Executive Editor, Trade, at Oxford University Press in New York, where he focuses upon history, biography, and current events.

* If you have problems entering the giveaway for this book, please send me an email before midnight on 12/13 at ehc16e {at] yahoo [dot) com. Include in it:

* when you enter a giveaway, I keep your email address only until a winner has been chosen and has confirmed. After that, I delete the form where your answers were stored during the duration of the giveaway. If you win and you email me your mailing address, I delete this email and its information as soon as I have mailed you the book.

HAVE YOU READ THIS BOOK?
WHAT’S YOUR FAVORITE NOVEL ON NAPOLEON ?

WOULD YOU LIKE OTHER CHANCES TO WIN THIS BOOK?
CLICK ON THE BANNER HERE BELOW
TO READ OTHER REVIEWS
AND ENTER MORE GIVEAWAYS!

In full compliance with FTC Guidelines,
I received this book for free from  the PUBLISHER in exchange for a fair and honest review.
I was in no way compensated for this post as a reviewer, and the thoughts are my own.