Seventeen-year-old Dara Roux and her two best friends, Mackenzie Yarborough and Jennifer Torres, the three collectively referred to as the F.I.G.’s (Females of Intellectual Genius) because each has an intelligence quotient in the genius range, have just returned from Frascati, Italy. It was there that their much loved teacher and mentor, Carolina Lovel, discovered that her birth parents were gypsies, and that she had a connection to the Voynich Manuscript, the most mysterious document in the world.

Now, with graduation from Wood Rose Orphanage and Academy for Young Women behind them, Dara asks her friends to help her locate her birth mother when she learns that she might be living in New York City. Relying on Dara’s gift for speaking and understanding foreign languages, the black and white images that stir musical cadences in Jennifer’s mind, and Mackenzie’s mathematical calculations that normally provide numerical solutions and answers to life’s most difficult questions, the determined young women tirelessly go from one address to another in search of Dara’s mother.

Their determination turns to desperation, however, as they encounter a dark hidden society more dangerous and terrifying than they could have imagined. It is there that
Dara hopes to find out why she was abandoned in a candy store all those years ago.

Originally from Carrollton, Illinois, author/agent/publisher Barbara Casey attended the University of North Carolina, N.C. State University, and N.C. Wesleyan College where she received a BA degree, summa cum laude, with a double major in English and history. In 1978 she left her position as Director of Public Relations and Vice President of Development at North Carolina Wesleyan College to write full time and develop her own manuscript evaluation and editorial service. In 1995 she established the Barbara Casey Agency and since that time has represented authors from the United States, Great Britain, Canada, and Japan. In 2014, she became a partner with Strategic Media Books where she is involved in acquisitions and day-to-day operations and oversees book production.

Ms. Casey’s two middle-grade/young adult novels, Leilani Zan and Grandma Jock and Christabelle (James C. Winston Publishing Co., Trade Division) were both nominated for awards of excellence by the SCBWI Golden Kite Award, the National Association of University Women Literary Award and the Sir Walter Raleigh Literary Award. Shyla’s Initiative (Crossquarter Publishing Group), a contemporary adult novel (occult romance/mystery), received a 2003 Independent Publisher Book Award and also an award of special literary recognition by the Palm Beach County Cultural Council. The Coach’s Wife (ArcheBooks Publishing), also a novel for adults (contemporary/mystery), was semi-finalist for the 2005 Dana Award for Outstanding Novel and listed on the Publisher’s Best Seller List. The House of Kane (ArcheBooks Publishing), released in 2007, was considered for a Pulitzer nomination. Another contemporary novel for adults, Just Like Family, was released at Christmas 2009 when it received “Special Recognition from the 7-Eleven Corporation.” The Cadence of Gypsies, a novel written for new adults, was released in 2011 and was reviewed by the Smithsonian Institute for its List of Most Notable Books. Her novel for adults, The Gospel According to Prissy, received a 2013 Independent Publishers Book Award for Best Book in Regional Fiction. In 2016, Ms. Casey’s biography/true crime Kathryn Kelly: The Moll behind Machine Gun Kelly was released as well as The Wish Rider, the sequel to her young adult book The Cadence of Gypsies.

Her award-winning articles, short stories, and poetry for adults have appeared in both national and international publications including the North Carolina Christian Advocate Magazine, The New East Magazine, the Raleigh (N.C.) News and Observer, the Rocky Mount (N.C.) Sunday Telegram, Dog Fancy, ByLine, The Christian Record, Skirt! Magazine, and True Story. A thirty-minute television special which Ms. Casey wrote and coordinated was broadcast on WRAL, Channel 5, in Raleigh, North Carolina. She also received special recognition for her editorial work on the English translations of Albanian children’s stories.

Ms. Casey’s award-winning science fiction short stories for adults are featured in The Cosmic Unicorn and CrossTime science fiction anthologies. Ms. Casey’s essays and other works appear in The Chrysalis Reader, the international literary journal of the Swedenborg Foundation, 221 One-Minute Monologues from Literature (Smith and Kraus Publishers), and A Cup of Comfort (Adams Media Corporation).

Ms. Casey is a former director of BookFest of the Palm Beaches, Florida, where she served as guest author and panelist. She has served as judge for the Pathfinder Literary Awards in Palm Beach and Martin Counties, Florida, and was the Florida Regional Advisor for the Society of Children’s Book Writers and Illustrators from 1991 through 2003. She is a frequent guest lecturer at universities and writers’ conferences around the country including the SCBWI Regional Conference, the Harriett Austin Writers Conference in Athens, SIBA (Southeastern Independent Book Sellers Association), Florida Writers Association, and the University of Auburn, Montgomery. She makes her home on the top of a mountain in northwest Georgia with her husband and three dogs.

Win one of three copies of
The Wish Rider (choice of print or ebook).
One winner will also receive
a $25 Amazon gift card (open internationally) 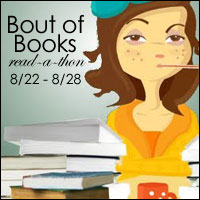 Well, I knew it would not be a good reading day, with a prayer service at Church, followed by a lecture – that’s why I ended up skipping my religious book. And tonight I have a two hour workshop at my library

I did mange to read over 70 pages, but this is actually a bad week. I can only read in the evenings, and I have a Church function tonight, a class at the library on Wednesday, and my block book club meeting on Friday! Will have to catch up on the other days!

Here is the rest of the schedule:

Thursday 8/25
The Book Junkie — Titles in the Tabloids

My challenge this week is to read 490 pages (average of 70 pages/day).
Not counting some time for audiobooks as well.

I did mange to read over 70 pages, but this is actually a bad week. I can only read in the evenings, and I have a Church function tonight, a class at the library on Wednesday, and my block book club meeting on Friday! Will have to catch up on the other days!

Here is the rest of the schedule:

Thursday 8/25
The Book Junkie — Titles in the Tabloids

My challenge this week is to read 490 pages (average of 70 pages/day).
Not counting some time for audiobooks as well.