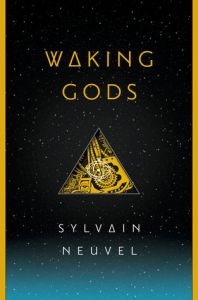 And here to my second scifi novel of the month! After the classic reviewed yesterday, here is a brand new one. I really enjoyed Sleeping Giants last year, the first book in the Themis series, so I eagerly seized the opportunity to read Waking Gods, the 2nd volume.
END_OF_DOCUMENT_TOKEN_TO_BE_REPLACED 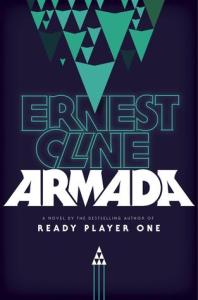 If you often come around this blog, you can see I rarely read and review science-fiction. The fact is, I’m super choosy and will only real the GREAT stuff – I got recently caught into reading some of a lesser quality. It won’t happen again, I promise you.
SO, when I heard Ernest Cline had a book coming out, I stalked my library catalog, and as soon as it was listed as on purchase, I requested it, blindly, without even reading the sypnosis. Because you know what? Once you have read Ready Player One (to this day it is still the best audiobook I have listened to, E.V.E.R.), you know this is the best of the best. So on release day, a copy of Armada was ready for me at my library. And my blind love as rewarded, see how…
END_OF_DOCUMENT_TOKEN_TO_BE_REPLACED

The Best Of All Possible Worlds

Published by Del Rey in February 2013 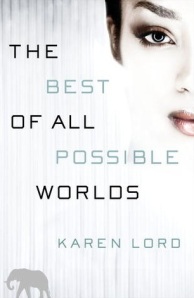 I had a really hard time with this book. I guess I was not smart enough to figure out who was who, what was happening, and even going back a few times to read the Goodreads synopsis did not help. In fact, I was wondering if I was reading the same book, same with a few hyper positive reviews published there. Was my egalley flawed and very different from the hardcover??

Maybe it was too much pure scifi to me? Actually, it was not even completely pure scifi as suddenly some fantasy elements appear, unexpectedly.

I even thought the writing was not that good, and rather disjunctive, and it was hard for me to make the connections between the different episodes.

I didn’t feel any real depth in the characters either; and I found the dialogues really superficial.

It was also a very slow read for me, I felt stuck in the mud not seeing where we going, if we were going anywhere. The only real good scene I thought was precisely when the characters got stuck themselves, in this subterranean city near the end of the novel.

The only reason I finished it was I had requested it! The synopsis sounds so much better than the book itself to me.

Seeing the author’s award, I guess you should read it if you really know how to appreciate scifi, or even dystopian?

A proud and reserved alien society finds its homeland destroyed in an unprovoked act of aggression, and the survivors have no choice but to reach out to the indigenous humanoids of their adopted world, to whom they are distantly related. They wish to preserve their cherished way of life but come to discover that in order to preserve their culture, they may have to change it forever.

Now a man and a woman from these two clashing societies must work together to save this vanishing race—and end up uncovering ancient mysteries with far-reaching ramifications. As their mission hangs in the balance, this unlikely team—one cool and cerebral, the other fiery and impulsive—just may find in each other their own destinies . . . and a force that transcends all. [Goodreads]

Karen Lord has been a physics teacher, a diplomat, a part-time soldier, and an academic at various times and in various countries. She is now a writer and research consultant in Barbados.

She won the Frank Collymore Literary Award for 2008 with the manuscript of the fantasy novel Redemption in Indigo and again for 2009 with the science fiction manuscript The Best of All Possible Worlds. She was nominated for the John W. Campbell Award for Best New Writer (2012).

Redemption in Indigo, which was published in July 2010 by Small Beer Press, won the 2011 William L. Crawford Award, the 2011 Mythopoeic Fantasy Award for Adult Literature, the 2010 Carl Brandon Parallax Award and the 2012 Kitschies Golden Tentacle (Best Debut). It was also longlisted for the 2011 OCM Bocas Prize for Caribbean Literature and nominated for the 2011 World Fantasy Award (Novel).

S. Krishna’s Books    – I should have listened to you!
Booklover Book Reviews