I read French Leave by Anna Gavalda in 2011. I liked it, but was not super impressed. But something (or someone??) told me to try another book, and I must have found Ensemble, c’est tout at a second-hand book sale – not easy to find these in French around Chicago!

One thing leading to another, one of my French students and I decide to read Ensemble, c’est tout together. The only challenging thing was that I had to slow down, as we were reading a set number of pages per week, and I would have liked to devour the whole thing in one week!

It’s about four main characters:
Camille, who loves drawing and excels at it. But she’s had a really tough family life so far, and right now she hardly survives by cleaning offices by night and living in a tiny room under the roof.
Philibert is from an aristocratic family. Right now he lives in this huge house, which he shares with Franck, an excellent cook, who’s also been damaged by life, and basically only likes his motorcycle and his grand-mother Paulette.
Paulette lives alone, but she’s old and we realize very quickly that she won’t be able to live by herself for long.

These four characters, all damaged one way or another, will eventually meet, and their meeting will ultimately help them respect each other in their differences, support each other, and rediscover that when all is said and done, life is worth living.

I realize that had I read the lines I just wrote, I would probably not have read the book, fearing it to be too romantic, emotional, or shallow.
But it’s not any of this, thanks to Gavalda’s fabulous writing style. 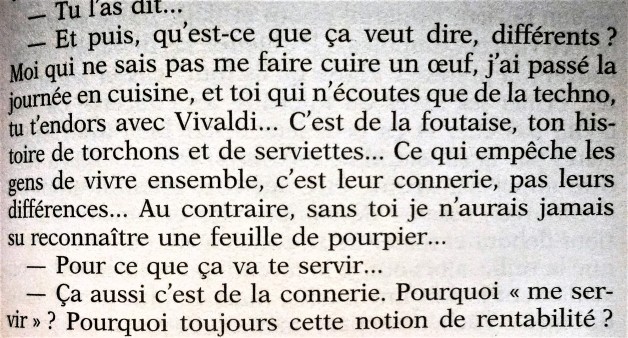 First of all, it flows so easily. Reading her, you would never think how hard writing a book could be!
The descriptions of characters (with their talents and flaws) and situations are so lively and spot on!
The narration is mostly through the eyes of a character, and you feel you live the experience with them, you hear them talk, and the dialogues and thoughts are such a smart mix of cultural references, jokes, and daily slang, with a lot of hilarious notes as well.

I’d like to add a note on the title.
The French title literarily means, Together, that’s all.
But we have two ways to understand “c’est tout”: as, that’s it, nothing else. Or, that is everything, that’s all that counts.
The book was translated in English as Hunting and Gathering, and I really have no idea why, and even how this fits!

HAVE YOU READ THIS BOOK?
Any other good novel along the same lines?
SHARE YOUR THOUGHTS  IN A COMMENT PLEASE