Here is what I posted this past week.

The advantage of reading many books at a time is when you manage to finish a bunch at the same time. So, here is what I finished this past week:

📚  The First Men in the Moon, by H. G. Wells
Science-fiction
Published in 1901
It counts for The Classics Club
and for the 2022 TBR Pile Reading Challenge

I got this classic at the book sale a few years ago!
I was very surprised when I started reading how funny it was, I was definitely not expecting that from this classic scifi. I learned then that it’s a satire on Jules Verne’s novel on the same topic – so now I’m rereading this one, that I read as a kid back in France, to see how Wells varies from Verne.
Keep in mind this was written in 1901, so it was extremely fascinating to see how we imagined the moon back then, what you could find there, on or in it.
There are awesome passages on the social description of the creatures there, and major criticism about human society, especially our love for war – a thing lunar people cannot fathom at all and find so absurd. And 13 years later, we were at it again…
And still in 2022…
This is really an excellent classic scifi. 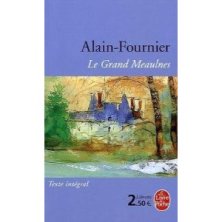 📚  Le Grand Meaulnes, by Alain-Fournier
Literary fiction
Published in 1913
It counts for The Classics Club

When I reread it ten years ago, I said you could not see WWI looming.
Actually, it struck me this time how you could feel it! Mostly with all these teens and young people refusing to grow up.
So I guess this time I saw the mysterious and enchanting domain in a very different light, still romantic, but with lots of shadows. 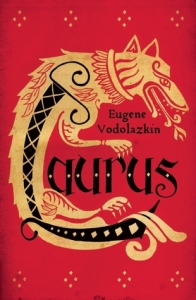 I checked out this book at my library a few years ago, but didn’t take time to read it. So I was thrilled a group of people at church decided to read it together and gave me the real incentive to read it with them.

It is a fascinating historical novel set in the late Middle Ages. The author is a Medieval scholar, and it was fun finding all the commonly Medieval themes, like bestiaries for instance.

But it’s more deeply than that the inner journey of a young man, Arseny, whose life will be more and more Christ like.
The book also contains a remarkable reflection on time (chronos and kairos).
Bravo to the translator for using words looking like Old English but still understandable by all today (even by me, whose first language is not English), to imitate the author’s use of old Russian for most dialogs.
Very smart book.
A member of my own book club recently presented another book by the same author, so I’ll be definitely reading more by Vodolazkin. 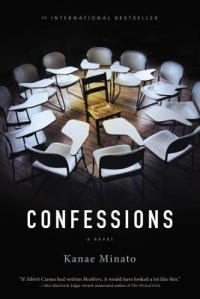 🎧 Confessions, by Kanae Minato
Thriller
Published in Japanese in 2008
Translated into English by Stephen Snyder in 2014
One of the Japanese books I didn’t have time to read this year during the Japanese Literature Challenge

I’m glad I found the audio version through my public library. The narrator Elaina Erika Davis is excellent, great tone with constant underlying threat, perfect for the story.
This is a very smart story about bullying and revenge, with many twists. Who is going to outsmart everyone else here? There’s a real battle of the minds, as I often find in Japanese thrillers. Brilliant!
Great psychological study!

By the way, I happened to meet someone this week who is studying Japanese. Even though deep down I believe I’m too old to get to the level I can read Japanese, I succumbed, so now I’m teaching myself Italian and Japanese on Duolingo.
I already know a few alphabets (Roman, Hebrew, Greek, Russian), so for now learning one more is easy. I’m probably just wasting my time, but I’m enjoying it a lot!! 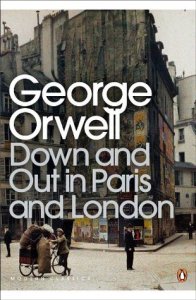 🎧 Down and Out in Paris and London, by George Orwell
Nonfiction/Memoir
Published in 1933
It counts for The Classics Club

Wow, this is quite a portrait of Paris in the early 30s!
The level of poverty is shocking. George Orwell lived it for several years, there and then in London.
He describes everything in great detail, and also with humor. The first page shows two French women screaming and yelling at each other, with chosen swear words, for instance.
At the very end, Orwell proposes some ideas of social reform that would allow tramps to disappear. Apparently the great of this world never took time to read this excellent short classic.

📚 Ensemble, c’est tout, by Anna Gavalda
Literary fiction
Published in 2004
Reading it in French with one of my students.
And it happens to be on my 20 Books of Summer list!

It was translated as Hunting and Gathering.
“Camille is doing her best to disappear. She barely eats, works at night as a cleaner and lives in a tiny attic room. Downstairs in a beautiful, ornate apartment, lives Philibert Marquet de la Durbellière, a shy, erudite, upper-class man with an unlikely flatmate in the shape of the foul-mouthed but talented chef, Franck. One freezing evening Philibert overcomes his excruciating reticence to rescue Camille, unconscious, from her garret and bring her into his home.
As she recovers Camille learns more about Philibert; about Franck and his guilt for his beloved but fragile grandmother Paulette, who is all he has left in the world; and about herself. And slowly, this curious quartet of misfits all discover the importance of food, friendship and love.”

📚 De la Terre à la Lune, by Jules Verne
Science-fiction
Published in 1865
Reading it in French with another of my students
It counts for The Classics Club

As I said above, I just finished The First Men on the Moon, which is supposed to be a satire of this book by Verne.
So I was thrilled my student wanted to read something by Verne. I read it as a kid, it is fun revisiting it and see how Wells changed it.

It was translated as From the Earth to the Moon.
“Verne’s 1865 tale of a trip to the moon is (as you’d expect from Verne) great fun, even if bits of it now seem, in retrospect, a little strange. Our rocket ship gets shot out of a cannon? To the moon? Goodness! But in other ways it’s full of eerie bits of business that turned out to be very near reality: he had the cost, when you adjust for inflation, almost exactly right. There are other similarities, too. Verne’s cannon was named the Columbiad; the Apollo 11 command module was named Columbia. Apollo 11 had a three-person crew, just as Verne’s did; and both blasted off from the American state of Florida. Even the return to earth happened in more-or-less the same place. Coincidence — or fact!? We say you’ll have to read this story yourself to judge.” 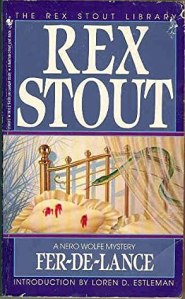 🎧 Fer-de-Lance (Nero Wolfe #1), by Rex Stout
Mystery
Published in 1934
It counts for The Classics Club

As you can see, I’m working very actively on my Classics third list…
This is my first book by Stout, and so far, I’m really enjoying a lot the Nero-Archie tandem.
If Sherlock Holmes was a bit eccentric, his American equivalent is so much more!

“As any herpetologist will tell you, the fer-de-lance is among the most dreaded snakes known to man. When someone makes a present of one to Nero Wolfe, Archie Goodwin knows he’s getting dreadfully close to solving the devilishly clever murders of an immigrant and a college president.
As for Wolfe, he’s playing snake charmer in a case with more twists than an anaconda — whistling a seductive tune he hopes will catch a killer who’s still got poison in his heart.“

I read Plainsong, the first book in this series in 2013, and really enjoyed the writing. So it’s high time to tackle this one that’s been collecting dust on my shelf.
This is part of my effort for the TBR Challenge.
Yes, still planning to begin this one soon!! Others keep creeping and take its place.

“Kent Haruf, award-winning, bestselling author of Plainsong returns to the high-plains town of Holt, Colorado, with a novel of masterful authority. The aging McPheron brothers are learning to live without Victoria Roubideaux, the single mother they took in and who has now left their ranch to start college. A lonely young boy stoically cares for his grandfather while a disabled couple tries to protect their violent relative. As these lives unfold and intersect, Eventide unveils the immemorial truths about human beings: their fragility and resilience, their selfishness and goodness, and their ability to find family in one another.” 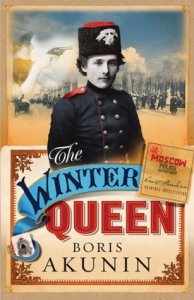 The Winter Quuen (Erast Fandorin Mysteries #1), by Boris Akunin
Historical fiction
Published in 1998
Translated from the Russian by Andrew Bromfield in 2004

My library recommended it to me a few years ago, and this past week, another student of mine did too, so I guess it’s about time.

“Moscow, May 1876: What would cause a talented young student from a wealthy family to shoot himself in front of a promenading public in the Alexander Gardens? Decadence and boredom, most likely, is what the commander of the Criminal Investigation Division of the Moscow Police thinks, but still he finds it curious enough to send the newest member of the division, Erast Fandorin, a young man of irresistible charm, to the Alexander Gardens precinct for more information.
Fandorin is not satisfied with the conclusion that this is an open-and-shut case, nor with the preliminary detective work the precinct has done—and for good reason: The bizarre and tragic suicide is soon connected to a clear case of murder, witnessed firsthand by Fandorin. There are many unresolved questions. Why, for instance, have both victims left their fortunes to an orphanage run by the English Lady Astair? And who is the beautiful “A.B.,” whose signed photograph is found in the apparent suicide’s apartment? Relying on his keen intuition, the eager sleuth plunges into an investigation that leads him across Europe, landing him at the deadly center of a terrorist conspiracy of worldwide proportions.“

📚  NO BOOK RECEIVED THIS PAST WEEK 📚

HAVE YOU READ ANY OF THESE BOOKS?
HOW WAS YOUR WEEK?
BE SURE TO LEAVE THE LINK TO YOUR POST