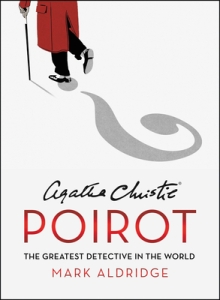 After listening to all of Hercule Poirot short stories and novels, I decided to conclude my experience with Agatha Christie Poirot:
The Greatest Detective in the World.

It’s a very interesting volume.
The writing is sometimes a bit dry (hence 4 and not 5 Eiffel towers), but the content is fascinating.
The author recaps all about Hercule Poirot, in each decade.

Each story is summarized (without spoilers).
With added content such as excerpts from Christie’s journals and correspondence, and reviews from famous newspapers witnessing to the reception of each story (in print, as a play, on radio, TV, or as a movie).
There’s also a lot of input about the interaction between Agatha Christie and her publishers – and it’s never rosy!

I didn’t know that she had so many money and tax problems.
I also discovered that several books first appeared in a serialized format for newspapers, or were adapted to fit that format. Which forced her sometimes to make changes to her original book. Or rather, publishers would force her to do that, to be sure it would work for newspaper readers. So in that respect, it was a bit disconcerting to realize that the final book was maybe not exactly what she originally did.

There are a lot of illustrations, book covers, movie posters, but alas all in black and white. But I realize the book would have been too expensive with color illustrations.
The book ends with a bibliography, lots of notes, and a thorough index.

Chapter 8, entitled 2000 and Beyond, was particularly interesting.
It certainly shows how the Official Agatha Christie company has evolved, from refusing anything adaptation, to the use of HP in so many formats.
It looks at various adaptations and spins all over the world, including a TV anime series in Japan on Hercule Poirot and Miss Marple (2004)! It’s supposedly excellent, with very faithful adaptations. I’m really curious!
There are also computer games, graphic novels (originally in French!), an even a good old card game (Death on the Cards).

The author talks obviously also of Sophie Hannah‘s new Hercule Poirot’s stories, and after David Suchet‘s, of Kenneth Branagh‘s movies (I can put it in the plural, as Death on the Nile is finally coming out soon. on February 11!), and of many more!

HAVE YOU READ THIS BOOK?
Any other good book on Agatha Christie’s work?
SHARE YOUR THOUGHTS  IN A COMMENT PLEASE

12 thoughts on “Book review: Agatha Christie Poirot: The Greatest Detective in the World”