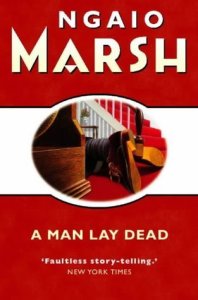 I tend to really like classic mysteries, and I have never read anything by Dame Ngaio Marsh (1895-1982), a New Zealand crime writer, so this is perfect!
I plan on reading it in November.

A Man Lay Dead (Roderick Alleyn #1) was published in 1934, this was her first novel.

“At Sir Hubert Handesley’s country house party, five guests have gathered for the uproarious parlor game of “Murder.” Yet no one is laughing when the lights come up on an actual corpse, the good-looking and mysterious Charles Rankin. Scotland Yard’s Inspector Roderick Alleyn arrives to find a complete collection of alibis, a missing butler, and an intricate puzzle of betrayal and sedition in the search for the key player in this deadly game.”

Dame Ngaio (/ˈnaɪoʊ/) Marsh, born Edith Ngaio Marsh, was a New Zealand crime writer and theatre director. There is some uncertainty over her birth date as her father neglected to register her birth until 1900, but she was born in the city of Christchurch, New Zealand.
Of all the “Great Ladies” of the English mystery’s golden age, including Margery Allingham, Agatha Christie, and Dorothy L. Sayers, Ngaio Marsh alone survived to publish in the 1980s. Over a fifty-year span, from 1932 to 1982, Marsh wrote thirty-two classic English detective novels, which gained international acclaim. She did not always see herself as a writer, but first planned a career as a painter.
Marsh’s first novel, A MAN LAY DEAD (1934), which she wrote in London in 1931-32, introduced the detective Inspector Roderick Alleyn: a combination of Sayers’s Lord Peter Wimsey and a realistically depicted police official at work. Throughout the 1930s Marsh painted occasionally, wrote plays for local repertory societies in New Zealand, and published detective novels. In 1937 Marsh went to England for a period. Before going back to her home country, she spent six months travelling about Europe.

All her novels feature British CID detective Roderick Alleyn. Several novels feature Marsh’s other loves, the theatre and painting. A number are set around theatrical productions (Enter a Murderer, Vintage Murder, Overture to Death, Opening Night, Death at the Dolphin, and Light Thickens), and two others are about actors off stage (Final Curtain and False Scent). Her short story “‘I Can Find My Way Out” is also set around a theatrical production and is the earlier “Jupiter case” referred to in Opening Night. Alleyn marries a painter, Agatha Troy, whom he meets during an investigation (Artists in Crime), and who features in several later novels. [Goodreads]

Have you read it, or any other novel by Ngaio Marsh?
What did you think?