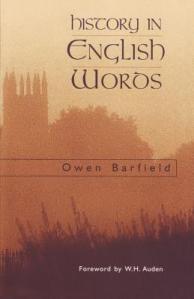 📚 History in English Words, by Owen Barfield
Published in 1926
Reading for The Classics Club – this was my latest spin…

I’m totally enjoying each line, connecting back to my early love of linguistics and philology.

“This popular book provides a brief, brilliant history of those who have spoken the Indo-European tongues. It is illustrated throughout by current English words—whose derivation from other languages, whose history in use and changes of meaning—record and unlock the larger history.”

📚 Looking for the Stranger: Albert Camus and the Life of a Literary Classic, by Alice Kaplan
Published in 2016
I got this free book at BEA 2016 and never took time to read it!!
Really good.

“The Stranger is a rite of passage for readers around the world. Since its publication in France in 1942, Camus’s novel has been translated into sixty languages and sold more than six million copies. It’s the rare novel that’s as at likely to be found in a teen’s backpack as in a graduate philosophy seminar. If the twentieth century produced a novel that could be called ubiquitous, The Stranger is it.
How did a young man in his twenties who had never written a novel turn out a masterpiece that still grips readers more than seventy years later? With Looking for “The Stranger”, Alice Kaplan tells that story. In the process, she reveals Camus’s achievement to have been even more impressive—and more unlikely—than even his most devoted readers knew.
Born in poverty in colonial Algeria, Camus started out as a journalist covering the criminal courts. The murder trials he attended, Kaplan shows, would be a major influence on the development and themes of The Stranger. She follows Camus to France, and, making deft use of his diaries and letters, re-creates his lonely struggle with the novel in Montmartre, where he finally hit upon the unforgettable first-person voice that enabled him to break through and complete The Stranger.
Even then, the book’s publication was far from certain. France was straining under German occupation, Camus’s closest mentor was unsure of the book’s merit, and Camus himself was suffering from near-fatal tuberculosis. Yet the book did appear, thanks in part to a resourceful publisher, Gaston Gallimard, who was undeterred by paper shortages and Nazi censorship.
The initial critical reception of The Stranger was mixed, and it wasn’t until after liberation that The Stranger began its meteoric rise. As France and the rest of the world began to move out of the shadow of war, Kaplan shows, Camus’s book— with the help of an aggressive marketing campaign by Knopf for their 1946 publication of the first English translation—became a critical and commercial success, and Camus found himself one of the most famous writers in the world. Suddenly, his seemingly modest tale of alienation was being seen for what it really was: a powerful parable of the absurd, an existentialist masterpiece.
Few books inspire devotion and excitement the way The Stranger does. And it couldn’t have a better biographer than Alice Kaplan, whose books about twentieth-century French culture and history have won her legions of fans. No reader of Camus will want to miss this brilliant exploration.”

📚 Midaq Alley, by Naguib Mahfouz
Published in 1947 – will read for The Classics Club and the Books in Translation Challenge

“Never has Nobel Prize-winner Naguib Mahfouz’s talent for rich and luxurious storytelling been more evident than in Midaq Alley, which centers around the residents of one of the hustling, teeming back alleys of Cairo. From Zaita the cripple-maker to Kirsha the café owner with a taste for young boys and drugs, to Abbas the barber who mistakes greed for love, to Hamida who sells her soul to escape the alley, these characters vividly evoke the sights, sounds and smells of Cairo. Long after one finishes reading, the smell of fresh bread lingers, as does the image of the men gathering at the café for their nightly ritual. The universality and timelessness of this book cannot be denied.”

📚  Bomber’s Moon (Joe Gunther #30), by Archer Mayor
Published in 2019
I usually refrain from reading a book in the middle of a series. I have never read any book by this author, but they say it could be the best in the series, and I won it, so I’ll give it a try.

“The murder of a small-time drug dealer snowballs into the most complex case ever faced by Joe Gunther and his VBI team.
It is said a bright and clear bomber’s moon is the best asset to finding one’s target. But beware what you wish for: What you can see at night can also see you. Often with dire consequences.
Bomber’s Moon is Archer Mayor’s latest entry in the Joe Gunther series and it may just be his best yet.
Two young women form the heart of this tale. One, an investigative reporter, the other a private investigator. Uneasy allies from completely different walks of life, they work together–around and sometimes against Joe Gunther and his VBI cops–in an attempt to connect the murders of a small town drug dealer, a smart, engaging, fatally flawed thief, and the tangled, political, increasingly dark goings on at a prestigious prep school.
While Gunther and the VBI set about solving the two murders, Sally Kravitz and Rachel Reiling combine their talents and resources to go where the police cannot, from working undercover at Thorndike Academy, to having clandestine meetings with criminals for their insider’s knowledge of Vermont’s unexpectedly illicit underbelly.
But there is a third element at work. A malevolent force, the common link in all this death and chaos, is hard at work sowing mayhem to protect its ancient, vicious, very dark roots.”

📚  A Fine Line, by Dan Burns
Published in 2017
I have met local author Dan Burns a few times at Chicago literary events, and I have enjoyed his No Turning Back.

“A Fine Line is a story about Sebastian Drake, a struggling writer working out of a dilapidated apartment in the city and trying to come up with his next story idea. Drake receives an unexpected visit from a man interested in hiring him for a project and who thinks he has just the solution to Drake’s writing challenges. He also thinks that Drake’s past and secret life with a shadow government organization is a valuable asset.
His proposition to Drake is simple: become a hired agent to investigate a cold murder case involving one of Chicago’s most powerful political families. The job comes with a decent paycheck, all the support he might need, and the types of real life experiences that can form the basis for great fiction stories.
This is a story about a man with a new lease on life, a man who leads a dual existence. By day, he is an aspiring author. By night, he is a rogue undercover and unknown vigilante. His biggest challenge is keeping intact the fine line of reality and fiction.” 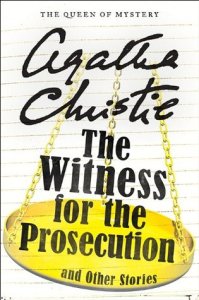 📚 The Labors of Hercules (Hercule Poirot #27) by Agatha Christie
Published in 1947 – Part of my project to listen to all of HP, for The Classics Club

I am really enjoying this one. Poirot realizes the origin of his name, reconnects with mythology, and decides to finish his career with 12 cases that will parallel the 12 labors of Hercules. The connection between the case and the myth can be hilarious, like in the first story – what connection could there be between a lion and a Pekinese dog?

📚 The Witness for the Prosecution and Other Stories, by Agatha Christie
Published in 1948 – Part of my project to listen to all of HP, for The Classics Club
This is an American collection, so it doesn’t follow the official number order in the series, but I will listen to this one as I follow the chronological order of publication

“The Witness for the Prosecution
1920s London. A murder, brutal and bloodthirsty, has stained the plush carpets of a handsome London townhouse. The victim is the glamorous and enormously rich Emily French. All the evidence points to Leonard Vole, a young chancer to whom the heiress left her vast fortune and who ruthlessly took her life. At least, this is the story that Emily’s dedicated housekeeper Janet Mackenzie stands by in court. Leonard however, is adamant that his partner, the enigmatic chorus girl Romaine, can prove his innocence.”

📚 I will probably also listen to 3 other books with Hercule Poirot. If I can listen to 4/month, I’ll be done by the end of 2021.
📚And if I have time, I’ll be listening to some French book, not sure yet which one

HAVE YOU READ
OR ARE YOU PLANNING TO READ
ANY OF THESE?
WHAT ARE YOUR READING PLANS FOR AUGUST?