A few years ago, historical fiction was the genre I read most. My reading taste has evolved, and now I need to find a unique historical novel to grab my interest. I definitely found it in Alina: A Song for the Telling.

I was indeed hooked with the first chapter. The author right away shows her talent for descriptions, for evocation of places and characters, especially when it comes to young Alina, a very rich personality, with conflictual feelings, and who needs to maneuver as a young girl in the society of her time.

The book opens with Guy’s funeral, in Provence. After losing his wife and young daughter Maria because of the sweating sickness, Guy couldn’t take it any longer. After his death, his brother Garsanc and his wife come to take over Guy’s property and finish raising Alina, 14 and her brother Milos, 15.

But the couple is so very different from Guy, who gave an education to all his children, including Alina, and even taught her how to play the lute.
Alina finds herself now too much confined, and she is definitely not ready to accept the suitors her aunt pushes her to accept, nor the only other open prospect: entering a convent.
Her dreams are very different: to become a trobairitz like Beatriz de Dia, that is, a woman troubadour.

So with her brother, she manages to convince her uncle that going on a pilgrimage to pray for their father in Jerusalem would be a good thing for all. So she leaves Provence with her brother in the Spring of 1173.

I cannot tell you more about her adventures, for fear of spoilers.
The description of their trip (with the traveling conditions and the different kinds of people they meet along the road) and of the different cities they went through were so good, and especially when they arrived in Jerusalem: smells, food, famous sites, I felt back there myself. 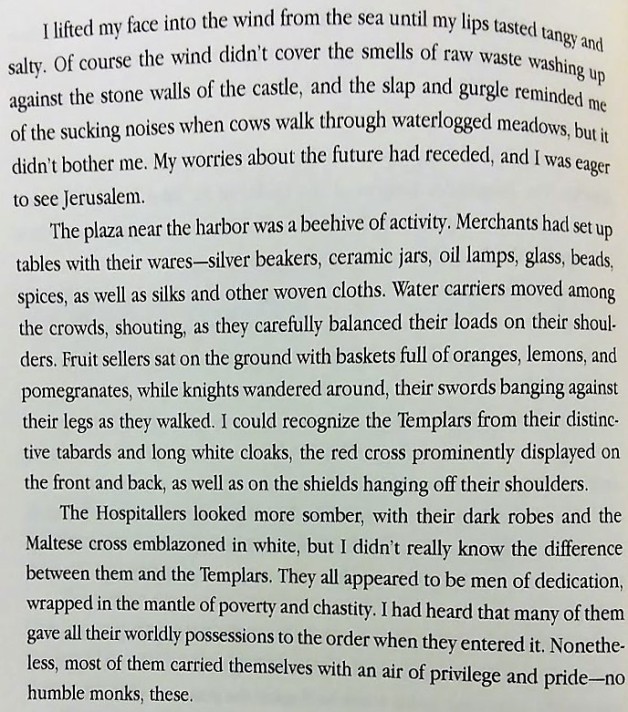 Through the various people Alina meets, the author managed to draw a wonderful portrait of the city, and also present the intricate political situation and machinations in the Middle East, yes already back then in the 12th century.
Some characters are historical (actually right after the Table of Contents, the book offers the list of the fictional and historical characters), like for instance Count Raymond of Tripoli or Count Stephen of Sancerre.
There’s also a great evocation of life at court, with all its intrigues.

I also really enjoyed the musical theme, with references to famous poets of the time (for instance Yehuda Halevi) and some of their texts. I was fortunate to find a nice rendering of the famous Quan lo rossinhols el folhos (quoted in chapter 5).
You meet also street musicians and discover famous dances of the period.
I really enjoyed it when I discovered the meaning of the subtitle.

At then end of the book, the author offers historical notes, especially on Stephen of Sancerre, and a glossary.
My only problem with the book is its category as Middle Grade. I guess because of Alina’s age, and the fact that (for once, thanks!!), there’s no sex nor major violence, the author didn’t feel comfortable classifying it as YA.
Middle grade may give the impression this is a very light book. It is actually an excellent and clever evocation of the society of the time.

The last chapter makes me hope we will meet Alina again, and I’m curious to see where.

VERDICT: With an unusual setting and period (Jerusalem in the 12th century), the author offers a captivating and excellent evocation of the society of the time. A middle grade historical novel I would recommend to all lovers of history, young and older.

ALINA: A SONG FOR THE TELLING is the coming-of-age story of a young woman from Provence in the 12th century who travels to Jerusalem, where she is embroiled in political intrigue, theft, and murder, and finds her voice.
“You should be grateful, my girl. You have no dowry, and I am doing everything I can to get you settled. You are hardly any man’s dream.”
Alina’s brother Milos pulled his face into a perfect copy of Aunt Marci’s sour expression, primly pursing his mouth. He got her querulous tone just right. Maybe Alina’s aunt was right. She could not possibly hope to become a musician, a trobairitz—impoverished as she was and without the status of a good marriage. But Alina refuses to accept the life her aunt wants to impose on her.
At the first opportunity she and her brother embark on a pilgrimage to the Holy Land to pray for their father’s soul and to escape from their aunt and uncle’s strictures. Their journey east takes them through the Byzantine Empire all the way to Jerusalem, where Alina is embroiled in political intrigue, theft, and murder.
Forced by a manipulative, powerful lord at court into acting as an informer, Alina tries to protect her wayward brother, while coming to terms with her attraction to a French knight.

Malve von Hassell
is a freelance writer, researcher, and translator.
Working as an independent scholar,
she published The Struggle for Eden: Community Gardens in New York City (Bergin & Garvey 2002)
and Homesteading in New York City 1978-1993: The Divided Heart of Loisaida (Bergin & Garvey 1996).
She has also edited her grandfather Ulrich von Hassell’s memoirs written in prison in 1944,
Der Kreis schließt sich – Aufzeichnungen aus der Haft 1944 (Propylaen Verlag 1994).
She has self-published a children’s picture book, Letters from the Tooth Fairy (Mill City Press, 2012)
and her translation and annotation of a German children’s classic by Tamara Ramsay,
Rennefarre: Dott’s Wonderful Travels and Adventures (Two Harbors Press, 2012).
She has published The Falconer’s Apprentice (namelos, 2015)
and Alina: A Song for the Telling (BHC Press, 2020),
and has another forthcoming historical fiction novel, The Amber Crane (Odyssey Press, 2020).
She is working on a biographical account of a woman coming of age in Germany during World War II.

HAVE YOU READ THIS BOOK?
What’s your favorite novel set in Jerusalem?
SHARE YOUR THOUGHTS  IN A COMMENT PLEASE

SEE MORE REVIEWS AND EXCEPTS BY CLICKING ON THE BANNER

10 thoughts on “Book review and giveaway: Alina: A Song for the Telling”