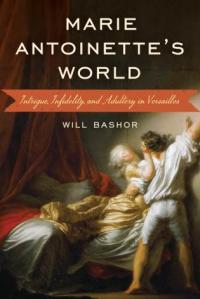 Buy the book:
Amazon | Barnes & Noble |
Publisher  | IndieBound
and other links available on the author’s page

Queen Marie Antoinette, Louis XVI’s wife, was never fully accepted by the French. Yet since her death, and mostly since the 19th century, she has received many signs of honor, bordering on the cult given to a martyr. With Marie Antoinette’s World: Intrigue, Infidelity, and Adultery in Versailles, Will Bashor dares debunk all the romantic views of the queen, thanks to his scholarly knowledge and research.

I have read some reviews of readers upset by this book and its revelations about Marie Antoinette’s infidelities and possible sexual diseases.
So I’d like first to highlight that Will Bashor is a scholar, and this is already the third book he has been writing on Marie Antoinette’s and her entourage. I highly encourage you to read Marie Antoinette’s Head: The Royal Hairdresser, The Queen, And The Revolution (2013), for which he received The Adele Mellen Prize for Distinguished Scholarship and Marie Antoinette’s Darkest Days: Prisoner No. 280 In The Conciergerie (2016).
The author has done an amazing amount of research, reading an extensive amount of primary and secondary sources, in English, but also in French.
If your knowledge of Marie Antoinette has been so far limited to the historical romance genre or even to movies, you are definitely in for a few surprises. However, if you have the opportunity to read other French historians, nothing here will shock you.

Let me now highlight what I found really good in the book.

The first part of the book focuses on the origin of Versailles and its use and development generations before the arrival of Marie Antoinette from Austria.
From a small hunting lodge it used to be, Louis XIII was the first to modify it. For him, as well as for Louis XIV, it was a place apart, where they could retire away from the public eye, and entertain secret and special affairs, with men or with women.
It’s only in 1666 that Louis XIV officially established his court there. It became even more a place of debauchery, of  adultery (there was a large number of illegitimate children at court) and homosexuality (whatever you think of the topic in 2020 is irrelevant to the fact that homosexuality was not accepted by the society of the time), sexual diseases (Louis XIV did syphilis-ridden), court intrigue, and scandal. Depravities continued under Louis XV, including a private bordello set up by his mistress in Paris, where he could enjoy the company of young girls (does this sound similar to a 2020 news story? Nothing new under the sun. We haven’t much improved!).

This first part is important, as it provides the background of Marie Antoinette’s social behavior, and shows that she arrived in “a den of iniquity”, a place and society where debauchery was very much ingrained. Note that there were also examples of incest at the court of Versailles. So she certainly was not a saint, but we could say she had mitigating factors, or extenuating circumstances.
Actually her own father had several mistresses, and her own sister had lesbian relationships (cf. my remark about homosexuality above) with an actress. You could argue that her mother had strong morals, and even introduced a “chastity court” in Austria, with severe punishment for the culprits, but alas she was too busy reigning and didn’t have much time to educate her own children.

The second part of the book focuses on Marie Antoinette’s arrival in Versailles. As you may recall, her marriage was not consummated for years. Maybe as a reaction to her frustration, or to the austere code of the court (remember that etiquette does not mean morals!!), she soon developed intimate relationships, both with men and women. There are letters and testimonies attesting to them, as well to the risky and even orgiastic parties she took part in and organized, later on (see also in part three). The famous “Nocturnales de Versailles”, with free exchange of sexual partners for an hour.
Another major element fueling the critiques received from her subjects is the huge amounts of money she gambled, and lost.

In that context, I was expecting a reference to the famous pun used by the French of the time. At least, that’s what I learned at school (in France). Marie Antoinette was nicknamed “l’autre chienne”. It sounds very close to l’Autrichienne, meaning the Austrian. The problem is, “l’autre chienne” means the other bitch! Not sure why the author doesn’t include this reference.

From these facts, and from the pamphlets and their content, it makes sense that part five focuses on sexual diseases. They were rampant in the 18th century, in all social classes, and were causing many miscarriages, still born births, or babies to live for just a few days. One of the common remedies of the time, mercury, certainly didn’t help!
A reader I know was upset that the author could suggest that Marie Antoinette herself had a sexual disease.
First, among scholars, he is definitely not the first one to assert it. Besides, when you visit la Conciergerie where she lived her last days before her death penalty, you learn about the big hemorrhage she was suffering from, and how it was difficult for her to change her undergarment, as there was constantly a soldier watching over her.

My own picture of Marie Antoinette’s cell in La Conciergerie

Vaginal bleeding is a common symptom of these diseases. The diagnostic can also be corroborated by her two sons’ symptoms before they died, at a young age. And from his own journal, we know that Count Fresen (one of her obvious lovers) was himself suffering from a sexually transmitted disease.
I also recently watched a French video about the history of chocolate. We know that in 1779, at Marie Antoinette’s request, a famous Parisian pharmacist invented little round pieces of chocolate (les pistoles), in which powdered medicine was introduced. The chocolate was there to hide the bitterness of the medicines against that type of disease. If you understand French, you can for instance watch around this moment of this video).

In this book, I also appreciated the many graphic details provided by the author, making Versailles and its people feel very real to the reader: for instance, back then, although the public could freely enter a large part of the castle, there were no latrines installed for them. And Marie Antoinette was really the exception in taking a bath daily, So next time you visit Versailles, imagine the stench, as people would relieve themselves in a dark corner, or wherever they could.

I only have a few objections against the book.
– A few minor repetitions (in chapter 9 for instance).
– And the graphology section inserted at the end of each part. Graphology is not a modern science, it was actually first introduced by the Italian Baldi in 1622. However, hand-writing has changed a lot over the centuries. I regret the author used the services of a contemporary graphologist, as it seems some studies of Marie Antoinette’s handwriting were already published in the 19th century. A famous forum entirely dedicated to Marie Antoinette mentions some references. I think it would have been more relevant. Although ultimately, I didn’t feel the author needed any of this to prove his point.
– I even felt this unfortunately lessened the scholarly level of the book. All the more so for the astrology sections! Astrology was indeed extremely important at the time, even more so than today, but again, I think it would have been easier to accept a study by someone more contemporary to Marie Antoinette’s world.

For me, these two elements of the book offered a huge contrast with the scholarly parts, such as the massive documentation of most of the author’s lines, the hundreds of notes, and the very long bibliography, including French and English books.

I actually suggest you just skip the graphology and astrology when you read the book, and you will be in the presence of an excellent historical study of Marie Antoinette’s real world, not the one defended by the romantic and idealistic views that are unfortunately too often presented by English speaking authors focusing on French topics.

VERDICT: A scholarly, refreshing, and honest look at Marie Antoinette’s world and morals.

HAVE YOU READ THIS BOOK?
Any other history books you have read on Marie Antoinette?
SHARE YOUR THOUGHTS  IN A COMMENT PLEASE

This riveting book explores the little-known intimate life of Marie Antoinette and her milieu in a world filled with intrigue, infidelity, adultery, and sexually transmitted diseases.
Will Bashor reveals the intrigue and debauchery of the Bourbon kings from Louis XIII to Louis XV, which were closely intertwined with the expansion of Versailles from a simple hunting lodge to a luxurious and intricately ordered palace. It soon became a retreat for scandalous conspiracies and rendezvous—all hidden from the public eye.
When Marie Antoinette arrived, she was quickly drawn into a true viper’s nest, encouraged by her imprudent entourage. Bashor shows that her often thoughtless, fantasy-driven, and notorious antics were inevitable given her family history and the alluring influences that surrounded her. Marie Antoinette’s frivolous and flamboyant lifestyle prompted a torrent of scathing pamphlets, and Bashor scrutinizes the queen’s world to discover what was false, what was possible, and what, although shocking, was most probably true.

Readers will be fascinated by this glimpse behind the decorative screens to learn the secret language of the queen’s fan and explore the dark passageways and staircases of endless intrigue at Versailles.

A brilliant, and sad, history of the French monarchy and its descent into hell. Reality, gossip, and myths about the last royalty of France meld into a fascinating account by a true connoisseur.
— Jean-Clément Martin, l’Université Paris, Panthéon-Sorbonne [on the publisher’s webpage]

Will Bashor
is the author of the award-winning
Marie Antoinette’s Head: The Royal Hairdresser, the Queen, and the Revolution and
Marie Antoinette’s Darkest Days: Prisoner No. 280 in the Conciergerie.
He holds a doctorate in international studies
from the American Graduate School in Paris
and is professor of global issues at Franklin University.
He lives in Barcelona, Spain.

In full compliance with FTC Guidelines, I received this ebook free of charge through the publisher, for review. I was in no way compensated for this post as a reviewer, and the thoughts are my own.