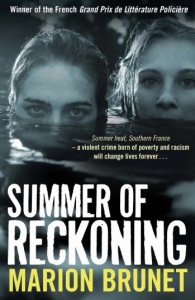 It is said that Marion Brunet is famous for her YA novels. For the first time, she launched into mystery with Summer of Reckoning and received a prestigious award for it in France.
Two teenagers are actually at the center of this novel, and through the dramatic events of a particular summer, they quickly grow up.

I have not read any other book by Marion Brunet, so I don’t know if the milieu she describes here is particular to this book. Anyway, she does an amazing job at describing low-life in a small rural French city.

Cavaillon is in Provence, a word that is enough to make American tourists drool. However, if you read online comments by current inhabitants of the city, you realize the place is far from the picture perfect bucolic place.

And this is definitely what Céline, 16, and her sister Jo, 15, experience on a daily basis. They are bored, there’s not much for them to do there, and their school records leave much to be desired. The usual French and all too true technological school profile. I taught in one of them for a couple of years, so I talk from experience.

Their father, a third generation Spanish immigrant, has it even worse. He works in construction, and though in his 30s, he already feels old and exhausted. Obviously he is in debt and feels humiliated, both by his in-laws who can at least live on their farm, and by the rich who hire him for very expensive and fancy construction projects.
Manuel is extremely angry at everyone and everything, at life in general. He does some fishy deals on the side to help financially, but it’s not much. So to forget his misery, he drinks. Consequently, he is violent, including with his young girls. Things are getting from bad to worse when nothing can hide it any longer: Céline is pregnant.

As the teenager refuses to tell who did that to her, her father decides it must be their young Arab neighbor, who could well be a dangerous terrorist, who knows?

The girls are not much supported by their mother either. Herself pregnant when he was very young, she married Manuel, and since, she basically fakes being happy and satisfied with her life. Her escapism is watching TV. She has a badly paid and exhausting job at a local school.

So really, nothing really uplifting in this novel, but if you are familiar with my reviews, you probably know by now that most contemporary French novels are not on the pink side of life. But the great strength of this novel is its perfect evocation of the social milieu.
Choosing such a theme could be tricky business, with the danger of falling into easy stereotype. The author does not fall into the trap, thanks to her nitty gritty descriptions and great sense of dialog, especially between the teenagers, as well as with Manuel’s coworkers on the construction sites.
All the characters feel basically stuck in their small town and their situation. This is also clear from the title in the original French version.The title literally means the circular summer. The end of the book ends indeed with a scene similar to the one at the beginning of the book. In between, life has become worse. The knowledge the teenagers have acquired that summer has nothing uplifting, it was actually a rough way of leaving childhood.
The one time Jo tried to discover another milieu, she realized the other kids were far from being better, and it all became a disappointing dead end.
Jo still dreams of leaving one day, but is it possible? The title doesn’t seem to open onto optimistic perspectives.

The social misery is seen also in the shabby housing developments.
And even nature suffers there, with pollution, and the plane tree disease that has been destroying so many trees in Provence and elsewhere.

The description of the characters is so true to life, as well as their dialogs, well, if you can actually call them dialogs or communication.
The translator did a great job on these.
Very few people are likable, but still, you would like them to have a chance. They still have self-respect for the most part, and don’t want to accept help from anyone. And even if the teenage girls criticize their parents, they stick to them and defend them against strangers.

The genre it’s been presented under is the only thing that can be disappointing. It is noir fiction, or crime fiction, I’ll let you discover this by yourself, but not mystery, as you can easily understand as early as page 13 who did what.

So if you are looking for a thriller, this is not the book for you. However, if you want a very well written book portraying life in small French cities with all its problems (poverty, racism, drugs, gangs, violence, anger, misery, despair), that’s the one!

Note on the publisher: for once, I don’t think I have ever seen that before, besides mentioning the translator, the publisher names the cover designer Eleanor Rose. I’m glad they did, as I think it’s really well done and conveys lots of elements and the ambiance of the book.

VERDICT: Excellent and intense evocation of life and misery in a small French city.

HAVE YOU READ THIS BOOK?
Any other great novel describing social misery?
SHARE YOUR THOUGHTS  IN A COMMENT PLEASE