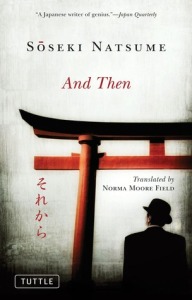 And Then
by Natsume Soseki
First published in Japanese in 1909
Translated by Norma Moore Field
With an Afterword
by the translator herself
Tuttle Publishing
ISBN13: 9784805311417
2011
Literary fiction/Japanese literature
246 pages
Goodreads

After reading Sanshiro, I realized this was the first book of a trilogy, so now to the second book: And Then.
I read it both for the Japanese Literature Challenge, and for The Classics Club.

It is in this trilogy (Sanshiro; And Then; The Gate), “that we see the emergence of the mature novelist.” If Sanshiro is the story of a timid young man, frightened and paralyzed by the new world he is thrown in, And Then is “about troubled adulthood”, and The Gate about middle age.

In my review of Sanshiro, I highlighted the importance of the historical setting. Soseki lived in “one of the most dramatic periods in Japanese history, the Meiji Restoration. It was a time of major social changes, for instance disrupting the traditional “filial piety to the family”, an essential theme in And Then.

Even though Soseki’s novels are not autobiographical per se, they do have elements connected to his own life. Let me highlight a few here.
For instance, we know that there was a secret woman in his life, and she happened to be his sister-in-law, a situation not too far from Daisuke’s, with the wife of his good friend.
Soseki was also an unwanted son, much like Daisuke.
And like his hero, he struggled for a long time before finding a direction in his life. He experienced “the painfulness of decision-making in life” and money problems.
When he was in London, rumors spread about his being mad. His mental health did deteriorate at the end of his life. A possible interpretation of the very last lines of And Then.

“Thanks to his father’s wealth, Daisuke has the luxury of having time to develop his philosophies and ruminate on their meaning while remaining intellectually aloof from traditional Japanese culture and the demands of growing industrialization.
Then Daisuke’s life takes an unexpected turn when he is reunited with his college friend Hiraoka and his sickly wife Michiyo. At first, Daisuke’s stoicism allows him to act according to his intellect, but his intellectual fortress begins to show its vulnerabilities as his emotions start to hold greater sway over his inner life. Daisuke must now weigh his choices in a culture that has always operated on the razor’s edge of societal obligation and personal freedom.”
Goodreads Synopsis

It was fascinating encountering the same themes in both books and noticing also how they evolved.
For instance, the “stray sheep” theme. If Sanshiro was mostly finding himself lost, as a result of involuntary circumstances, “Daisuke is an acutely self-conscious stray sheep,” and basically “irredeemable.”
We find here the same issues around marriage, with in the background a commentary  on “the nature of the relationship between love and society”, and the necessary choice between nature or social demands.
The innocence surrounding Sanshiro is gone in And Then. The “inclusio” (rhetorical term referring to “creating a frame by placing similar material at the beginning and end of a section” – Wikipedia definition) speaks volume:
“And Then opens ominously with a red double camellia falling on the floor. The camellia flower, which drops as a whole rather than petal by petal, was distasteful to samurai because it reminded them of falling heads”. And it ends with Daisuke trapped in a brutal and maddening totally red and burning image of the world.
Also, at the beginning, we find Daisuke experiencing the flow of his “crimson blood” in his heart both as a symbol of life and a precursor of death. Red fully equates to death at the end.

With his hand still on his chest, he tried to imagine the warm, crimson blood flowing leisurely to this beat. This was life, he thought. Now, at this very moment, he held in his grasp the current of life as it flowed by. To his palm it felt like the ticking of a clock. But it was more, it was a kind of alarm that summoned him to death.

The dominant theme of lack of courage and vacillation in Sanshiro is omnipresent again, now more as a result of personal proclivities. And Daisuke is fully aware of being a coward, he even abhors himself for his indecision (chapter 14). When finally (at the end of chapter 14) he does have the courage to act (he is himself “surprised at his own bravery and daring” and “at his readiness to face anything at any time”, chapter 15), it will lead him to disastrous consequences.

Chapter 15 actually presented this theme under a broader light. Could it actually be a sign of Daisuke’s lack of self-knowledge? How do you understand this passage in light of the whole book?

This was to be attributed neither to artifice nor to vacillation but rather to the flexibility of his vision, which allowed him to look in both directions at once. To this day, it was precisely this capacity that had always dampened his determination to advance single-mindedly toward a particular goal. It was not unusual for him to stand paralyzed in the midst of a situation. His posture of upholding the status quo was not the result of poverty of thought, but the product of lucid judgment; but he had never understood this truth himself until he acted upon his  beliefs with inviolable courage.
Chapter 15

The theme of ennui is also very present. I would interpret it as a sign of the Westernization of Japan at the time, at least in literature, if not in society. What do you think? I don’t know enough about the evolution of Japanese society to judge on that. Let me know if you have data about that.

Incidentally, I was surprised to find here a reference (in chapter 2) to the Pascha service in the Orthodox Cathedral of St Nicholas in Tokyo. A friend of mine went there. I had not realized it was that old, and I certainly didn’t expect Orthodoxy to come up in Soseki’s novels!

And this passage made me think of Colorless Tsukuru Tazaki And His Years of Pilgrimage, by Murakami:

Society appeared to him like a flat surface partitioned according to a complex color scheme. And he could only think that he himself had no color whatsoever. Chapter 16

There were some nice descriptions of nature, for instance on rain, or the moon, another Murakami theme:

The moon rose pure and white as if it had been washed.
Chapter 14

This book didn’t have an introduction like the fabulous one by Haruki Murakami to Sanshiro, but it had a similarly excellent Afterword by the translator, Norma Moore Field. Many passages in quotation marks above come from this afterword.
In it, I also discovered that Soseki wrote A LOT. There are actually 17 volumes of his writings! He wrote in many genres, including haiku and essays –he even wrote a major study on Tristam Shandy, a book that’s on my Classics TBR list!
His Theory of Literature seems an important text (1907). Norma writes that “he wrote a considerable number of essays, which contain some of the most beautiful prose in Japanese literature”.

I’m grateful to Meredith for organizing this yearly challenge, which gives me an excuse for focusing on these amazing authors.

VERDICT: And Then is a wonderful example of the high quality of Japanese classic literature, at the confluence of the art of writing and social evolution.

HAVE YOU READ THIS BOOK?
If you have, I would appreciate your input
on questions I asked in my review.
SHARE YOUR THOUGHTS  IN A COMMENT PLEASE

10 thoughts on “Book review: And Then”