Elizabeth ‘Bird’ Carpenter has a wonderful singing voice, and music is her chief passion. When her father persuades her to marry horse-dealer Christopher Knepp, she suspects she is marrying beneath her station, but nothing prepares her for the reality of life with Knepp. Her father has betrayed her trust, for Knepp cares only for his horses; he is a tyrant and a bully, and will allow Bird no life of her own.

When Knepp goes away, she grasps her chance and, encouraged by her maidservant Livvy, makes a secret visit to the theatre. Entranced by the music, the glitter and glamour of the surroundings, and the free and outspoken manner of the women on the stage, she falls in love with the theatre and is determined to forge a path of her own as an actress.

But life in the theatre was never going to be straightforward – for a jealous rival wants to spoil her plans, and worse, Knepp forbids it, and Bird must use all her wit and intelligence to change his mind.

Based on events depicted in the famous Diary of Samuel Pepys, Entertaining Mr Pepys brings London in the 17th Century to life. It includes the vibrant characters of the day such as the diarist himself and actress Nell Gwynne, and features a dazzling and gripping finale during the Great Fire Of London.

The third in Deborah Swift’s atmospheric trilogy, bringing to life the women in Pepys’ Diary. Each novel features a different character and can be read as a stand-alone book.

‘A remarkably beguiling read. It transported me to the glitter and filth of seventeenth century London’ – Martine Bailey, author of The Almanack

Praise for the Pepys Trilogy

‘Swift is a consummate historical novelist, basing her books on immaculate research and then filling the gaps between real events and real people with eloquent storytelling, atmospheric scene setting and imaginative plot lines’ – The Visitor

In the King’s playhouse rehearsal chamber, Stefan tilted back in his chair, stretched out his stringy legs in their pale-coloured hose, and leant back against the wall, script in hand. He lowered his head to squint at it, for it was covered in crossings out and was difficult to decipher. He sighed; another small part, so his pay would be down again.

‘What’s the line after, “Verily I do”?’ he asked old Will Wintershall, one of the assembled actors. ‘Is that me, or is it Don Roderigo?’

‘You, ducks,’ Mrs Corey said, lowering her ample bottom into the mock medieval throne that was next to Will’s chair. She took a moment to strike a flint and light her pipe. ‘Though I don’t suppose it will make much difference. This play of Dryden’s drones on and on like a leaky pipe. Never read such foolishness in my life. How am I supposed to bring life to this? Julia’s an empty-headed turkey.’ She sucked and released a stream of smoke. ‘I’m surprised Killigrew took it on; he’s usually got more sense. It’ll flop I tell you, just like his last.’

‘I’ve hardly got any decent lines, and I can’t see how it’s supposed to be funny,’ Will said. ‘Where does Dryden get them from? They get more goosey each year.’

‘He’s got no sense of humour,’ Mrs Corey said. ‘He fancies himself as a poet, that’s why it’s so long-winded. But he’s a boot-scrubber, if you ask me. I was in Herringman’s bookshop last week, and under the counter they’ve got a copy of Dryden’s poems in praise of … guess who …?’

‘Only an elegy to our great Lord and Protector Cromwell, that’s who.’

‘No!’ Mohun, who was lounging in the window seat, slapped his thighs and grinned in scandalised glee.

Mrs Corey waved her pipe, ‘And now he’s the king’s lap-dog and he’s writing this dross where the women are all behaving like simpletons. I can’t believe any woman would fall for a bonehead like Gonsalvo, the way he’s written it.’

‘Even Hart’s handsome face won’t help that script. It’s got three women in it, that’s the only reason he took it. He wants more women on stage,’ old Will Wintershall said. ‘More women means more backsides on benches, so Killigrew asked Dryden to write something with more skirt. He turned down Hart’s play for this rot. I ask you, what’s the world coming to?’

‘And that’s not all,’ Mohun said. ‘Killigrew’s writing one himself now – and it’s all women. What the devil shall we do when the whole business is taken over by a horde of scolding women?’

‘Hey!’ Mrs Corey leapt up and slapped him playfully across the beard with her script. ‘Less of that! We’ve been kept out of the profession long enough, and it’ll soon level out. Theatre’s supposed to reflect the world, and there can’t be a world with no women in it, can there?’

‘Or one with no men in it,’ Mohun retorted.

‘Don’t see why not,’ Peg Hughes said, looking up from her script. ‘It’d be a better one.’

Deborah Swift is the author of three previous historical novels for adults, The Lady’s Slipper, The Gilded Lily, and A Divided Inheritance, all published by Macmillan/St Martin’s Press, as well as the Highway Trilogy for teens (and anyone young at heart!). Her first novel was shortlisted for the Impress prize for new novelists.

She lives on the edge of the beautiful and literary English Lake District – a place made famous by the poets Wordsworth and Coleridge.

Thursday, November 21
Excerpt at The Lit Bitch
Review at Reading the Past

Thursday, November 28
Feature at To Read, Or Not to Read

Friday, November 29
Review at Locks, Hooks and Books
Guest Post at What Is That Book About

Monday, December 2
Review at Passages to the Past

Wednesday, December 4
Interview at Passages to the Past

During the Blog Tour, we are giving away a signed copy of Entertaining Mr. Pepys! To enter, please use the Gleam form below.

– Giveaway ends at 11:59 pm EST on December 12th. You must be 18 or older to enter.
– Paperback giveaway is open internationally.
– Only one entry per household.
– All giveaway entrants agree to be honest and not cheat the systems; any suspicion of fraud will be decided upon by blog/site owner and the sponsor, and entrants may be disqualified at our discretion.
– The winner has 48 hours to claim prize or a new winner is chosen. 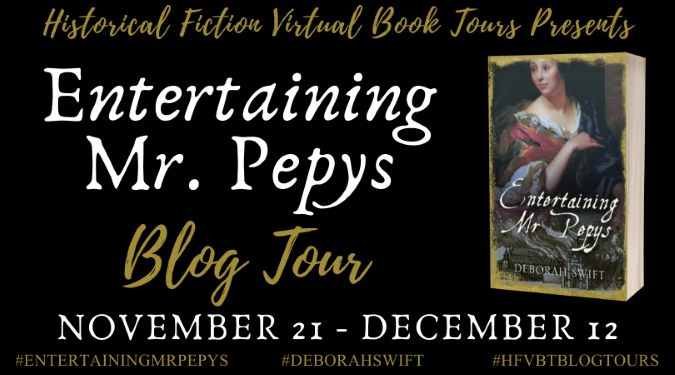