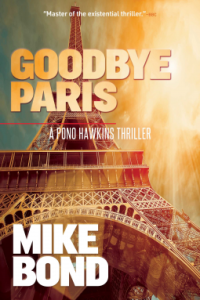 I often rant against tourists who go gaga over Paris and France, and many novels play with that romantic view of anything French. France is nice for tourists, but living there day in day out can actually turn into a very different story.
Well, if there’s one positive thing we can highlight about Goodbye Paris, is that the author certainly doesn’t present a rosy and touristy picture of Paris.

After a tough time in Afghanistan, where he almost died at the hands of Mustafa, an ISIS terrorist, Special Forces veteran Pono Hawkins is having some fun in Tahiti, spending his days surfing and his nights with three women… Until his friend Mack calls for his help in Paris: it seems indeed that Mustafa is still alive, and even preparing major damage in the French capital city.

I liked the idea of the plot, quite plausible (the thick glass wall around the Eiffel Tower was not built for aesthetic purposes), all the twists and turns, and some super suspenseful scenes.

Some readers have problems with what they call the islamophobia of this book. Actually, the author sometimes specifies we are dealing here with terrorists. And the elements he highlights in the Koran are there, whether you like it or not – yes, I did spend a whole week of workshop and studies on the Koran a few decades ago.
The author even introduces interesting concepts in Muslim mentality and practice, such as the concept of taqiya.

However, I had a hard time with the character of Pono, too  showy, using way too many f* words – even though the author explained to me that men working in those forces use actually many more. It could well be the truth, but it’s not what I find enjoyable in the writing of a book.

Also, some elements don’t match the main protagonist’s name. It is said that pono means the right, good and moral way to live. However, the scene where Pono attacks a guy who looks like Mustafa, and leaves him half-dead and handcuffed, does seem to me a strange way of exercising justice. Same for the torture applied with Anne against two guys who denying knowing where the prisoners are held.

The passages on Notre Dame were confusing. The cathedral is presented here as basically totally destroyed, though the book isn’t featured as a dystopia. It may be weakened in its structure, but it is still standing, and let’s hope the author is not a prophet of doom on this point. Terrorism as the cause of the fire was also officially rejected. Unless the author has access to some special sources of information…

And it would be good indeed to know more about his sources at many levels in the book, for instance about French politics, about the sharia applied in some Paris neighborhood, about Islamic strongholds where French cops no longer go, and other controversial topics. (NB: Fox News is not considered a reliable source of information)

The book being a thriller, I found there were too many unnecessary steamy sex scenes as well. To me, the book fell permeated with a lot of very negative energy.

And too many and unnecessary recap passages. The book could definitely do with some editing.

As for the use of French in the text, there are mistakes, as usual, for instance a confusion between the use of tu/vous on page 40, and mostly the annoying spelling of the word périphérique, constantly (and often used) spelled ‘péréphérique’. Though it’s simply and clearly from the Greek prefix peri-, found in words like perimeter.
And “pain au chocolates” on page 207!

As a whole, Goodbye Paris can be found enjoyable at the superficial level of action and suspense, but at a deeper level, it left me puzzled and uncomfortable, even though, as you know, I read a lot of thrillers and crime fiction.
The book often made me think of the popular French author Gérard de Villiers (1929-2013), with his bestseller SAS series. It’s not a great compliment from my part, but if that’s your cup of tea, then you should definitely try this book.

HAVE YOU READ THIS BOOK?
Any other good novel
focusing on terrorism?
SHARE YOUR THOUGHTS  IN A COMMENT PLEASE

In full compliance with FTC Guidelines, I received this book free of charge from the author. I was in no way compensated for this post as a reviewer, and the thoughts are my own.

Author of eight best-selling, critically-acclaimed novels,
an award-winning poet, ecologist, and war and human rights journalist,
Mike Bond has worked and lived
in many dangerous and war-torn regions of the world.
Based on his own experiences,
his novels portray the innate hunger of the human heart for good,
the intense joys of love, the terror and fury of battle,
the sinister conspiracies of dictators, corporations and politicians,
and the beauty of the vanishing natural world.

Buy the book on Amazon, Barnes & Noble, Kobo, or Indiebound

You can enter the global giveaway here
or on any other book blogs participating in this tour.
Be sure to follow each participant on Twitter/Facebook,
they are listed in the entry form below

Global giveaway open to all
10 winners will receive an ebook

CLICK ON THE BANNER TO READ MORE REVIEWS,
AND EXCEPT