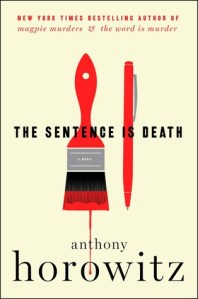 A new book by Horowitz is always a treat. Especially having read The Word is Murder, with its unique inserting of the real life author in the narrative fabric of the mystery, I couldn’t wait to see what would happen to Anthony and Hawthorne in volume 2: The Sentence is Death.

As we are in the same series as The Word is Murder, we obviously meet the same unexpected duo, with the author Anthony himself being asked by the quasi-Sherlock-weird-former-detective Daniel Hawthorne to write his life. To do so, he accompanies him in a case.

Hawthorn is still quite obnoxious, and very secretive, and Anthony is determined to solve the case by himself, and to figure out what Hawthorne has to hide.

If you want my advice, you’ll steer clear of Hawthrone. He’s trouble. Everyone knows that. You stick around with him, you’re going to get hurt.
Chapter 21

Other characters are interesting as well, such as the official “malign, borderline psychotic” Detective Inspector on the case, a woman who also wants to be the one and only to solve the case.

The plot was complex from the start and got more and more so. To say it in its basics, divorce lawyer Richard Pryce is found killed with the use of a bottle of very expensive wine. The novel actually started on the slow side, but then, as things started unraveling, it got really intense and more and more intriguing.

As for Anthony, he is at the same time trying to shoot episodes of Foyle’s War.

Some clues were super clever and fun, particularly around the number 182, found near the body. And interestingly enough, some details are actually given in an Appendix, after the author’s Acknowledgements.

Anthony writing a book within a book, there are passages on the world of books, bookshops, editors and publishers, and occasional interesting snippets on the art of writing:

I sometimes think that it’s actually a good definition of creative writing: to unlock door and take readers through the other side.
Chapter 9

And obviously, with these two titles, I’m really eager to discover even the mere title of book 3 in the series (we know Anthony signed a 3-book contract with Hawthorne), and I have tried to guess.
I also want to know more about the mystery behind Hawthorne himself.

VERDICT: Complex mystery à la Sherlock Holmes, with an unexpected duo, and a fascinating mix of reality and fiction.

HAVE YOU READ THIS BOOK?
What do you think the next title will be?
SHARE YOUR THOUGHTS  IN A COMMENT PLEASE

In full compliance with FTC Guidelines, I received this book free of charge from the publisher through Edelweiss. I was in no way compensated for this post as a reviewer, and the thoughts are my own.

10 thoughts on “Book review: The Sentence is Death”