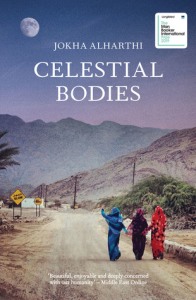 One asset of the Man Booker International 2019 longlist was to have us travel to lots of different places. I would bet that many of you have never read a book about Oman. I had not either, before Celestial Bodies, even though my traveling through books has been quite diversified.

For once, I’ll start with the official synopsis:

In the village of al-Awafi in Oman live three sisters. Mayya marries after a heartbreak. Asma marries from a sense of duty. Khawla rejects all offers while waiting for her beloved, who has emigrated to Canada. Elegantly structured, Celestial Bodies is the story of the history and people of modern Oman told through one family’s losses and loves.

And that’s about it. It was an interesting cultural piece, especially as it presents a world not many of us living in the US or Europe would know.

The narration is alternated between that of a male, mostly Abdallah, (Mayya’s husband) I the first person narrative. He is on a plane to Frankfurt, and he reminisces the life and people of his family and clan, many years later.
The other chapters  are in the third person narrative, and are told from the perspective of the women of the clan, closer to the times of the events.

The narrative focuses on all the family’s and clan’s doings and relationships, with the normal measure of intrigues.
It was a good thing the author provided a genealogy tree, to keep track of who’s who.

Some interesting cultural differences were highlighted, like for instance the fact of never asking what you had to eat, and what’s for supper.
There were also good elements, though nothing surprising here, about evolution between generations, for example about the view on slavery. It was a given for the elderly, and they just couldn’t understand what it meant that the government had officially put an end to it.

I liked the descriptions about daily life, religious rituals, like marriages and funerals, exorcisms, the mix of Islam and superstitions; and there were neat passages about poetry.

Did it deserve to be on the MB12019 shortlist?
I personally don’t think it did.
Again, it was interesting culturally speaking, but the fact that it comes from an unusual part of our planet in the literary world, or that it was published by a small press, for me should not really count; and/or by a woman and/or a Muslim author. I’m all for small presses and literary diversity, including gender and religion, but this does not necessarily make the greatness of a book.
I’m getting tired of the hype built around some books, mostly because they are under one of the above categories.
And literary speaking, I really didn’t see anything so outstanding here that it should be on the shortlist.

VERDICT: A nice introduction to life in Oman.

HAVE YOU READ THIS BOOK?
Any good novel on Oman?
SHARE YOUR THOUGHTS  IN A COMMENT PLEASE