I already mentioned that The Man Booker International 2019 Shadow Panel made me discover a French author unknown to me. I’m very happy to present another one today. I had heard about Annie Ernaux, but had never read The Years, nor anything by her. It’s sad that in all my studies in France, I was not exposed to contemporary authors like her (she was born in 1940), even though she won a lot of literary awards.
And this is so good! Hang on, this is going to be a long review, but hopefully, you will jump on the book right after reading my prose!

And indeed, The Years is definitely a book you have to read if you are interested in France and French literature, or any good contemporary literature. In only 237 pages (in the English translation, and 253 pages in the French folio edition), Annie Ernaux manages to present an impressive fresco of roughly the second half of the 20th century –from WWII to 2006 to be more specific.

Starting with pictures of herself (later on with home-made films), first as a baby, and then at different periods all along her life, she presents her memory in fragments, a fresco of her life, of her family, her country, and the world at large, with all the evolution experienced during those years.
Evolution in herself, in her body, in her condition as a woman, with a special emphasis on this element, as she experienced life and society through her body as a woman. Her book “convey(s) the passage of time inside and outside of herself” (page 151).

Evolution in her family, as a grand-daughter, a daughter, a wife, with all she went through including a divorce, as a mother and as a grand-mother. Evolution in her country, with a massive amount of cultural, social, and political references. And evolution in the world, with the most important historical landmarks, the huge changes in technology, and the changes in mentality.
She goes through everything: school, church, TV, business, technology, consumer society, immigration, TV, the media, “the new world order”. The new mentality of the “whatever generation”, the movement of generations, the rise of unemployment, the passage to the year 2,000, terrorism, etc.
This passage on our consumer society is a good illustration of her style:

There’s of course an important section on May 1968 and the liberation movement with its sexual liberation, or was it a liberation?:

In order to think, speak, write, work, exist in another way, we felt we had nothing to lose by trying everything
page 102

But, as strongly emphasized with the very first sentence:

All the images will disappear.

Everything will be erased in a second. The dictionary of words amassed between cradle and deathbed, eliminated. All there will be is silence and no words to say it. Nothing will come out of the open mouth, neither I nor me. Language will continue to put the world into words. In conversation around a holiday table, we will be nothing but a first name, increasingly faceless, until we vanish into the vast anonymity of a distant generation.
page 15

The increasingly rapid arrival of new things drove the past away.
page 83

And with the arrival of artificial internet memory (cf. page 212), we no longer have memory, just recollections.

Hence the importance to try to hang on to the world through this Proust-like endeavor, in attempting to stop the loss of images and words. However, it’s hard to prevent time erosion, and even post war memories fade little by little in her family and the world.
We can also assume this personal and collective work memory is a way of conjuring the memory of Ernaux’s own mother, who suffered from Alzheimer (as presented in one of her other books, A Woman’s Story/Une femme).

She would like to assemble these multiple images of herself, separate and discordant, thread them together with the story of her existence, starting with her birth during WWII up until the present day.
page 170

I was totally captivated by the atmosphere of the book, with lots of references to songs, for instance. These are songs and cultural references I know for experiencing them in my own days, but I’m actually wondering how the book works for people who didn’t grow up in France, or even for much younger French people who no longer know about these references. You know, like in the US today, many kids have no idea who the Beatles are. Would all this sound just too foreign, even if some of these references have been translated into English by the Canadian translator?

There are also little details that I’m sure sound totally weird for teens: “watching cars go by and writing down the department numbers from the license plates.” (page 52). What type of game is that?? Well, believe it or not, that was a major game for me as well in the 70s, as there were not too many cars passing in front of our house. Interestingly enough, I was born two decades later than Ernaux, but as I lived in a much smaller place than her, a little village of 250 inhabitants for my first 10 years, I still experienced it in the 70s and early 80s what she experienced in the late 40s! Including seeing my grand-mother take our dirty clothes in a big wicker basket and walk down to the center of the village to go wash them at the lavoir with the other women of the village!

And all along the narrative, we see this very book in progress, taking shape little by little, as the author wonders when and how to do it.

Now’s the time to give form to her future absence through writing, start the book page 226

She will go within herself only to retrieve the world, the memory and imagination of its bygone days, grasp the changes in ideas, beliefs, and sensibility, the transformation of people
page 228

So The Years is a very personal memory, but you can feel it as totally yours if you share the same cultural landmarks. One element used to create this double effect is the use of pronouns, both the personal nous and the impersonal on, but also the she, and the I, both a real personal je, and a “Je transpersonnel”.
This double dimension is an amazing feat to achieve, and I don’t think I have ever experienced this in any other book I have read, certainly not to that extent. I think this aspect was well done in the translation, taking into account that it’s basically impossible to convey in English the full values of on/nous.

As for the form of the book, I’d like to speak more of the translation itself, as actually the Man Booker International is a translation award. Let’s start by comparing these pages: 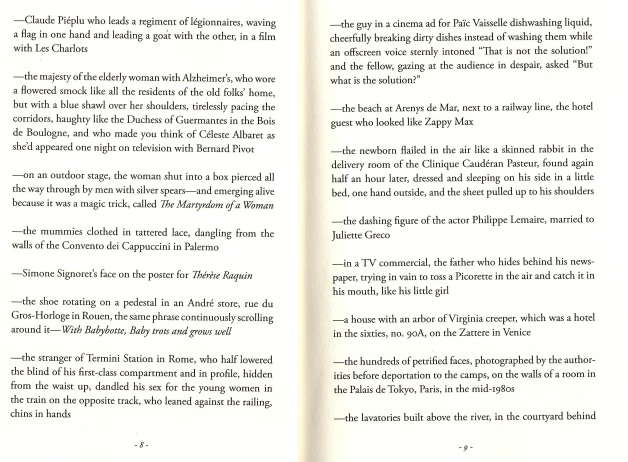 I don’t understand why the translator felt the need to add punctuation, and I believe this added some organization to the text that doesn’t fit with the original plan. This is not supposed to be a list, rather a litany, or a jigsaw puzzle. With sentences thrown around without punctuation between them, a bit like sowers sowing their seeds in the wind. And I really enjoyed the alternation between this form and longer paragraphs. In its form, the book ends as it started with a similar juxtaposition of short sentences, with a kenosis in the writing and the content.
I could highlight other problems in these 2 pages, like the detergent translated as Païc Vaisselle. No, it’s not Païc [pronounced pah-ik], but Paic, pronounced [pek].

The English version of the book contains a Translator’s note at the end of the volume, where Alison L. Strayer explains a few of her choices. She mentions different speeds in the French narrative. Yes indeed, some paragraphs have much longer sentences. But honestly, I actually didn’t feel any of this in her English translation.
Also, I’m perplexed why she chose to translate some references and not others, and why insert some footnotes at all. Actually, some footnotes refer to things that anyone could look up on the Internet to see what it is, like le CAPES for instance. Whereas some much more obscure references are not explained. Could it be that the translator herself, who probably didn’t grow up in France, had no idea what these references actually were about? This is definitely the type of books you absolutely need to translate as a tandem, with a French person who grew up in France, and an Anglophone writer.

When I present world literature, I often write about the fluidity of the writing, about not noticing this was a translation. Unfortunately, I cannot say so about this book. Maybe because of the large number of necessarily untranslated words, all along I felt it WAS a translation, and I was often perplexed by the choice of words in English. So much so that I decided to read it as well in French.

The very last sentence itself didn’t work for me:

Save something from the time where we will never be again.

I really don’t perceive “plus jamais” has having a “never again” value here –it can in other contexts. We are not in the mode of repetition here, but rather of continuation, or lack of. Imagine the Raven croaking “never again”…

So as a book with its content, words, and form in French, the work is absolutely stunning and probably among the best books I have ever read.
But considered in its English translation for the Man Booker International award, I’m a bit disappointed. This is a dilemma as a member of the shadow panel, as we are judging the book in its translated form.

Now, another major issue, again not in itself, but as part of the longlist for such an award, is the nature itself of the work. More than a simple autobiography, The Years is both a microcosm and a macrocosm, an auto-sociology, and certainly not a novel! Never when I read the book did I feel I was reading a novel.
There were some heated discussions before the longlist was revealed, about including the book in the eligible titles or not. The award is for a novel.
Even though Annie Ernaux is presented has an author usually using the autobiography/sociology genre, the book is considered as a novel by French book sellers. Is it a marketing thing, as readers tend probably to buy more novels than autobiographies? I have previously referred to this French tendency to write auto-fiction, a genre that in beyond me, to tell the truth. It’s either an autobiography or a novel, but not both, and certainly not The Years. That’s also what the Library of Congress thinks, classifying it in “Biography. Biography and autobiography. Personal Memoirs.
The Man Booker International Judges decided to follow the French classification, and so they deemed it eligible. I would be most happy to have The Years win the award, for its much needed international recognition and exposure, but still, it really is not a novel. Another proof is that in 2018, it won the 31st Annual French-American Translation Prize for… non-fiction.

Should it be on the MB12019 shortlist?
Yes! And possibly the winner!

VERDICT: An impressive personal and collective memoir of the first half of the 20th century. A contemporary masterwork.

HAVE YOU READ THIS BOOK?
Any other similar book this makes you think of?
SHARE YOUR THOUGHTS  IN A COMMENT PLEASE

16 thoughts on “Book review: The Years”