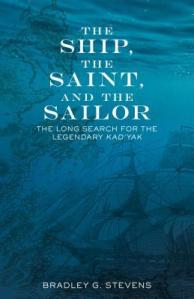 The Ship, the Saint, and the Sailor:
The Long Search for the Legendary Kad’yak
by  Bradley G. Stevens
Alaska Northwest Books
10/16/2018
Genre: Nonfiction/History & Biography
Pages: 280
Goodreads

As an Orthodox Christian, I’m always interested in books related to saints. Apart from the obvious hagiography, there are some really good novels, such as The Mirrored World, a historical novel based on the life of Saint Xenia, and the amazing YA Icon. So when I saw The Ship, The Saint, and The Sailor had something to do with Saint Herman of Alaska, I jumped on board.
Apart from the original story, or legend according to others, there’s actually not much on Saint Herman in this nonfiction. Though of course, there would be no such book without Saint Herman. But anyway, I found the book really fascinating. Here is what this is all about.

The book often reads like a thriller and a treasure hunt.
“On March 30, 1860, the Kad’yak set sail from Kodiak, Alaska, bound for San Francisco with a shipload of ice.” This was a common trip, ice being at the time sought after for refrigeration, but also a luxury item for rich Californians who had a taste for cold drinks – before the invention of the artificial icemaker in 1867. The boat had made this trip many times, and Captain Illarion Arkhimandritov was very experienced and skilled both as a navigator and a cartographer.
Before leaving, he had promised a woman he just met to stop and have a prayer service held at Saint Herman’s grave on Spruce Island. But busy and preoccupied with his journey, he left the island, remembering too late what he had promised.
The ship sank a few hours after its departure and the place and position of the wreck could make us believe that Saint Herman punished the captain. All on board survived.

Through his profession, the author (a marine biologist, now a tenured Full Professor of Marine Science) heard about the accident. Close to 15 years after the catastrophe and after lots of research, he organized a team of divers to try to find the wreck. Easier said than done.
To locate the ship, he had to study many documents, mostly in Russian, some seeming contradictory.
And he could not do this by himself. Gathering a crew of professional and dedicated persons is a hard work. Some people always try to gather all the glory for themselves, and are ready for that to betray a good cause.
Archaeology diving requires also a lot of expensive equipment. Funds were then needed. Another frustrating part of the project was to convince people and organizations of the importance of the search, and to make them agree to fund it.
It actually turned out to be “the oldest known shipwreck site in Alaska”.

I knew nothing about marine archaeology and that type of diving, or any diving for that matter, and all the detailed explanations were fascinating. Also on preserving that type of artifacts.

There’s obviously a chapter on the life of Saint Herman, who “dedicated himself to preaching ad teaching the Natives”.
But the book is also the history of the Russian-American Company (RAC) and of the ice trade.
And there are many passages on the local native Alaskan culture. In fact, the work is a tribute to the importance of honoring this culture and doing all that is possible to preserve its past, its history, and treasures.

Many pictures are included as well as maps, the Captain’s log, News releases, and the description of all the Kad’yak artifacts found by the team. Plus abundant end notes, and a long list of resources, books and websites.

VERDICT: Fascinating real life treasure hunt, looking for Alaska oldest known shipwreck, and what it can reveal about history.

HAVE YOU READ THIS BOOK?
Or any other book about shipwrecks?
SHARE YOUR THOUGHTS  IN A COMMENT PLEASE

In full compliance with FTC Guidelines, I received this ebook free of charge from the publisher through Edelweiss. I was in no way compensated for this post as a reviewer, and the thoughts are my own.

2 thoughts on “Book review: The Ship, The Saint, and The Sailor”