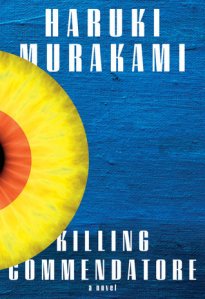 In just a few days, I devoured this new 680 page novel by Murakami, and I’m still a bit stunned by its beauty, and disappointed I’m done. So far, I kept saying 1Q84 was my favorite by him, but now Killing Commendatore replaces the top place in my chart.
There’s something in Murakami‘s writing (or I should say, in his translator’s,  kudos to Philip Gabriel!) that I have not find in any other writer to that extent: I will call it a flow.

Words, sentences, and dialogues, keep flowing. So I start reading the opening line, and I can’t stop reading.

this is the opening page

This flow has nothing to do with the usual page-turner effect you may experience while reading thrillers. There’s indeed an element of suspense in Killing Commendatore, or in 1Q84 for that matter, but most of it is literary fiction.

The un-named first person narrator, a young painter separated from his wife, lives by himself in an isolated area in the mountains, in Tomohiko Amada’s house, a famous artist, now in a retirement home on the threshold of death. When the narrator finds an unknown painting by Amada, life is no longer the same for him.

Killing Commendatore is a major reflection on art, or more broadly on artistic creativity. As a painter myself, I was fascinated by all the details about painting and the process of creating art. Rereading the prologue when you are done with the book is very interesting in that respect.

Murakami is a fine connoisseur of music, I’ll come back to that in a minute, but I’m not sure he has ever practiced painting, so this book is all the more impressing. You could think its author was a full time painter. Not mentioning all his amazing metaphors, and double-metaphors (a joke for those who have already read the book!)

Obviously, if you have some musical culture, you will automatically think of opera when you read the title. And you are right, it’s another major element of the novel. Which was really cool, to have the Commendatore show up in here! Though for a long while, I was thinking he was presenting himself under the traits of another character of the book. Murakami is a great lover of jazz, and jazz is present here too, but also of classical music, and there are tons of references to it here, as Amada’s house has nothing but classical music.

The book has been presented like a homage to The Great Gatsby. The Great Gatsby has never impressed me, to say the least, so if this had been used to advertise another book, I would have passed. Thankfully, I’ll dive into any Murakami book without reading anything about it, and I didn’t see that. I saw it afterwards, and I disagree. Yes, you may have a few parallels between Nick and Menshiki (by the way, another “colorless” –that’s the meaning of his name—character, like Tzukuru Tazaki in another excellent book by Murakami), for instance the fact that he lives in a huge and isolated mansion. But that’s about it. The reasons why Menshiki lives there have nothing to do with Jay’s.

Many times, Killing Commendatore made me actually think about another classic, Russian this time: The Master and Margarita, also because of the character of Menshiki, intriguing and difficult to classify.  And about The Hobbit, with the narrator’s journey.

Murakami is a master, or I should say, THE master when it comes to illustrate / picture the thin border between reality and unreality. This was really neat to have this theme presented here in conjunction with the world of art. Actually a very appropriate pairing.

I could go on rambling for ever. But just like one of the paintings in the book, I think this review is telling me it’s done, I shouldn’t add anything to it. The  only way to give it a worthy completion is for YOU to now go and read the book!

VERDICT: A stunning homage to artistic creativity, at the edge of real and unreal. Now my favorite novel by Murakami! Will he finally be one of the 2 Nobel Prize in literature winners in 2019?

HAVE YOU READ THIS BOOK?
What’s your favorite book by Murakami?
SHARE YOUR THOUGHTS  IN A COMMENT PLEASE