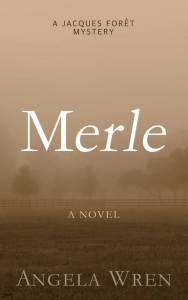 So glad to present to you another investigation for Jacques Forêt, after having introduced him to you last year in Messandrierre. Merle is the name of a fictional suburb of Mende, though Merle is a very local name as well in Cévennes region.

The book opens with Magistrate Pelletier at the scene of a suicide or murder.

The chapters alternate between the day following that discovery and the days leading to the events of that day.
Pelletier is helped in his investigation by detective Jacques Forêt.

Jacques was also asked to investigate a financial situation at the Vaux company: it looks like someone is leaking information to competitors, and so the company is losing many contracts and money. Plus, one of their staff member seems to be missing.

On top of it all, Jacques is helping local policeman Clergue finishing up an investigation on the disappearance of De Silva, a farm hand (cf. book 1 in the series).

So Jacques has a lot going on at the same time, including threats for apparently getting too close. This makes for a lot of suspense for the reader, and we constantly wonder if all these things are connected.

If it were not enough, Jacques is wondering if Beth (a photographer he got to like in the first book, and who is back from England) will make the leap and decide to stay with him in this quaint little French city.

I really enjoyed the suspense with the different plots.
Data pile up each time Jacques interviews people of concern.
And in the end, Jacques and Pelletier gather everyone, à la Poirot, and explain who did what and why.

I found the Vaux dealings a bit complex for me, but I liked the way Jacques was dealing with everything. Plus the French setting is definitely a treat. And the last lines promise a nice new chapter in Jacques’s life.

VERDICT:  Suspenseful and intriguing events in a picturesque corner of France.

Jacques Forêt, a former gendarme turned investigator, delves into the murky world of commercial sabotage – a place where people lie and misrepresent, and where information is traded and used as a threat.
The Vaux organisation is losing contracts and money, and Jacques is asked to undertake an internal investigation. As he works through the complexity of all the evidence, he finds more than he bargained for, and his own life is threatened.
When a body of a woman is found, it appears to be suicide. But as the investigation takes another turn, Jacques suspects there is more to it.
Who is behind it all…and why? Will Jacques find the answer before another person ends up dead?

Angela Wren
I’m an actor and director at a small theatre
a few miles from where I live in Yorkshire in the UK.
I did work as a project and business change manager
– very pressured and very demanding –
but I managed to escape and now I write books.
I’ve always loved stories and story telling
so it seemed a natural progression, to me, to try my hand at writing.
My first published story was in an anthology,
which was put together by the magazine ‘Ireland’s Own’ and published in 2011.
I particularly enjoy the challenge of plotting and planning different genres of work.
My short stories vary between contemporary romance, memoir, mystery and historical.
I also write comic flash-fiction
and have drafted two one-act plays that have been recorded for local radio.
My full-length stories are set in France where I like to spend as much time as possible each year.

Buy the book on Amazon

Global giveaway open to all
5 winners

CLICK ON THE BANNER TO READ REVIEWS,
EXCERPTS, AND INTERVIEW 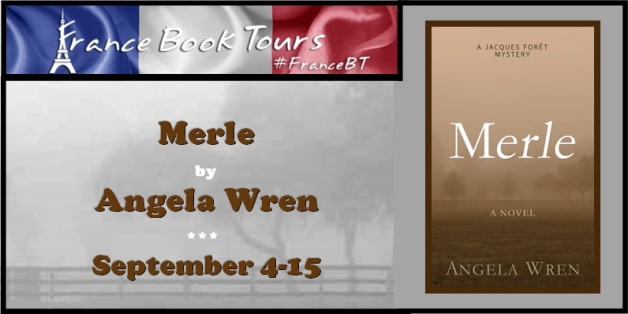