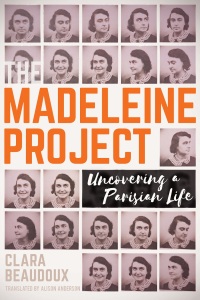 This is certainly the most unique book I have ever read, unique in premises and format. These qualities combined with the beauty of its content put The Madeleine Project among my favorite books read so far this year.
New Vessel Press has definitely the knack for publishing great books!

When Clara purchased an apartment in Paris, she discovered that the previous inhabitant had not emptied the cellar storage that went with it. The only person connected to that person showing no interest in the content of the cellar, Clara went in.
She discovered lots of cardboard boxes and luggage that had belonged to Madeleine, born in 1915. She had lived in this apartment for 20 years and died a year before Clara purchased the place.

Clara decided to make an inventory over Twitter #MadeleineProject.
This book is actually the collection and adaptation of that hashtag, with pictures and tweets.
She posted daily and presented her discoveries like a mystery with suspense, trying also to identify people on pictures, and ultimately to get to know Madeleine.

This book touched me deeply. Reflecting on my experience, I think the reason is that The Madeleine Project highlights the bridge that literature can build between people. There’s a lot of interaction in the book:

In the middle of the book is a fascinating interlude. As Clara was questioning herself about how to find the right balance between sharing someone’s life and respecting her privacy, a major event happened in Paris. It actually confirmed Clara in the need to offer beauty and life, and to create ties between people.

This was a wonderful view of how History and stories connect. Incidentally, we only have one word in French to speak about History and story (histoire). The Madeleine-Clara encounter is definitely the evidence that both are one.

As you read the book, you start seeing a real community between Madeleine, Clara, her neighbors, and her Twitter followers. And as a reader, you are invited in. Isn’t it what all books should be about?

VERDICT: Beautiful hymn to life and to literature as community building. In a unique format and great respect, Madeleine’s story is revealed to you. Very moving.

A young woman moves into a Paris apartment and discovers a storage room filled with the belongings of the previous owner, a certain Madeleine who died in her late nineties, and whose treasured possessions nobody seems to want. In an audacious act of journalism driven by personal curiosity and humane tenderness, Clara Beaudoux embarks on The Madeleine Project, documenting what she finds on Twitter with text and photographs, introducing the world to an unsung 20th century figure. Along the way, she uncovers a Parisian life indelibly marked by European history. This is a graphic novel for the Twitter age, a true story that encapsulates one woman’s attempt to live a life of love and meaning together with a contemporary quest to prevent that existence from slipping into oblivion.
Through it all, The Madeleine Project movingly chronicles, and allows us to reconstruct, intimate memories of a bygone era.

Clara Beaudoux
is a Paris-based journalist for the France Info news network.
The Madeleine Project has been wildly popular in France.
You can follow her on Twitter at @Clarabdx

Buy the book: on Indiebound | on Amazon

Global giveaway open to all
5 winners

HAVE YOU READ THIS BOOK?
What would be the most original book you’ve read?
especially about originality in format
SHARE YOUR THOUGHTS IN A COMMENT PLEASE 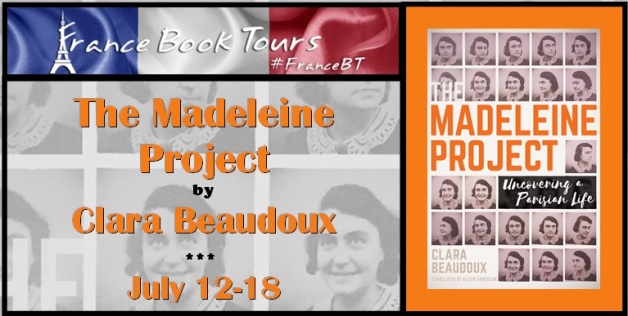 In full compliance with FTC Guidelines,
I received this ebook for free from the publisher in exchange for a fair and honest review.
I was in no way compensated for this post as a reviewer, and the thoughts are my own.

13 thoughts on “Book review and giveaway: The Madeleine Project”