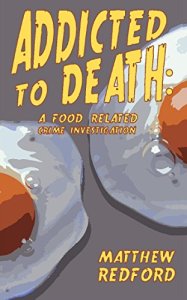 Following the murder of Benedict and Darcy Blacktail, two eggs savagely beaten to death outside their home by an unknown, fedora wearing assailant brandishing a large metal spoon, Detective Inspector Willie Wortel, carrot and the leading food detective in the police force, is called in to investigate. When the only food sapiens minister in the Government, Professor Perry Partridge, is murdered at the Strawberry Strip Club, run by the young damson Victoria Plum, DI Wortel suspects that the two cases may somehow be linked. As the Head of the Food Related Crime Division, DI Wortel is ably assisted by his human colleague Sergeant Dorothy Knox. But as their investigation begins, four celebrity chefs are sent death threats. It’s a recipe for disaster as the incarcerated evil genius MadCow McBeef is seeking parole; someone appears to have crumbled Mr Bramley’s apples; and there is an anti-GM food protestor on the prowl. And why do Oranges and Lemons think they owe someone five farthings? DI Wortel and his team must find out who is seemingly addicted to death. It will take all efforts – human, fruit and vegetable – to figure this one out.
Purchase from Amazon UK – https://www.amazon.co.uk/Addicted-Death-Related-Crime-Investigation-ebook/dp/B010545FEQ/ref=sr_1_1?s=digital-text&ie=UTF8&qid=1490869221&sr=1-1&keywords=matthew+redford

Born in 1980, Matthew Redford grew up with his parents and elder brother on a council

estate in Bermondsey, south-east London. He now lives in Longfield, Kent, takes masochistic pleasure in watching his favourite football team snatch defeat from the jaws of victory, is a keen chess player and is planning future food related crime novels. To counterbalance the quirkiness of his crime fiction Redford is an accountant. His unconventional debut crime thriller, Addicted to Death: A Food Related Crime Investigation was published by Clink Street Publishing last summer.

Firstly I would like to start by thanking for you providing me with this opportunity to write a guest blog for your site.

I’ve been asked to write about the first crime fiction authors I read, and I guess in many ways, the question is seeking to find out whether those authors influenced my writing in any way. I think this is a really interesting question because it not only provides me with the opportunity to think back on those authors who wrote books I enjoyed reading, but it allows me to reflect on what influence they actually had. And as someone who enjoys that reflectiveness, this topic was a delight.

I’m going to pick out three authors who I think are worth mentioning.

The first is Enid Blyton and her ‘Famous Five’ collection. And I recognise as the reader you can’t see this, but just typing the words ‘Famous Five’ has resulted in a big smile on my face for a number of reasons. The main reason being that they are just simply enjoyable, well written stories. They were among the first set of books I read, and importantly, which were read to me by my parents. I don’t think the importance of that latter point can be stressed enough; the importance of spending time with young children reading to them, reading with them.

Now you might be wondering if Enid Blyton is really a crime fiction author but her stories nearly always involved a wrong-doer being stopped. And while reflecting about the Enid Blyton books, the thing which sticks out about them now is their innocence. I like that. The stories flow. They move at a pace. There is a friendship to the group. But there is an underlying innocence. And ginger beer of course.

I guess that was something I wanted to try and capture with my writing. A childlike innocence while still letting the story pack a punch.

That leads me to the next author, Ian Harvey, who wrote the Resnick novels. I am not sure how many of you will be familiar with those books but he is certainly a million miles away from dear old Enid.

Resnick is a tough policeman who keeps order on the streets of Nottingham, while struggling to keep order in his home life. The alcohol flows, the jazz music plays, and the murders rack up. But he always gets his man. Gritty. Real. No punches pulled. And I love the books.

So how can someone like Ian Harvey have been an influence on my style of writing which has affectionately been called ‘quirky’ and ‘bonkers’. Well actually, it was a great influence, because I knew I wanted to write a crime fiction book, but having read something so gritty and true to life as the Resnick novels, I knew I was not going to be able to create something of that style. My writing style is very different and these books helped my realise I needed to find my own voice.

Which leads me to my third author, who you may not immediately think of as a crime fiction author. So let me set the scene and argue my case for this author who I will name in a few moments. Perhaps you can try and guess who it is?

Here is the premises of the story. A young boy is orphaned and forced to live with his two aunts who effectively force him into child labour. They eat him, he lives in squalid conditions and he hardly fed. This is clearly a crime. The young boy is eventually rescued and escapes these awful conditions.

Have you worked it out yet?

It’s of course Roald Dahl and the book is James and the Giant Peach, one of the great crime fiction novels. Okay, so perhaps I am stretching a point but the fact is that there was a crime in the book and the bad guys get their comeuppance in the end.

Clearly Roald Dahl had a massive influence on my writing. He demonstrated that anything is possible and any situation believable.

Which is why I hope you may take some time to read about Food Sapiens, those walking, talking, tax-paying food items who live amongst us. Follow the shenanigans of Detective Inspector Willie Wortel, a carrot, as he leads his team against food related crimes. Check out Addicted to Death or a Christmas cracker, Who Killed the Mince Spy?

AND YOU MY READERS,
WHO WAS THE FIRST CRIME FICTION AUTHOR
YOU READ?

2 thoughts on “Spotlight and guest-post: Addicted to Death”