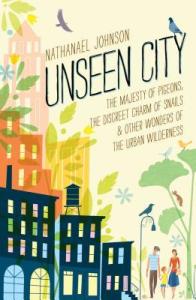 Unseen City:
The Majesty of Pigeons,
the Discreet Charm
of Snails
& Other Wonders
of the Urban Wilderness

In San Francisco, a young father started to pay more attention to his surroundings as his toddler kept asking him names of trees and the like. He was also led to research more about all he could see around him related to the fauna and flora and he shared his discoveries in this fantastic book Unseen City. Note the awesome subtitle and cover as well!

This book is indeed fascinating in its style and contents. It is written in a very lively and often very funny tone, even hilarious at times, while making the reader discover all kinds of interesting facts on creatures and trees found in the city. 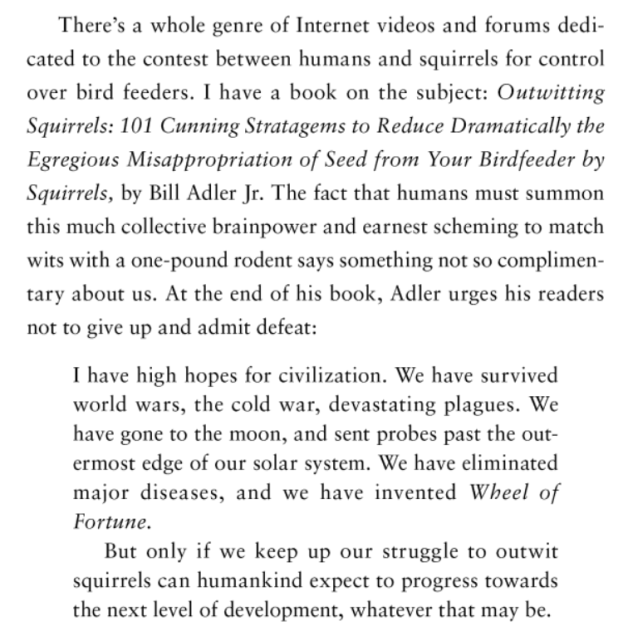 The idea behind the book is quite refreshing as well. The author debunks the rather romantic idea of nature being present only miles away from the city. On the contrary, Johnson is making the point, through numerous daily examples accessible to any city or suburban dweller, that a lot of nature is actually available in the most urban environment. He even proves that we find a greater bird diversity in large city parks than in some rural areas.

Instead of glorifying some distant and mythologized version of nature, I argue for the magic of the real.
p.200

Instead of glorifying only untouched wilderness, we night build an environmental ethic that allows humans a nature to live together.
p.199

And the other main point of the book is that knowing nature around us helps us get a better sense of place, hence of peace within ourselves and with others.

What’s true of other people is also true of places: to know deeply is to love more. To know the secrets of a place, to read it on many levels, and to sense the vastness of the unknown is, I think, the key to love.
p.77

Human self-awareness allows us to question our purpose. But that self-awareness also allows us to watch ourselves experiencing wonder, curiosity, and the delight of discovery, and therefore to value those things. Our role may be fulfilled, perhaps, simply by paying close attention. Maybe that’s the meaning.
p.195

You can thus develop a more healthy relationship with your environment, respecting it, but also learning to live interdependently with it – yes, there’s a lot you can even forage for your food, if you learn to recognize edible weeds on sidewalks!

The places where people live, if thoughtfully designed, might also be places for the rest of creation to thrive.
p.173

Here are the topics looked at in the book:
pigeons, weed, squirrel, bird language (and how urban noises disrupt birds), ginkgo, turkey vulture, ant, crow, and snail.
There are also lots references to other books that do sound excellent.

As an avid birder, both in rural areas as well as in my suburban backyard, and a lover of nature in all its shapes, this book was fascinating from the very first line to the end.

VERDICT:  THE book to read by all nature lovers and city dwellers. Also a great example of edutainment.

HAVE YOU READ THIS BOOK?
Any other recommendation
about nature in the city?
SHARE YOUR THOUGHTS IN A COMMENT PLEASE