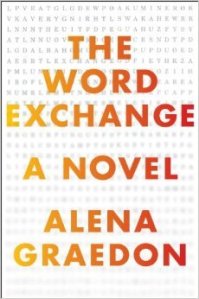 A few years ago, I requested The Word Exchange on Netgalley, because the story line sounded totally my cup of tea, and then, more urgent books piled up, and only recently did I finally take time to read it.

The structure of the book is neat, with its 3 parts: Thesis, Antithesis, and Synthesis.
Plus each chapter is alphabetized (like in Defining the World: The Extraordinary Story of Dr Johnson’s Dictionary, by Henry Hitchings, referred to in this novel itself) and opens with a made up definition of a word starting by that letter, in connection with the plot.

The story is simple:
Alice’s father, Doug, is the chief editor of the North American Dictionary of the English language. He disappears mysteriously, while preparing the third edition. Alice has no idea where he is, and she basically spends the whole book (a bit over three months) trying to find out what happened to him and where he could possibly be, if he is still alive even.
To do so, she tries to get help, but she has no idea whom she can really trust or not, including her former and current boyfriends.
The mystery is presented like a treasure hunt, with a secret code our heroine  has to crack.

Things get more and more complicated. Alice is actually a code name inspired by Lewis Carroll. Her real name is Ana.
And shortly after Doug’s disappearance, virus S0111 appears. A nasty and unusual thing that first mimics flu-like symptoms, but that actually attacks the language. It is spread by a meme, an electronic assistant (sometimes inserted in bodies as a microchip).
It attenuates the memory, progressively prevents you from talking, then ends up killing you.
The virus does not seem unrelated to the development of the Word Exchange and Synchronic, a company allowing you to redefine words as you wish, but also making you pay to use words.

Alice will have to face dangerous people. It gets even worse as the virus becomes epidemic, affecting neuronal pathways, killing thousands of people, and threatening the infrastructure all over the world. Language is in danger of becoming extinct and society is on the verge of collapse.
Some scenes are quite spooky, worthy of Fahrenheit 451.
Ana will even discover a secret society. But on which side are they?

The book is super geeky and starts from a very smart idea I think.
There are also cool descriptions of libraries.
But it is long, way too long and overly detailed. There are too many long digressions disrupting the pace of the novel, though interesting sometimes (on Hegel for instance).
Plus, as some of the main characters get affected by the virus, their journal contains progressively more and more typos and mistakes, and create many new words. The idea is neat, but in some passages, it is taken so far that really I had no idea what they were really saying. But maybe the point was that they were no longer even trying to communicate.
With less pages and more editing, this book could be really superb.

I enjoyed the ultimate message on the dangers threatening our society if we become slaves, overly dependent on technological devices to communicate.
There are some neat ideas, such as reading presented like a therapy and a preventive against the virus.

I found that reading gave me a certain relief – one form of escapism that seemed safe, and maybe more than safe. I felt saner – less fragmented- after reading for an hour.
location 3234

The passage on measures to take after the recovery, as a preventive against another similar crisis, could be used as the basis of any good education system. And we are certainly in need of those.

The secretary of education recently unveiled an initiative for curriculums to place more emphasis on history and language. Within the decade, proficiency in at least three languages will be required of all American schoolchildren by graduation. And along with its other recommendations, the CDC has issued a promulgation that every U.S. citizen “unplug” for at least two hours each day.
location 6374

VERDICT: A geeky novel focusing on the dangers of over extensive use of technological devices to communicate. Very smart but too long.

HAVE YOU READ THIS BOOK?
What other geeky novel about language
would you recommend?
SHARE YOUR THOUGHTS IN A COMMENT PLEASE

In full compliance with FTC Guidelines,
I received this ebook free of charge from the publisher, through Netgalley
I was in no way compensated for this post as a reviewer, and the thoughts are my own.