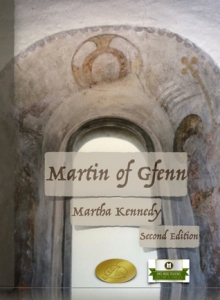 Learn more about it here: martinofgfenn.com

Last October, I received Martha Kennedy here for a guest-post on Swiss Literature. She then proposed me to read and review  Martin of Gfenn. As a medieval history buff, I had to say yes. And that was a great decision!

Young Martin was raised by the Augustinian Canons of St Martin, in Zurich, Switzerland. One day, at 10, he is caught drawing on a wall. The brothers punish him, but they recognize his artistic gift and ask for a teacher to come and train him properly. For three years, Brother Michele from Verona taught him drawing, painting, how to prepare walls for frescoes, and also how to make his own charcoal, colors, and tools.
However, a discovery puts a twist on his life as a monk painter: he contracts leprosy.
At the time, lepers were considered as outcasts and sent to live with other lepers. His frescoes of the church unfinished, Martin is chased away after a funeral Mass sung for him (!) and sent to the leper colony in the village of Gfenn.

How will Martin react to that? What will happen to him on his way to Gfenn? How will he wrestle with his own identity? Who is he? A monk, a leper, an artist? Will he ever find peace? What is the will of God in all this?

The author did a fantastic job at evoking the medieval mentality, especially at picturing the terrible situation it was for someone to contract leprosy back then, with the social and religious reaction, which led here in Martin to a crisis of identity as an artist and as a human being. His inner struggle, including denial, was fantastically portrayed, with the shame and guilt provoked by the society of the time.

As for the art, the descriptions of paintings and frescoes, with the Biblical connections, were very well done. The relationship between the artist and his work (for instance through nightmares) was an interesting element that helped as well to convey a setup of mind unfortunately lost since the Middle Ages, for the most past. And I loved how the author illustrated how art can provide hope.

Some religious developments were fascinating, such as the questions about one’s calling and God’s will; and also the difference between the pessimism of Saint Augustine (read at the leper colony) and Martin’s own positive experience of the world and its people.
The message of compassion was very inspiring as well.

I found the dialogs very lively. They really helped to get into the story and the characters.

About things that could be improved: the story was a bit slow to start, with possibly some unnecessary developments at the beginning.
Also, I thought there was too much insistence on carnal dreams. I know this was a major issue for monks in the Middle Ages, but still, I think this was mentioned too often.

VERDICT: Unique historical novel about an artist and leper in the Middle Ages, portraying his inner journey through guilt, shame, and acceptance, in search for God’s will.

Martin of Gfenn is a work of historical fiction telling the story of a 13th century artist who, at nineteen, contracts leprosy. He fights physical deterioration and social stigma to do what he believes he was meant to do – paint fresco. His short journey takes him from Augustine cloister where he grew up, to the streets of a rapidly growing Zurich to a hospital for lepers built by the Leper Knights of Jerusalem, the Knights of St. Lazarus, in the village of Gfenn. The story is inspiring; its philosophical focus is Christ’s teachings from the perspective of Martin whose leprosy, youth, passion for painting and education have conspired to make him an early day Christian humanist. 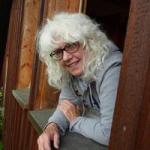 Award winning author, Martha Kennedy has published three works of historical fiction. Her first novel, Martin of Gfenn, which tells the story of a young fresco painter living in 13th century Zürich, was awarded the Editor’s Choice by the Historical Novel Society Indie Review and the BRAG Medallion from IndieBRAG in 2015.

Her second novel, Savior, also an BRAG Medallion Honoree (2016), tells the story of a young man in the 13th century who fights depression by going on Crusade. Her newest novel, The Brothers Path, a loose sequel to Savior, looks at the same family three hundred years later as they find their way through the Protestant Reformation.

Kennedy has also published many short-stories and articles in a variety of publications from the Denver Post to the Business Communications Quarterly.

For many years she lived in the San Diego area, most recently in Descanso, a small town in the Cuyamaca Mountains. She has recently returned to Colorado to live in Monte Vista in the San Luis Valley.

To learn more about Kennedy’s award-winning novels, Martin of Gfenn and Savior, check out her Amazon author page

HAVE YOU READ THIS BOOK?
Have you read any other novel with lepers?
SHARE YOUR THOUGHTS IN A COMMENT PLEASE

In full compliance with FTC Guidelines,
I received this book for free from the author.
I was in no way compensated for this post as a reviewer, and the thoughts are my own.