The book starts with a prologue in the first person narrative: on her eleventh birthday, Rose gets a bike as a gift. Loving nature and solitude, she tries it right away in the nearby forest. And something weird happens. Thus begins Sleeping Giants, it grabbed me right away!

Rose is found later, alive, at the bottom of a huge hole, the size of a house, with very shiny walls covered in intricate carvings. She’s actually lying on something that looks like a giant metal hand.

Then the rest of the book is mostly done with investigation files, in the form of questions and answers.
Right after the accident, the area was cordoned by authorities and Rose was invited to forget about the whole thing. But seventeen years later, Rose is a trained physicist, and with her team, she still wants to try to figure out what really happened to her that night.

I was first surprised by the unusual format of the book, but soon realized it really worked to build up the suspense, even if sometimes I had a hard time figuring out which was the interrogator and the interrogated. These Q&A sessions make the whole story very lively, as well as the relationships and tension that can exist between the different characters.

The book takes bigger and bigger proportions, and I can’t wait for volume 2 to really know what’s really going on there. Is this some type of huge human plot? Or a mega alien invasion preparation? For now, there’s already enough suspense to entertain you, as you gradually put together pieces of the puzzle with the scientists.

And who really is the interrogator, who is he working for?
I just hope we won’t have to wait until end of volume 3 of the trilogy to start getting answers.

A warning, if the book has been presented to you as comparable to The Martian, don’t fall for it, you would be disappointed. According to me, they are both quite good, but really, I don’t see the connection, neither in story, plot, nor writing style. Even the scientific details have absolutely nothing in common, both deal with two very different areas of science-fiction. And I’m glad they do, science-fiction is vast enough for all kinds of different sub-genres.

VERDICT: Very suspenseful science-fiction novel, with a unique writing style in the form of  Q&A. And it works beautifully!

A girl named Rose is riding her new bike near her home in Deadwood, South Dakota, when she falls through the earth. She wakes up at the bottom of a square hole, its walls glowing with intricate carvings. But the firemen who come to save her peer down upon something even stranger: a little girl in the palm of a giant metal hand.
Seventeen years later, the mystery of the bizarre artifact remains unsolved—its origins, architects, and purpose unknown. Its carbon dating defies belief; military reports are redacted; theories are floated, then rejected.
But some can never stop searching for answers.
Rose Franklin is now a highly trained physicist leading a top secret team to crack the hand’s code. And along with her colleagues, she is being interviewed by a nameless interrogator whose power and purview are as enigmatic as the provenance of the relic. What’s clear is that Rose and her compatriots are on the edge of unraveling history’s most perplexing discovery—and figuring out what it portends for humanity. But once the pieces of the puzzle are in place, will the result prove to be an instrument of lasting peace or a weapon of mass destruction? 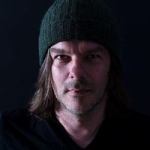 Sylvain Neuvel
dropped out of high school at age 15.
Along the way, he has been a journalist,
worked in soil decontamination, sold ice cream in California,
and peddled furniture across Canada.
He received a Ph.D. in linguistics
from the University of Chicago.
He taught linguistics in India,
and worked as a software engineer in Montreal.
He is also a certified translator, though he wishes he were an astronaut.
He likes to tinker, dabbles in robotics and is somewhat obsessed with Halloween.
He absolutely loves toys; his girlfriend would have him believe that he has too many,
so he writes about aliens and giant robots as a blatant excuse to build action figures (for his son, of course).

HAVE YOU READ THIS BOOK?
What’s your favorite science-fiction novel?
SHARE YOUR THOUGHTS  IN A COMMENT PLEASE

I checked out this book at my public library.