Errors of Evaluation
by
Paola Pica 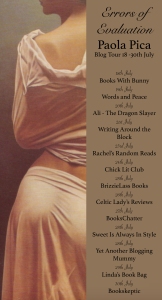 Francesca’s presence pervades the lives of everyone she meets. From the therapist – an ambiguous and even more unscrupulous person than herself – to the husband who, after twenty years of marriage, is left financially ruined and suicidal; and her own cousin, who despite tirelessly attempting to help her in a time of need, has been left betrayed on two separate occasions a decade apart. Three very different characters tell their story about the inscrutable woman who has entered their lives, each one offering their own point of view on who the beautiful Francesca really is. Each has made an error of evaluation which they now realise has prejudiced their lives and their relationships. An omniscient narrator will have the final say.

As I have already said, even if I have been writing all my life, I only decided to become a writer, in the literal meaning of the word, a little more than ten years ago.  What do I mean by “literal meaning”?  Simply that a person who likes writing is not a writer until people  start reading the things that she/he writes.  Until that moment, they are “people who write” and not “writers”.  My turning point in all this process was the terrible accident I went through and that stuck me home for more than three months.  At that point I had plenty of time to spend writing and phoning to Publishers, sending them or having my manuscripts (amazing how we still use this word for the computer written drafts we send them) refused.

My drawers were full of all I had been writing since I was a girl of fourteen or fifteen and used to keep a diary.  I remember that I used to write it in English, because I was the only one in the family who knew that language while all the others had studied and practiced French.  That was the time of my first love stories (more or less platonic) and my mother was very curious about my life, due to the fact that I had always been very quiet about what happened at school or when I was with my friends.  Quite the reverse with my brothers and sisters, who were much more talkative than me.  I remember myself at the seaside with my family, when I was thirteen, reading the letters from some of my friends in the shower on the beach, so that I could tell my mother that they had been destroyed by the running water.  They were very innocent letters but my mother was very intrusive; which I didn’t like at all.  Those were different times from now and letters were still exchanged:  no mobile phones and no email and even parents seemed to worry more, probably too much, about  their children’s lives.  And that was not very long ago.  Italy has probably prolonged a little more than anywhere else the authoritative position of parents.

When I think of my books and of the inspiration I had for each of them, I can’t help  linking part of the facts I create with my personal experience, even if none of them is autobiographic.  In ERRORS OF EVALUATION, for example, Francesca’s having to rely on her sister’s complicity for going on a motorbike ride with Massimo, comes straight from my girlhood, when my mother wanted us to be under strict control.

Or when I look back to where the inspiration came to me from, regarding the “Respectable Man”’s worrying about his son’s not wanting to go ahead with his grandfather and father’s professions.  All that, even if not autobiographic again, came to me from the class clashes that still exist in Italy and through which Italians still have to go on several occasions in their lives.

I enjoy putting on the page the real life, digging in which I find deeper and more superficial layers of history and traditions, which are the basis of our culture.  And, speaking of culture, I am particularly happy at having been given an opportunity for experiencing different cultures and, as a consequence, different lifestyles in different countries.  I’m thinking of England above all, because it was a great part of my education and life; but there is something else that I find very useful for my creativeness, that is, the many contacts with foreigners that I daily  have from my job.  When I spend, say, one hour or more speaking with them about their lifestyles and countries so far from mine (I do it repeatedly), all the “material” they contribute to the conversation is a gift to me.  It enriches the knowledge I have of mankind, because they tell me about  their points of view on topics that are usually universal but differently focused on by each of them, according to their different cultures.

Nevertheless, having said all that, I must also say that the environment I feel more at ease in is and will always be the Italian one, with all its varieties and, sometimes, contradictions.  In fact, according to our general culture and their individual upbringings, Italians can be Elenas or Francescas, Marcos or Massimos; and only an omniscient narrator, like the one in the fourth chapter in my ERRORS will be able to unify the various points of view and kinds of behavior.

From the 2° chapter:  Massimo, Francesca’s husband, who has been introduced to the Reader by Marco, the “Shrink”, in the first chapter, opens this chapter speaking about himself

I turned sixty not long ago and I am paying for the biggest mistake of my life, made more than thirty years ago and which I tried to fix by taking my own life — this absurd life that does not belong to me, which is no longer the golden existence into which I was born and raised.

I am in a hospital bed in the private clinic where my brother wanted me placed, he himself shouldering all the expenses. I wouldn’t have been able to oppose this even had I wanted to, because I was unconscious and in grave danger of dying, having shot myself in the heart with a .22 caliber gun. Or, at least, that’s what I thought I had done.

Two wrongs do not make a right: you can’t fix one mistake by making another even bigger one. I shouldn’t have missed the target.

I spend too much time thinking, now that they sedate me less after bringing me out of my medically-induced coma.

It’s probably the drugs, but my life has been passing before my eyes, this life of infamy.

It’s strange: when I realized that I was thinking as a person awake and that I was not dreaming, much less living ‘else- where’, after the dreaded tunnel, the first thought I had was that I should hide the gun with which I had hurt myself, con- vinced that it was next to me on the living-room floor of my house, and that it would be a good idea to make it disappear.

It was to lessen the enormous disgrace that I felt for not having succeeded, for still being alive, for having to suffer the shame of her having it her way again, that Bitch, and now she would be so sure that I had staged this scene for her so that she would come back to me. That would be a real curse, for sure.

The Reader has already been informed about Francesca’s husband, who has always wanted her because of her beauty and has succeeded in giving her the certainty that Beauty will open any doors in front of her.  “That must be the big mistake he is hinting at…”, I want my reader to be telling himself at this point.

2 thoughts on “Guest-post and excerpt: Errors of Evaluation by Paola Pica”