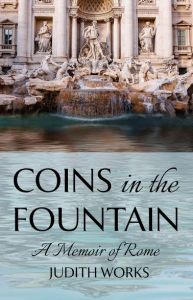 Innocents Abroad collide with La Dolce Vita when the author and her husband arrive in the ancient city of Rome fresh from the depths of Oregon. While the author endeavored to learn the folkways of the United Nations, her husband tangled with unfamiliar vegetables in a valiant effort to learn to cook Italian-style. In between, they attended weddings, enjoyed a close-up with the pope, tried their hands at grape harvesting, and savored country weekends where the ancient Etruscans still seemed to be lurking. Along the way they made many unforgettable friends including the countess with a butt-reducing machine and a count who served as a model for naked statues of horsemen in his youth.

But not everything was wine and wonders. Dogs in the doctor’s exam room, neighbors in the apartment in the middle of the night, an auto accident with the military police, a dangerous fall in the subway, too many interactions with an excitable landlord, snakes and unexploded bombs on a golf course, and a sinking sailboat, all added more seasoning to the spaghetti sauce of their life.

Their story begins with a month trying to sleep on a cold marble floor wondering why they came to Rome. It ends with a hopeful toss of coins in the Trevi Fountain to ensure their return to the Eternal City for visits. Ten years of pasta, vino, and the sweet life weren’t enough.

Part memoir, part travelogue, Coins in the Fountain will amuse and intrigue you with the stories of food, friends, and the adventures of a couple who ran away to join the circus (the Circus Maximus, that is).

Meet the author:
​
Life was routine until the author decided to get a law degree. Then a chance meeting led her to run away to the Circus (Maximus) – actually to the United Nations office next door – where she worked as an attorney in the HR department and entered the world of expat life in Rome.

Her publishing credits include a memoir about ten years in Italy titled Coins in the Fountain, a novel about expats in Rome, City of Illusions, and flash fiction in literary magazines. She continues to travel in her spare time, having fitted in over 100 countries. And when she is in Rome, she always tosses a coin in the Trevi Fountain to ensure another visit.

When I’m asked about the funniest thing that ever happened to me; or the scariest; or the strangest I always end up with an event that contained all three at once:

My husband and I were visiting friends in Dar-es-Salaam, Tanzania, where the wife worked for the United Nations World Food Programme and her husband did an excellent job of managing everything else. They’d planned several events but I’d always wanted to visit Zanzibar, the exotic island in the Indian Ocean a short flight from Dar. Our friends, accustomed to hopping about East Africa in tiny planes, booked the flights. (Think Out of Africa.)

We trekked out to the airport early on a steamy gray tropical morning to find a tiny four-passenger plane parked on the tarmac. No one was around and we stood in the damp waiting. Eventually the pilot showed up looking rather the worse for wear. His uncombed dyed-red hair with gray roots and carelessly buttoned wrinkled shirt didn’t look encouraging. He motioned us to climb in. One friend sat in the front seat, the other in the back; my husband and I in the middle two seats. The pilot slammed the passenger door shut, climbed into the pilot seat, began to fiddle with the controls, and when the gauges gave him the information he wanted we took off.

The skies cleared and we flew low over the Zanzibar channel. Great flight, I thought. That is until I realized the pilot had latched the door with my long silk skirt hanging halfway out. I couldn’t move unless I undressed. Worse, when I looked out the window I saw the bottom half of the skirt trailing in the wind. I was terrified I was going to be sucked out and spent the remainder of the flight thinking about life insurance and obituaries.

We landed and I retrieved my skirt, sure there hadn’t been any danger after all and I needn’t have been worried. Then my husband said, “I hope you didn’t notice the fuel leaking from the tank from my side of the plane.”

We took a commercial flight back to Dar. And I wore slacks.

Click on the banner below to read other guest-posts and interviews by the author!