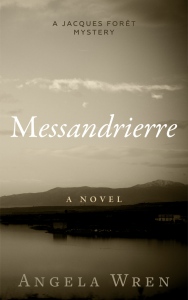 Visit the author’s website and her blog,
where you can read interviews of the main characters!

Connect with her on LinkedIn

Buy the book  on Amazon or on Smashwords

If you are familiar with this book blog, you know by now how I enjoy Louise Penny’s series on Armand Gamache. It happens that I have just finished listening to book six, and at the end of that audiobook, there was a wonderful interview with Louise where she speaks about the “village mystery” genre. Messandrierre is definitely a bit like Three Pines. See why after spending some time in Québec, I am thrilled to talk to you today about life in a small Cévennes village.

First, to give you an idea where the Cévennes region is:

Not unlike Armand Gamache, we meet police officer Jacques Forêt, after some crisis. Something happened while he was working in Paris, he was wounded, plus he recently lost his mother. So he is now down South in Les Cévennes, trying to recover, working in a much quieter environment, this small village of Messandrierre. You’ve got the usual stuff of disputes about  property lines (this is a must in small French villages, believe my own experience!), between farmers, and the occasional driver not renewing his car tax.

But when tourists start getting missing, things get not as rosy. And the villagers suddenly seem to have too many secrets for comfort (again, like the inhabitants of Three Pines). It does not make his investigation easy.
To complicate Jacques’s life, a former close relationship, Beth, comes back to the village without even informing him. She is nervous and seems also to hide too many things: wasn’t she the last person to talk to one of the tourists who disappeared? And what really happened to her husband who died recently? Could there be a face of Beth’s Jacques had not known about?

I really enjoyed the village setting, so well evoked, with its inhabitants and relationships. There’s a superb passage on whispers and rumors in the village that perfectly illustrates that. And you have got the inevitable café, the hub of the place. The Fête de la Saint Jean reminded me of many wonderful parties, and village dancing.
There are occasionally some nice glimpses, thanks to Beth, a photographer:

The sun was in just the right aspect to harlequin the stone floor with colour and she captured the moment with half a dozen shots.

I could feel exactly what she felt, having witnessed something similar when I visited the Basilica of Saint-Denis. Though I never thought of the word “harlequin”, so appropriate: 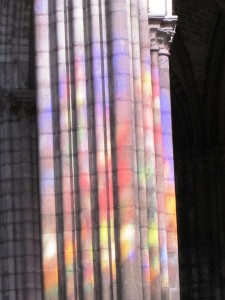 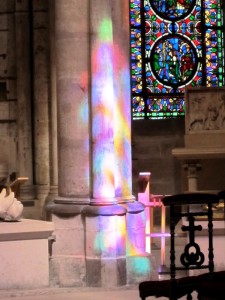 The plot gets more and more complex, also with several flashbacks to different periods. I wondered many times what on earth could be the connection between all the different scenes, but was happily rewarded at the end. Some elements though are easy to guess. As soon as Beth received a gift, I wanted to scream to Beth: No, don’t eat that!! She really should have listened to me, lol!
The ambiance sometimes gets really creepy à la Rebecca, with almost unbearable suspense, and you can only start suspecting everyone in this village!

The characters are well defined and alive. I could identify several to people I knew in my village! Even restless cows!!
Jacques is quite lovable. He is a gentle soul, though wounded. Again like Gamache, there are some issues going on with his boss.

This evening, I realized with fright that I had almost caught up with Louise Penny’s series! But now, I know I will have another village series to follow: yes, rejoice, book 2 is in the making! I can’t wait to meet Jacques again, as well as Beth and the villagers. I also want to know more about what’s going on with Fournier, Jacques’s boss, who seems fishy. Could he be an ally to criminals?

VERDICT: Life in a French village may not be what you think! Short crime mystery with well evoked setting and characters, and great suspense. Armand Gamache could easily be Jacques Forêt’s mentor!

Sacrificing his job in investigation following an incident in Paris, Jacques Forêt has only a matter of weeks to solve a series of mysterious disappearances as a Gendarme in the rural French village of Messandrierre. But, as the number of missing persons rises, his difficult and hectoring boss puts obstacles in his way. Steely and determined, Jacques won’t give up and, when a new Investigating Magistrate is appointed, he becomes the go-to local policeman for all the work on the case. Will he find the perpetrators before his lover, Beth, becomes a victim? Messandrierre – the first in a new crime series featuring investigator, Jacques Forêt.

Angela Wren
Having followed a career
in Project and Business Change Management,
I now work as an Actor and Director at a local theatre.
I’ve been writing, in a serious way, for about 5 years.
My work in project management has always involved drafting,
so writing, in its various forms,
has been a significant feature throughout my adult life.
I particularly enjoy the challenge of plotting
and planning different genres of work.
My short stories vary between contemporary romance, memoir,
mystery and historical.
I also write comic flash-fiction and have drafted two one-act plays
that have been recorded for local radio.
The majority of my stories are set in France
where I like to spend as much time as possible each year.

Visit the author’s website and her blog,
where you can read interviews of the main characters!

Connect with her on LinkedIn

Global giveaway open internationally:
5 participants will each win a copy of this book:
print or digital for Europe residents
digital otherwise

19 thoughts on “Book review and giveaway: Messandrierre – I love France 182”