Buy the book | on Indiebound | Amazon | on Barnes & Noble

I first discovered the Alsace region during a grade school trip back in the 1970s, then went back twenty years later and fell again under its charm. So there was no way I was going to skip Late Harvest Havoc as it is set there, and it was delightful to follow the characters in that really neat area.

First, take time to appreciate the ambiguous cover. What is really coming out of that tonneau? Know that the French title of the series translates literary as “the blood of the vine”. This is particularly relevant for this specific mystery, as you will see later.
Wine connoisseur and detective Benjamin is to meet a businessman in Germany, so he decides to stop in Alsace on his way, with his assistant Virgile.

As soon as they get there, Benjamin goes to visit the marvelous cathedral of Strasbourg, unique with its pink stone. The exterior color evolves as the light changes during the day, and it is a gem. Here are a few of my pictures (all the pictures here below are mine)

The inside of the cathedral has different periods, some parts going back to the 8th century.
There are a few unique pieces in it, and that’s how the mystery begins, with Benjamin admiring the Astronomical Clock as well as the nearby Pillar of Angels. The description and history are included in the narrative thanks to a local tourist guide Benjamin is listening to. 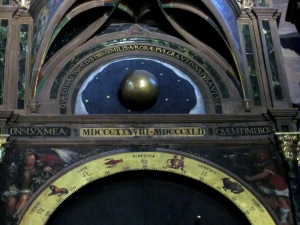 In the clock, an apostle comes out at every hour, but the crowds gather at half past noon to see the procession of the 18 inch high figures of Christ blessing all his Apostles, while the life-size cock crows thrice. The first clock was built in the 14th century. The current one dates from 1843. It is an amazing work of art, with many details. 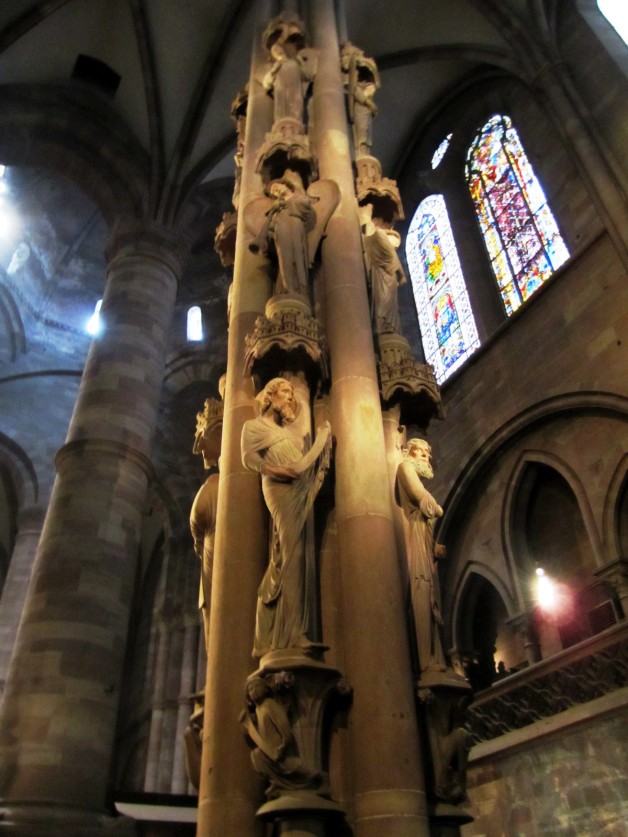 But shortly after, Benjamin sees the guide fall to her death in a strange way. Who is she? Was it an accident or did someone kill her?
As Benjamin and Virgile visit other quaint Alsace cities, Colmar being one of these beauties, they hear about another strange happening: vines are being cut down with a chainsaw! And they multiply all over the area. Imagine: a serial killer attacking not people but vineyards, with a powerful weapon, and with no apparent connection between the places attacked.
To top it all, Benjamin discovers soon after that someone slashed the back tires of his car!

What’s going on here?
Now, I pasted the map of France, so you could see how close Alsace is to Germany. The border is the river Rhine itself. The two countries are so close there that the region has been back and forth French and German during different periods in history. It has a unique culture and even a unique local type of dialect.
France-Germany, that sends us back for instance to World War Two. Could all these happenings be related to old revenge (the book opens precisely with a quotation by Balzac on revenge!), about dealings during WWII? about the Resistance? And how are these connected with the death of the tourist guide?
Grudges can go on for generations, and resentment is not uncommon in rural areas.

Much could be hidden at the bottom of the glass. One had to drink to the dregs.
Chap. 3

The relationship between Benjamin and his young assistant has evolved along the series. This time, Benjamin does not hesitate to go alone to his business meeting in Germany. He leaves Virgile by himself to do some precious groundwork to try to solve this mystery and prevent the killer from destroying more vineyards.
Benjamin is indeed changing, getting older, physically more fragile (and this is closely tied to the plot), whereas Virgile is still into nightclubs… So tension is not always absent between them.

If you have ever tasted some Rieslings or other wines of the region, you will be appalled that someone would destroy so many vineyards. If you have not, I’m sure you will want to  after having read this short mystery. These wines have a particular taste, partly due to the fact that the grape harvest sometimes does not happen until Christmas in that region, so a few months later than for most of French wines – hence the book title, though the word late can also point to the theme of revenge.
And be prepared for the amazing scenes of wine and food pairing, for instance in chapter 4! Never read a book of this series when hungry, you could turn dangerous yourself!
Talking about food, this dialogue between Virgile and Benjamin totally cracked me up:

“No, thank you very much. I won’t be having any cheese,” Virgile said politely.
“My boy, there is something lacking in your upbringing that would almost justify a lawsuit against your parents,” Benjamin joked with a mouth full.
Chap. 6

Indeed, never skip the cheese (salad-cheese-desert is the only worthy end of your meal), even if it’s a Munster, a very strong but delicious cheese from this Alsace region.
Speaking about Strasbourg and Alsace, the authors HAD to mention the delicious tartes flambées, with a super thin crust, often prepared in the street in simple ovens. 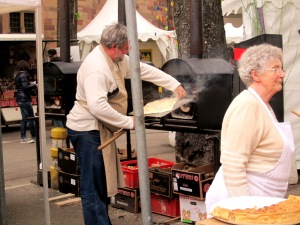 With the wonderful description of the region (I didn’t talk about the geography and the Grand Ballon d’Alsace), its food and wine, I really enjoyed this book, its plot and its complex and evolving characters. In fact, I believe this is so far my favorite in that series, with its strong sense of unity between the crime and the region. It starts in a very dramatic way, and there’s a neat inclusion as well, as the book ends with an Epilogue in the cathedral again.
There’s also, inevitably, a rather inadequate French police officer!

VERDICT: Appealing mystery for all your senses, with a strong sense of unity between plot and place. A very enjoyable way of discovering a unique region of France.

Vineyard revenge.
Winter is in the air in Alsace and local customs are sowing trouble, piquing the curiosity of the famous winemaker from Bordeaux, Benjamin Cooker. While the wine expert and his assistant Virgile settle into their hotel in the old city of Colmar, distinguished vineyards are attacked. Is it revenge?
The plot thickens when estates with no apparent connection to one another suffer the same sabotage just days prior to the late harvest. All of Alsace is in turmoil, plunged in the grip of suspicion that traces its roots back to the darkest hours of the German occupation. As he crosses back and forth into Germany from the Alsace he thought he knew so well, Cooker discovers a land of superstition, rivalry, and jealousy. Between tastings of the celebrated wines, he is drawn into the lives and intrigues of the inhabitants.

Jean-Pierre Alaux and Noël Balen,
wine lover and music lover respectively,
came up with the idea for the
Winemaker Detective series
while sharing a meal,
with a bottle of Château Gaudou 1996,
a red wine from Cahors
with smooth tannins and a balanced nose.

Sally Pane studied French at State University of New York Oswego and the Sorbonne before receiving her Masters Degree in French Literature from the University of Colorado where she wrote Camus and the Americas: A Thematic Analysis of Three Works Based on His Journaux de Voyage. Her career includes more than twenty years of translating and teaching French and Italian at Berlitz and at University of Colorado Boulder. She has worked in scientific, legal and literary translation; her literary translations include Operatic Arias; Singers Edition, and Reality and the Untheorizable by Clément Rosset, along with a number of titles in the Winemaker Detective series. She also served as the interpreter for the government cabinet of Rwanda and translated for Dian Fossey’s Digit Fund. In addition to her passion for French, she has studied Italian at Colorado University, in Rome and in Siena. She lives in Boulder, Colorado with her husband.

Global giveaway open internationally:
5 participants will each win a copy of this book.
Print/digital format for US residents
Digital for all other residents

HAVE YOU READ THIS BOOK?
What do you think about this book cover?
SHARE YOUR THOUGHTS  IN A COMMENT PLEASE

This book counted for 2015 Reading Challenges