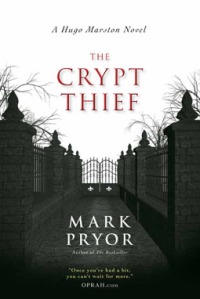 In August, I presented to you the first book in the Hugo Marston series: The Bookseller. This time, the former FBI agent has to do with a very particular type of killer. The Crypt Thief has all the elements of a chilling thriller.

The book opens with a spooky scene, worthy of the whole novel: a man, preparing to steal from graves at famous Père Lachaise cemetery in Paris (see my own pictures of this remarkable city within the city!), is interrupted by two tourists. He kills them and puts a little statue on the chest of the woman.
Hugo (security chief at the US embassy in Paris) is called on the case, as the victims were American. Actually, the man was none other than the son of American senator Holmes. And they soon discover that the woman was actually from the Middle East maybe. She was actually traveling under a fake passport and in the company of a man present on several terrorist watch lists!
So what in the first place were these two tourists? terrorists? doing in the middle of the night in the cemetery? and why were they killed? Also, the killer leaved no trace and his way of going in and out of the cemetery seems quite mysterious.
Things get even more complicated as victims multiply, apparently the work of the same man. Why would a man target mostly dead people? What’s the connection between all these bodies?

The book is packed with suspenseful scenes, even though the reader can figure out rather quickly the red-herrings.

It has the benefit of putting together in the same novel several major Paris landmarks, such as two famous cemeteries, the catacombs, and Le moulin rouge. There are also scenes in a quaint village in Les Pyrénées.
Like in the first novel in the series, there are some neat descriptions of Paris neighborhoods, for instance the following passages:

The characters are very well defined and fun to be with, well, maybe not so much the grave robber…
But as a whole, I think I preferred The Bookseller, which contained a more original plot I think. Also, as the book moved along, I felt there were maybe too many unnecessary murders. Still, it’s a great read with its share of macabre and gruesome, perfect if you enjoy experience a great chill in a Paris setting!

It’s summer in Paris and two tourists have been killed in Père Lachaise cemetery in front of Jim Morrison’s grave. One of the dead tourists is American and the other a woman linked to a known terrorist; so the US ambassador sends his best man and the embassy’s head of security–Hugo Marston–to help the French police with their investigation. At first, Hugo is stumped. How does this killer operate unseen? And why is he stealing the bones of once-famous can-can girls?

Hugo cracks the secrets of the graveyard, but soon realizes that old bones aren’t all this serial killer wants: his ultimate plan requires the flesh and organs of the living. And when the crypt thief spots the former FBI agent on his tail, he decides that Hugo’s body will do just fine.

Mark Pryor (Austin, TX)
is the author of The Bookseller,
the first Hugo Marston novel,
and the true-crime book As She Lay Sleeping.
A former newspaper reporter from England
and now an assistant district attorney
with the Travis County District Attorney’s Office,
in Austin, Texas,
he is the creator of the true-crime blog DAConfidential.
He has appeared on CBS News’s 48 Hours
and Discovery Channel’s Discovery ID: Cold Blood.

This book counts for
the following Reading Challenges

HAVE YOU READ THIS BOOK YET?
What other good mystery set in cemeteries have you read?
SHARE YOUR THOUGHTS  IN A COMMENT PLEASE