This year I decided to finish 2014 by reading 3 mysteries related to Christmas, and I managed to do so. It was a very enjoyable experience that I will definitely try again next year.

So I just read: 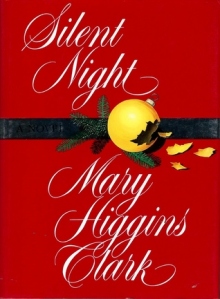 I had not read a Hercule Poirot for a while, so that was a treat.
There were some points common to And Then There Were None, which is one of my favorites by Agatha Christie.
Simeon Lee has asked his four sons and their wives to come home for Christmas. But the old man is found lying in a pool of blood on Christmas Eve, in a locked room. Suicide? Murder? The suspects who seem to have the strongest motives have good alibi…

The Sittaford Mystery, by Agatha Christie

To spend an enjoyable evening during a dreadfully cold winter night with a snow storm in Devon, 6 people decide to have fun with a game of séance. But the fun turns sour when the spirit tells them the name of a man who was just murdered. Was he? Is it just a silly joke or really true? Who would have wanted to murder such a nice man? Emily Trefusis is working really hard to figure this one out.

This is finally my very first book by Mary Higgins Clark, and I really enjoyed it a lot!
“When her husband is diagnosed with leukemia, Catherine Dornan and their two young sons accompany him to New York, during the Christmas season, for a life-saving operation. Hoping to divert them from worry about their father, Catherine takes the boys to see some of the city’s Christmas Eve sights. When they stop to listen to a street musician, Brian, the younger boy, sees a woman find his mother’s wallet, which also holds a precious family memento he believes will save his father’s life. Unable to get his mother’s attention, Brian follows the woman into the city’s subways — beginning a journey that will threaten his life and change that of his mother and of the woman as well.” [Goodreads]
The family memento mentioned here is a St Christopher medal.
There was lots of suspense, on the background of real Christmas themes –I mean with Christian values. Very enjoyable!

That’s it for the Christmas spirit reading challenge, but I would like to add a few words here of 2 other mysteries I listened to this year: 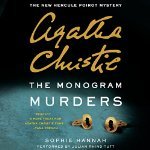 This is also my very first book by Louise Penny, and I definitely want to read the other books in the series.
I enjoyed the main hero, Chief Inspector Armand Gamache, and the inhabitants of Three Pines, in rural Québec. They think Jane must have been the victim of a hunting accident, but Gamache is not convinced.
Gamache is a very kind man, very thoughtful. I really liked his relationships with the other characters and his way of leading his inquiry.
I also enjoyed a lot the descriptions of the setting, a small village.

The narrator Ralph Cosham was excellent. He had a peaceful pace perfect for the story, starting slow, as Penny sets up the characters and place of her series. But he added the necessary tension and eagerness for the more suspenseful episodes. I’m glad he narrates the other books in the series.

The Monogram Murders, by Sophie Hannah

I was fortunate enough to find this audiobook available at my public library.
I only read a few books with Hercule Poirot, but I was intrigued knowing that this author had finally received the official permission to write new episodes with him.
Not knowing thoroughly enough Poirot’s character, I can’t tell if she did a great job at recreating him, but I really enjoyed the plot. As in several other books by Agatha Christie I have read, it ends up being much more complex than what it looks at first sight. And you may well figure out who did it, but could you really figure out why he/she/they did it? This is so smartly done!

The British milieu and characters seemed also very authentic to me.

The audiobook was an extremely enjoyable experience: bravo to the narrator Julian Rhind-Tutt.
He is really incredible at giving each character his/her own voice, special accents, mannerisms, for instance for the hotel manager.
His voice of Poirot is awesome, with great French accent. Hannah uses many French phrases and expressions, and I don’t think Julian makes a single mistake at pronouncing them, which is really unfortunately quite rare. It is really wonderful to find a narrator who does his homework of checking foreign pronunciation of French words –I sure wish all narrators would do so.
His narration is extremely lively and engaging. You can really feel you know the characters of all the people involved through the intonations the narrator gives them.

DID YOU READ ANY GOOD MYSTERY RECENTLY?

9 thoughts on “Christmas Spirit Reading Challenge 2014 and other mysteries”