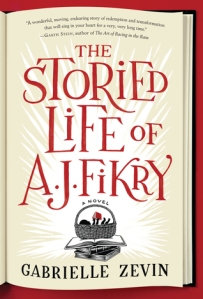 The Storied Life of A. J. Fikry
By Gabrielle Zevin
Narrated by: Scott Brick
Publication Date: April 1, 2014
at HighBridge Company

Source: checked out at my library

Last Spring, I read a lot of enthusiastic reviews about The Storied Life of A. J. Fikry. When I saw it available as an audiobook at my library, I seized the occasion. Really, who would ignore a book about books and bookstores? And also in fact libraries and a book sales rep? If you have not read it yet, I highly recommend it to you. Here is briefly why.

Following some big drama in his life, A. J. is a grumpy character, a bookseller set in his ways, and rather snobbish on top of that. He is not doing too well with others, his world is his books, and only a few special books, and mostly short stories collections. But Amelia, the sales rep of Knightley Press, perseveres to come regularly to his bookstore, despite his rather irascible character on her first visit.

And then one day, something happens that is opening a new door for A. J.
It was really beautiful to see him open up, consider things differently around him, learn to love life again, and develop relationships with all kinds of interesting characters, young and old, all thanks to books and reading. I particularly enjoyed the development of his relationship with Lambiase, a police officer, and the young Maya.
Inside the narrative and the dialogs are found numerous beautiful sentences about books, reading, and writing.
There are also very funny scenes, for instance with a very special author coming for a talk and book signing session at A. J.’s bookstore.

A place ain’t a place without a bookstore.

Click here to read many more great quotations from the book

Thoughts on the audio production:

The narrator was very good especially to convey A. J.’s character, with a rather aloof tone at first, evolving into something more engaged, and sometimes even enthusiastic. That was really the perfect voice for him.

VERDICT: Books have the power to transform our lives. The Storied Life of A. J. Fikry is a beautiful illustration of it. If you love books about books, you can’t pass that one.

Gabrielle Zevin has published six novels. Her debut, Margarettown, was a selection of the Barnes & Noble Discover Great New Writers program. The Hole We’re In was on Entertainment Weekly’s Must List and was a New York Times Editor’s Choice. Entertainment Weekly wrote, “Every day newspaper articles chronicle families battered by the recession, circling the drain in unemployment and debt or scraping by with minimum-wage jobs. But no novel has truly captured that struggle until now.” Publishers Weekly called the novel “a Corrections for our recessionary times.”

Of all her books, she is probably best known for the young adult novel Elsewhere. Elsewhere, an American Library Association Notable Children’s Book, was nominated for a Quill Award and received the Borders Original Voices Award. The book has been translated into over twenty languages. Of Elsewhere, the New York Times Book Review wrote, “Every so often a book comes along with a premise so fresh and arresting it seems to exist in a category all its own… Elsewhere, by Gabrielle Zevin, is such a book.”

She is the screenwriter of Conversations with Other Women (Helena Bonham Carter, Aaron Eckhart) for which she received an Independent Spirit Award Nomination. In 2009, she and director Hans Canosa adapted her novel Memoirs of a Teenage Amnesiac (ALA Best Books for Young Adults) into the Japanese film, Dareka ga Watashi ni Kiss wo Shita. She has also written for the New York Times Book Review and NPR’s All Things Considered. She began her writing career at age fourteen as a music critic for the Fort Lauderdale Sun-Sentinel.

Zevin is a graduate of Harvard University. After many years on Manhattan’s Upper West Side, she recently moved to Silver Lake, Los Angeles.

WHAT’S YOUR FAVORITE NOVEL
ABOUT BOOKS OR BOOKSTORES?

18 thoughts on “Book review: The Storied Life of A. J. Fikry”