In 1843, novelist Victor Hugo’s beloved nineteen-year-old daughter drowned. Ten years later, still grieving, Hugo initiated hundreds of séances from his home on the Isle of Jersey in order to reestablish contact with her. In the process, he claimed to have communed with Plato, Galileo, Shakespeare, Dante, Jesus—and even the Devil himself. Hugo’s transcriptions of these conversations have all been published.

Or so it has been believed…

Recovering from a great loss, mythologist Jac L’Etoile thinks that throwing herself into work will distract her from her grief. In the hopes of uncovering a secret about the island’s mysterious Celtic roots, she arrives on the Isle of Jersey and is greeted by ghostly Neolithic monuments, medieval castles, and hidden caves.

But the man who’s invited her there, a troubled soul named Theo Gaspard, hopes she’ll help him discover something quite different—transcripts of Hugo’s lost conversations with someone he called the Shadow of the Sepulcher. Central to his heritage, these are the papers his grandfather died trying to find.

But what neither Jac or Theo anticipate is that the mystery surrounding Victor Hugo will threaten their sanity and put their very lives at stake.

Seduction is a historically evocative and atmospheric tale of suspense with a spellbinding ghost story at its heart, written by one of America’s most gifted and imaginative novelists. Awakening a mystery that spans centuries, this multi-layered gothic brings a time, a place, and a cast of desperate characters brilliantly to life.

Last month, I reviewed Seduction, which I enjoyed very much. Today, for France Book Tours,  I would like to highlight a few passages where the author mentions France. They will give you glimpses of the beauty of the writing.

The opening of the book is very powerful. Rose has Victor Hugo state the following: 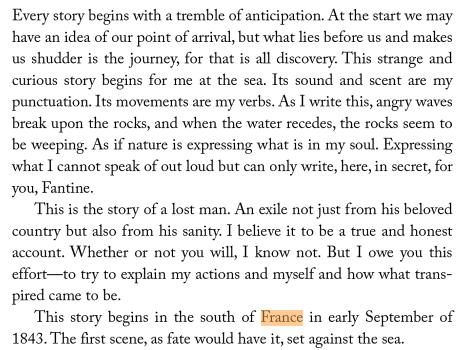 I think I was already hooked by the end of that first  page! 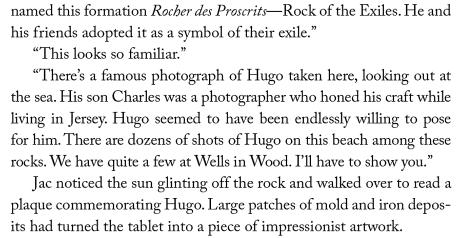 You probably all have seen this famous picture, mentioned here on pages 173-174. It was a treat to have it included at the heart of the novel.

M.J. Rose is the international bestselling author of 12 novels;Lip Service, In Fidelity, Flesh Tones, Sheet Music, Lying in Bed, The Halo Effect, The Delilah Complex, The Venus Fix,The Reincarnationist, The Memorist, The Hypnotist, and The Book of Lost Fragrances.

Rose is also the co-author with Angela Adair Hoy of How to Publish and Promote Online, and with Doug Clegg of Buzz Your Book.

She is a founding member and board member of International Thriller Writers and the founder of the first marketing company for authors: AuthorBuzz.com. She runs two popular blogs; Buzz, Balls & Hype and Backstory.

Getting published has been an adventure for Rose who self-published Lip Service late in 1998 after several traditional publishers turned it down. Editors had loved it, but didn’t know how to position it or market it since it didn’t fit into any one genre.

Frustrated, but curious and convinced that there was a readership for her work, she set up a web site where readers could download her book for $9.95 and began to seriously market the novel on the Internet.

After selling over 2500 copies (in both electronic and trade paper format) Lip Service became the first e-book and the first self-published novel chosen by the LiteraryGuild/Doubleday Book Club as well as being the first e-book to go on to be published by a mainstream New York publishing house.

Rose has appeared on The Today Show, Fox News, The Jim Lehrer NewsHour, and features on her have appeared in dozens of magazines and newspapers in the U.S. and abroad, including USAToday, Stern, L’Official, Poets and Writers and Publishers Weekly.

Rose graduated from Syracuse University and spent the ’80s in advertising. She was the Creative Director of Rosenfeld Sirowitz and Lawson and she has a commercial in the Museum of Modern Art in NYC.

She lives in Connecticut with Doug Scofield, a composer, and their very spoiled dog, Winka.

Connect with the author:

You can read more about Seduction by visiting the following reviewers and book bloggers. That will give you many chances to win something very beautiful:

Sunday, June 23
Review + Giveaway at Rivers I Have Known

Wednesday, June 26
Review at
Musings of a Writer and Unabashed Francophile
Review + Giveaway at The Victorian Librarian

And now to my own giveaway:

The winner of this giveaway will get a signed manuscript page.
Among all the winners of the Tour, the author will pick 1 winner who will receive this beautiful necklace (featured on the book cover):

when you enter a giveaway, I keep your email address only until a winner has been chosen and has confirmed. After that, I delete the form where your answers were stored during the duration of the giveaway. If you win and you email me your mailing address, I delete this email and its information as soon as I have mailed you the book.

5 thoughts on “Seduction, by M. J. Rose: highlights and giveaway”