Running against time, so here are 3 mini audiobook reviews, without the regular review format I usually adopt: 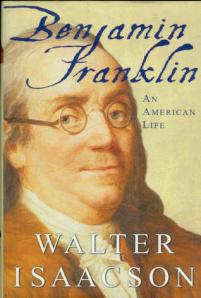 I have been fascinated by the character, mind, and achievements of Benjamin Franklin for a while. As I needed to read something for the state of Pennsylvania for my US challenge, that was perfect. I heard a lot of good things of Steve Jobs’s biographer, then another reason, and I heard good reviews of the audiobook version, so 3 good reasons for an excellent book!
That was a very long audiobook, but I was never bored: the writing is informative and whimsy as the character, I actually laughed aloud a lot at Franklin’s tricks and stories. Walter Isaacson is definitely a biographer I would go back to.
What a mind Franklin had!!
I enjoyed especially all the chapters about his time in France.

As for the narrator, he was very good at conveying Franklin’s humor; I liked the way he changed his voice when he quoted Franklin directly.

I found this funny quotation by Franklin’s on his struggle with the French language:
“Fort sixty years now, masculine and feminine thing – and I am not talking about modes and tenses – have been giving me a lot of trouble… It will make me all the happier to go to paradise where, they say, all such distinctions will be abolished.”
page 371 in the print version 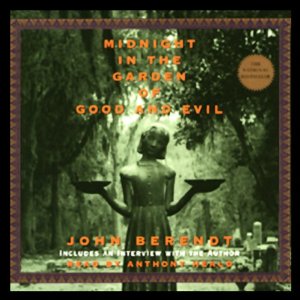 Midnight In The Garden of Good And Evil,
by John BERENDT
narrated by Jeff WOODMAN
published by Recorded Books
in 1996.
15:03 hours

We needed an audiobook for a long car ride, and I needed something for the state of Georgia, so I chose this audiobook on Savannah, a city we enjoyed visiting.
I originally thought this was a novel!
Then I was a bit confused by the synopsis in which a murder story is highlighted. Well, the murder story does not come until almost half of the book. Retrospectively though, that was really well done, as we are presented a whole cast of very colorful and fascinating characters living in Savannah. And then we see how they react with the murder.
I really enjoyed the selection of people appearing in this book, from an antique dealer to Chablis, a drag queen, or a voodoo priestess, and everything in between.
Besides, I learned a lot about Savannah’s history, evolution, and things on the side, such as voodoo practices, drag queens, and art collectors!

I am so happy I decided to listen to this book: the narrator was superb in his change of voices and tones, rendering some characters even more hilarious. I LOVED how he featured the drag queen’s voice for instance so so good!

If you love the South and studies of characters, you really need to listen to this book. Someone told me the movie is much less good than the book. What do you think?

“For me, Savannah’s resistance to change was its saving grace. The city looked inward, sealed off from the noises and distractions of the world at large. It grew inward, too, and in such a way that its people flourished like hothouse plants tended by an indulgent gardener. The ordinary became extraordinary. Eccentrics thrived. Every nuance and quirk of personality achieved greater brilliance in that lush enclosure than would have been possible anywhere else in the world.”

These 2 books count for the following Reading Challenges: 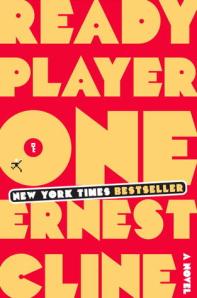 And now the best of these 3, and possibly the best audiobook I have ever listened to. After everyone went gaga on this audiobook these last 2 years, it was high time to listen to it:

Here is the synopsis:
“It’s the year 2044, and the real world is an ugly place.
Like most of humanity, Wade Watts escapes his grim surroundings by spending his waking hours jacked into the OASIS, a sprawling virtual utopia that lets you be anything you want to be, a place where you can live and play and fall in love on any of ten thousand planets.
And like most of humanity, Wade dreams of being the one to discover the ultimate lottery ticket that lies concealed within this virtual world. For somewhere inside this giant networked playground, OASIS creator James Halliday has hidden a series of fiendish puzzles that will yield massive fortune–and remarkable power–to whoever can unlock them.
For years, millions have struggled fruitlessly to attain this prize, knowing only that Halliday’s riddles are based in the pop culture he loved–that of the late twentieth century. And for years, millions have found in this quest another means of escape, retreating into happy, obsessive study of Halliday’s icons. Like many of his contemporaries, Wade is as comfortable debating the finer points of John Hughes’s oeuvre, playing Pac-Man, or reciting Devo lyrics as he is scrounging power to run his OASIS rig.
And then Wade stumbles upon the first puzzle.
Suddenly the whole world is watching, and thousands of competitors join the hunt–among them certain powerful players who are willing to commit very real murder to beat Wade to this prize. Now the only way for Wade to survive and preserve everything he knows is to win. But to do so, he may have to leave behind his oh-so-perfect virtual existence and face up to life–and love–in the real world he’s always been so desperate to escape.
A world at stake.
A quest for the ultimate prize.
Are you ready?” [Goodreads]

I believe this is the novel everyone should read almost as a reference book about our current pop and digital culture/civilization. Where did the author found all this genius creativity to come up with all that, and put it all together in such a smart, suspenseful story that you can’t drop a minute?
I do not know well the pop culture and missed tons of references am sure, but it was clear enough what he was referring to.

A fascinating presentation of our world to be – yes I can easily see this happening.
The book is also a tremendously smart analysis of how as individuals we could operate in that world, at the level of relationships, with ourselves, with neighbors, friends and enemies, and with larger entities.

I saw the end coming, but still I liked how it made the whole issue open up on a rather positive note.

Now the narrator is crazy awesome, so engaging in his tone of voice, his crescendos, excitement and fear in parallel with the story. I was totally hooked from beginning to end. My only trouble, just like every superb novel, is that I was torn between the desire to know what was going to happen, and the regret that the book was soon going to be over. Seriously, I don’t think I had to that extent experienced such a strength of character presentation through a narrator’s voice.

If you have never listened to an audiobook, that’s definitely where you should begin.