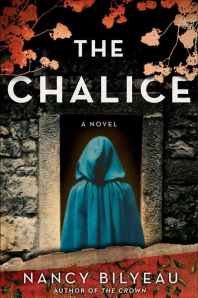 Three is a charm: after Mantel (the tandem Wolf Hall and Bring Up The Bodies) and C. J. Sansom (Dissolution), here is Nancy Bilyeau, with The Chalice, also on Henry VIII, Cromwell, and the dissolution of monasteries, among many other things.

Nancy Bilyeau published first The Crown, which I won some time ago, but have not read yet! But The Chalice is a good stand alone.

Its heroine is Joanna Stafford, a former Dominican novice, who had to quit her monastery because of Henry VIII’s laws. As she struggles to adjust to her new lay life, she finds herself at the heart of an obscure and dangerous prophecy which is supposed to have dramatic consequences on England and more countries at large.

I really loved the style of the book and the portrait of the feisty Joanna; I thought the tension between her nostalgia for her former way of life and her desire to fit in her new imposed life, possibly as a wife, was extremely well-done and astute.

You actually have the full presentation of this tension if you combine Joanna’s life  journey and her friend former brother Edmund’s.

It was an enjoyable new view on the Tudors and the whole religious situation in England at the time.
It was neat to meet all the great people of the era, familiar to readers of everything Tudor. I was a bit taken aback though to find the French ambassador Chapuys in connection with this prophecy thing, but it appears to have been a facet of his “mask of dissimulation,” to use the title of a dissertation (Richard Lundell, “The Mask of Dissimulation: Eustace Chapuys and Early Modern Diplomatic Technique: 1536-1545” (Ph.D. Thesis, University of Illinois, Urbana-Champaign, 2001)).

With the prophecy and necromancy elements, I would say this book is definitely historical fiction but also slightly at the edge of fantasy; well, because of the importance of magic at the time, you may argue about my statement. I was a bit surprised by it, maybe because I did not find it too much present in other historical novels I mentioned earlier, but I actually liked the way it was handled.

In connection with this dimension, I was expecting John Dee (1527–1608 or 1609) to show up (like in the Giordano Bruno’s series, by S. J. Parris), but maybe the book was set a couple of decades too early for that. Instead, we meet another great seer, the most famous of all; it was the first time I met him in a historical novel, and it was a nice surprise. His name? Well, you will have to read the book to know that…

One little thing I found strange: Joanna reads Aelred of Rievaulx, The Life of Edward the Confessor (on p.92), and I thought: how cool is that! My Cistercian friends will understand… She seems to be a smart cookie, with a good and solid religious education and culture. But then, how come on p.256 she (neither ex Brother Edmund) would not automatically make the connection between the raven and St Benedict, and would have to read Gregory’s biography of the saint to find out? This did not seem consistent to the character. But if this is the only flaw I find in her, not bad!

To finish, I really enjoyed the final twist with the chalice itself. I can’t say more, you have to go and read by yourself.
As for me, I really need to go and read The Crown now, and prepare maybe for a third volume on Joanna?

In the next novel from Nancy Bilyeau after her acclaimed debut The Crown, novice Joanna Stafford plunges into an even more dangerous conspiracy as she comes up against some of the most powerful men of her era.

In 1538, England is in the midst of bloody power struggles between crown and cross that threaten to tear the country apart. Joanna Stafford has seen what lies inside the king’s torture rooms and risks imprisonment again, when she is caught up in a shadowy international plot targeting the King. As the power plays turn vicious, Joanna understands she may have to assume her role in a prophecy foretold by three different seers, each more omniscient than the last.

Nancy Bilyeau, author of The Crown, is a writer and magazine editor who has worked on the staffs of InStyle, Rolling Stone, Entertainment Weekly, and Good Housekeeping. Her latest position is features editor of Du Jour magazine. A native of the Midwest, she graduated from the University of Michigan. She lives in New York City with her husband and two children.

Read the The New York Observer article on author Nancy Bilyeau, former editor of Entertainment Weekly, and the release of The Chalice.

HAVE YOU READ THIS BOOK YET?
DO YOU THINK THIS BOOK
HAS FANTASY ELEMENTS TO IT,
OR DO YOU CONSIDER IT TO BE PURELY A HISTORICAL NOVEL?
SHARE YOUR THOUGHTS  IN A COMMENT PLEASE

11 thoughts on “Book review and giveaway: The Chalice”