Published by Minotaur Books on January 8, 2013 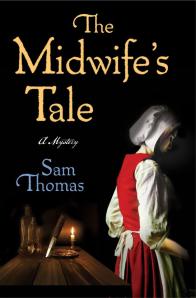 If you follow this blog, you can see that I’m more and more focusing on Historical Fiction. The truth is, there are more and more great emerging historical fiction writers every month! And this novel is no exception.

I’m very grateful to the publisher and to Amy, at Historical Fiction Virtual Book Tours,  for inviting me on this Tour, and for giving me the opportunity to read and review The Midwife’s Tale.

The story begins in June 1644, in York. As you know, the 17th century was a very troubled time in England. In this novel, the city of York is under siege by the Parliament’s armies.

The main protagonist is Lady Bridget Hodgson, a very experienced midwife with good reputation. She quickly discovers that another midwife and friend of hers, Esther Cooper, has been accused of killing her own husband Stephen by poisoning. But Bridget is too astute to accept this version of the facts, and facing the unjust face of justice, she takes the case in her own hands to try to discover who the real killer is. This is not easy in a city in major political and military turmoil, where so many different interests are at play. And she has to act quickly before Esther be sent to her death.

She is helped by Martha, her new servant. But who really is this mysterious Martha? Is her past as simple and clear as she reveals? Is Bridget surrounding herself with dangerous and unreliable characters? As she tries to elucidate the case, more complications come her way, and should she even trust her own relative Edward?

If you pair a good description of the historical setting with a mystery, plus a strong independent woman, you have promising ingredients for a good novel. It works under the pen of Sam Thomas, who does a great job at evoking the time and trouble in the city, and recreating for us the specific world and job of midwives. I had no idea they were so respected and powerful. I enjoyed the description of their tasks and responsibilities. There were also fun passages about all their world of gossips, so important in a time of political crises actually!

I would definitely not have enjoyed finding myself alone in one of those gloomy and dark alleys, with less than reputable characters. Yes they are there also in the novel, in the company of quite mean masters as well. So this is a very diverse and complete cast of characters, that may deceive you as for the identity of the guilty.

If you enjoy historical novels and mysteries set in 17th century England, you have no choice but read this book!

It is 1644, and Parliament’s armies have risen against the King and laid siege to the city of York. Even as the city suffers at the rebels’ hands, midwife Bridget Hodgson becomes embroiled in a different sort of rebellion. One of Bridget’s friends, Esther Cooper, has been convicted of murdering her husband and sentenced to be burnt alive. Convinced that her friend is innocent, Bridget sets out to find the real killer.

Bridget joins forces with Martha Hawkins, a servant who’s far more skilled with a knife than any respectable woman ought to be. To save Esther from the stake, they must dodge rebel artillery, confront a murderous figure from Martha’s past, and capture a brutal killer who will stop at nothing to cover his tracks. The investigation takes Bridget and Martha from the homes of the city’s most powerful families to the alleyways of its poorest neighborhoods. As they delve into the life of Esther’s murdered husband, they discover that his ostentatious Puritanism hid a deeply sinister secret life, and that far too often tyranny and treason go hand in hand. [from the publisher]

Sam Thomas is an assistant professor of history at the University of Alabama in Huntsville. He has received research grants from the National Endowment for the Humanities, the Newberry Library, and the British Academy.

He has published articles on topics ranging from early modern Britain to colonial Africa. Thomas lives in Alabama with his wife and two children.

AND NOW FOR A CHANCE
TO WIN A  COPY OF THIS BOOK!
To be entered in the giveaway share in a comment
before 1/28/2013 midnight
1) what’s your favorite historical novel set in England.
2) Leave your email address
and 3) the name you want me to use
in case I announce you are the winner.
For 2 entries follow my blog by email.
For 3 entries leave also in your comment
the url of your tweet on this giveaway.
I will draw the winner on Tues 1/29.  Good luck!

The giveaway is for one copy and open to US/Canada only.

HAVE YOU READ THIS BOOK YET?
HAVE YOU READ ANY OTHER
HISTORICAL NOVEL ON MIDWIVES?
SHARE YOUR THOUGHTS  IN A COMMENT PLEASE

12 thoughts on “Book review and giveaway: The Midwife’s Tale”