Here is another series of reviewlets, focused now on Japanese Literature.

The Thief
by Fuminori Nakamura

A literary crime masterpiece that follows a Japanese pickpocket lost to the machinations of fate. Bleak and oozing existential dread, The Thief is simply unforgettable.
The Thief is a seasoned pickpocket. Anonymous in his tailored suit, he weaves in and out of Tokyo crowds, stealing wallets from strangers so smoothly sometimes he doesn’t even remember the snatch. Most people are just a blur to him, nameless faces from whom he chooses his victims. He has no family, no friends, no connections…. But he does have a past, which finally catches up with him when Ishikawa, his first partner, reappears in his life, and offers him a job he can’t refuse. It’s an easy job: tie up an old rich man, steal the contents of the safe. No one gets hurt. Only the day after the job does he learn that the old man was a prominent politician, and that he was brutally killed after the robbery. And now the Thief is caught in a tangle even he might not be able to escape. [Goodreads]

This was certainly a different kind of book, even for Japanese literature. It follows the life of a pickpocket, how he does it, how he feels about it, how this “job” colors his relationship with associates, even with a kid who wants to learn the ropes.  It starts quiet and easy; you are even lead to feel sympathy for the guy who acts with gentleness and almost charity, as he chooses his victims to be sure they can pare the loss of a wallet; slowly but surely drags you down though in a dark world full of revenge and treachery. 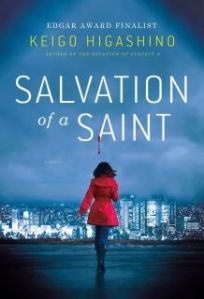 Salvation of a Saint
by Keigo Higashino

In 2011, The Devotion of Suspect X was a hit with critics and readers alike. The first major English language publication from the most popular bestselling writer in Japan, it was acclaimed as “stunning,” “brilliant,” and “ingenious.” Now physics professor Manabu Yukawa—Detective Galileo—returns in a new case of impossible murder, where instincts clash with facts and theory with reality.

Yoshitaka, who was about to leave his marriage and his wife, is poisoned by arsenic-laced coffee and dies. His wife, Ayane, is the logical suspect—except that she was hundreds of miles away when he was murdered. The lead detective, Tokyo Police Detective Kusanagi, is immediately smitten with her and refuses to believe that she could have had anything to do with the crime. His assistant, Kaoru Utsumi, however, is convinced Ayane is guilty. While Utsumi’s instincts tell her one thing, the facts of the case are another matter. So she does what her boss has done for years when stymied—she calls upon Professor Manabu Yukawa.

But even the brilliant mind of Dr. Yukawa has trouble with this one, and he must somehow find a way to solve an impossible murder and capture a very real, very deadly murderer.
Salvation for a Saint is Keigo Higashino at his mind-bending best, pitting emotion against fact in a beautifully plotted crime novel filled with twists and reverses that will astonish and surprise even the most attentive and jaded of readers. [Goodreads]

I discovered Keigo Higashino last summer with The Devotion of Suspect X.  This is the same kind of smart mystery with Yukawa, the physics teacher, and the police detective Kusagani, and their rivalry in solving an almost impossible case.  Did Ayane killed her husband or someone else? If you think yes she did it, how could you possibly prove she did? Apart from a really smart mystery, you will enjoy fun characters with interesting psychology. I highly recommend this author to anyone curious about Japanese literature.
Oh one advice if you have problems with names: write down the names as they come up, and write the relationships between characters, that will make your reading easier, unless you are very familiar with Japanese names. IN that case you don’t need to do that.

HAVE YOU READ ANY OF THESE BOOKS ?
WHO IS YOUR MOST FAVORITE JAPANESE NOVELIST?
DO YOU FEEL LIKE READING ANY OF THESE?
SHARE YOUR THOUGHTS  IN A COMMENT PLEASE