Published by Ballantine Books  in September 2012 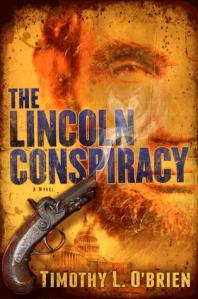 I was thrilled to be invited to be part of this Tour, a great opportunity for me to look more closely at American history. The fact that I am a bit more versed in French history was somewhat a handicap for me, as I was not too familiar with all the real characters inserted in this fascinating historical thriller.

I liked how the real historical and the fictional characters were set to interact in The Lincoln Conspiracy. They were all very well defined personalities, especially Temple, the police detective, and his fierce wife Fiona.

I thought the author was particularly good at rendering the ambiance of the cities, with the dark, gloomy and scary alleys, backyards, and impoverished neighborhoods. It felt like reading Dickens for another country and time.

As for the plot itself, it was very suspenseful: why on earth would Mrs Lincoln’s diary be found in a bag in the company of John Wilkes Booth’s own diary? What important information this mysterious coded diary contain? My attention was grabbed from the start and I felt running with Temple from one obstacle to the next, as he tried to put light on this intriguing discovery.

I enjoyed thoroughly the flashback passages when Temple is hallucinating, because of fever, and reminiscing his days in the orphanage, and the way the author integrated these  memories with what was currently going on.

I also thought that the final revelation, and of course you will need to read the book to know what I’m talking about, could actually totally be possible. I believe it would fit perfectly in the socioeconomic context and development of the era.

If you like American historical novels, Lincoln, tough characters, you really need to read this book. As for me, apart from the enjoyable experience, it is also a great incentive to read more about American history.

I’m very grateful to the publisher and to Amy, at Historical Fiction Virtual Book Tours,  for being on this Tour.

COME BACK TOMORROW
FOR A CHANCE TO WIN A  COPY OF THIS BOOK!

A nation shattered by its president’s murder. Two diaries that reveal the true scope of an American conspiracy. A detective determined to bring the truth to light, no matter what it costs him

From award-winning journalist Timothy L. O’Brien comes a gripping historical thriller that poses a provocative question: What if the plot to assassinate President Lincoln was wider and more sinister than we ever imagined?

In late spring of 1865, as America mourns the death of its leader, Washington, D.C., police detective Temple McFadden makes a startling discovery. Strapped to the body of a dead man at the B&O Railroad station are two diaries, two documents that together reveal the true depth of the Lincoln conspiracy. Securing the diaries will put Temple’s life in jeopardy—and will endanger the fragile peace of a nation still torn by war.

Temple’s quest to bring the conspirators to justice takes him on a perilous journey through the gaslit streets of the Civil War–era capital, into bawdy houses and back alleys where ruthless enemies await him in every shadowed corner. Aided by an underground network of friends—and by his wife, Fiona, a nurse who possesses a formidable arsenal of medicinal potions—Temple must stay one step ahead of Lafayette Baker, head of the Union Army’s spy service. Along the way, he’ll run from or rely on Edwin Stanton, Lincoln’s fearsome secretary of war; the legendary Scottish spymaster Allan Pinkerton; abolitionist Sojourner Truth; the photographer Alexander Gardner; and many others.

Bristling with twists and building to a climax that will leave readers gasping, The Lincoln Conspiracy offers a riveting new account of what truly motivated the assassination of one of America’s most beloved presidents—and who participated in the plot to derail the train of liberty that Lincoln set in motion. [from the publisher]

Timothy L. O’Brien is the Executive Editor of The Huffington Post, where he edited the 2012 Pulitzer Prize–winning series about wounded war veterans, “Beyond the Battlefield.” Previously, he was an editor and reporter at The New York Times. There, he helped to lead a team of Times reporters that was a finalist for a Pulitzer Prize in Public Service in 2009 for coverage of the financial crisis. O’Brien, a graduate of Georgetown University, holds three master’s degrees — in US History,Business and Journalism — all from Columbia University. He lives in Montclair, New Jersey, with his wife and two children.

HAVE YOU READ THIS BOOK YET?
HAVE YOU READ ANY OTHER HISTORICAL NOVEL ON LINCOLN?
SHARE YOUR THOUGHTS  IN A COMMENT PLEASE