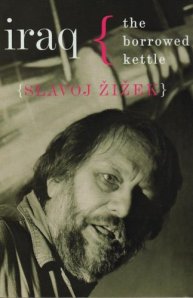 For once, I’ll start this review with excerpts I found very interesting. That will give you a direct experience of the book:

– The three ‘true’ reasons for the attack on Iraq (ideological belief in western democracy –  Bush’s ‘democracy is god’s gift to humanity’; the assertion of US hegemony in the New World Order: economic interests – oil) should be treated like a ‘parallax’: it is not that one is the ‘truth of the others; the ‘truth’ is, rather, the very shift of perspective between them. They relate to each other like the ISR triad…: the Imaginary of democratic ideology, the Symbolic of political hegemony, the Real of the economy, and, as Lacan would have put it in his late works, they are knotted together.
pp.6-7

– The ultimate paradox is that the very strategy of pre-emptive strikes will contribute to the proliferation of nuclear weapons. When the USA attacked Iraq and not North Korea, the underlying logic was clear: once a ‘rogue’ state has breached the critical limit and acquired substantial nuclear weapons, one cannot simply attack it because one risks a nuclear backlash killing millions on ‘our’ side. This, precisely, was the lesson North Korea drew from the attack on Iraq: the regime sees nuclear weapons as the only guarantee of its survival; in its view, Iraq’s mistake was to accept the collaboration with the UN and the presence of international inspectors in the first place.
p.15

– What if the true target of the ‘war on terror’ is not only a global geopolitical rearrangement in the Middle East and beyond, but also American society itself (namely, the repression of whatever remains of its emancipatory potential)? … The focus should be on what actually transpires in our societies, on what kind of society is emerging here and now as the result of the ‘war on terror’. The ultimate result of the war  will be a change in our political order.
p.19

– A propos of Freud, Theodor Adorno claimed that what we observe in the contemporary ‘verwaltete Welt’ and its ‘repressive desublimation’ is no longer the old logic of repression of das Es and its Triebe, but a perverse direct pact between das Uberich (social authority) and das Es (illicit agressive drives) at the expense of das Ich. [note by me: ‘die verwaltete Welt’ means ‘the administered world’]
p.33

– Here, i would like to propose the hypothesis that the US-Iraq war was, in terms of its actual sociopolitical content, the first war between the USA and Europe. That is to say: what if, as some economists have already suggested, the true economic aim of the war was nor primarily the control of oil resources but the strengthening of the US dollar, the prevention of the dollar’s defeat against the euro, the prevention of the collapse of a dollar which is less and less ‘covered’ by ‘real’ value (think of the immense US debt)? Today, a united Europe is the main obstacle to the New World Order the USA wants to impose.
p.36

– What if the war on terror is not so much an answer to the terrorist attacks themselves as an answer to the rise of the anti-globalist movement, a way to contain it and distract attention from it?
p.61

– It is time to remember the great rapprochement between Iraq and the USA during the Iraq-Iran war, when Ronald Reagan sent Donald Rumsfeld to Baghdad to work out the details of the US-Iraq collaboration. In 1982, the State Department deleted Iraq from the list of states which support terrorism. In 1986, in the UN Security Council, the USA vetoed the condemnation of Iraq for its use of poisonous gases, against Iranian soldiers. The USA (Dow Chemical) was delivering poisonous gases, unofficially claiming  that while their use against civilians was not acceptable, their use against Iranian soldiers was justified, since the survival of Iraq was at stake. No wonder, then, that when, in December 2002, Iraq delivered its 11,800-page report on its WMDs to the Security Council, the report was first filtered by the USA, and thousands of pages disappeared in the version that reached the UN – pages which documented the USA’s collaboration with Iraq!
p.65

– Today, charity is part of the game as a humanitarian mask underlying economic exploitation. In a superego-blackmail of gigantic proportions. The developed countries are constantly ‘helping’ the underdeveloped (with aid, loans, and so on), thereby avoiding the key issue – namely their complicity in and co-responsibility for the miserable situation of the underdeveloped.
pp.130-131

I only recently discovered this contemporary philosopher and was intrigued enough to try his writings. I started with Iraq: The Borrowed Kettle, the only one available in my library network!

As you can see, this is far from being an easy book, but the content is refreshingly thought provoking and worth pondering.

The book is in 3 parts: the 1st part analyses the logic or rather absence of logic behind Iraq’s invasion by the US. This was the easiest part for me. Then there are 2 appendices. This is how the author himself presents them: “In its 2 appendices, this book follows the path of gradual ‘abstraction’ from direct political analysis (or, rather, in Hegelese, the path towards concrete totality): first, it questions the reference to democracy and its defense, which plays the central role in the justification for the war; then it goes into a more fundamental problem of the structure of domination that characterizes social order.” (p.7)

I had more problems with these 2 appendices, probably because I need to refresh my knowledge of Lacan.

Slavoj Žižek‘s socio psychological analysis of the phenomenon at stake was fascinating in its concept, even if I didn’t get all the details and thought it was maybe a bit too Lacanian.

I said it is a refreshingly thought provoking book, as it is not often to encounter such a deep reflection on the matter, whether in print or online. It seems unfortunately, we need European writers to reach these heights.

In a recent article published by The Millions, is reported having said that “99% of people are boring idiots.” I think I understand his perspective, as so few venues teach people how to really THINK these days.

May this short post be a humble invitation for you to try your grey matter on an author worth reading.

Zizek analyzes the logic behind toppling Saddam Hussein despite no evidence of WMDs and questions the actual ideological and political stakes of the attack on Iraq. [Goodreads]

Slavoj Žižek is a Slovene sociologist, philosopher, and cultural critic.

He was born in Ljubljana, Slovenia (then part of SFR Yugoslavia). He received a Doctor of Arts in Philosophy from the University of Ljubljana and studied psychoanalysis at the University of Paris VIII with Jacques-Alain Miller and François Regnault. In 1990 he was a candidate with the party Liberal Democracy of Slovenia for Presidency of the Republic of Slovenia (an auxiliary institution, abolished in 1992).

Since 2005, Žižek has been a member of the Slovenian Academy of Sciences and Arts.

Žižek is well known for his use of the works of 20th century French psychoanalyst Jacques Lacan in a new reading of popular culture. He writes on many topics including the Iraq War, fundamentalism, capitalism, tolerance, political correctness, globalization, subjectivity, human rights, Lenin, myth, cyberspace, postmodernism, multiculturalism, post-marxism, David Lynch, and Alfred Hitchcock.

REVIEWS BY OTHERS
Lenin’s Tomb
Goodreads

HAVE YOU READ THIS BOOK YET?
OR ANY OTHER BOOK BY Slavoj Žižek?
DO YOU FEEL LIKE READING THIS BOOK?
SHARE YOUR THOUGHTS  IN A COMMENT PLEASE