I plan to publish this meme every Thursday.
You can share here about any book
or anything cultural you just discovered related to France, Paris, etc.

Click on this image if you want to join

Days of Splendor, Days of Sorrow:

Published by Random House in May 2012 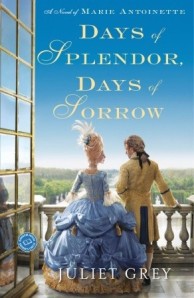 Last year, I reviewed Becoming Marie-Antoinette, by the same author, and enjoyed it a lot. So I eagerly read the sequel, Days of Splendor, Days of Sorrow, but that was not such an enjoyable experience.

In this 2nd book, Marie-Antoinette is presented as a very shallow person, with the excuse basically that she would have been a much more profound person if she had had children earlier in life. A lot of the book has to do with her clothes and hair-do. Were these really her only interests in life, and oh apart from her possible lover Axel von Fersen?

Talking about children, it seems also that Juliet Grey’s position about Louis XVI’s sexual problems is not going along current historians theories. This article, published in 2002, is a good example.

Another dubious point is the famous quotation: “If they don’t have bread, let them eat cake.” [By the way, I know this is the traditional English translation, though the French brioche is really not at all cake: it is bread, enriched with butter, milk, and eggs.] Juliet Grey tried to dissociate herself from the popular attribution of this sentence to Marie-Antoinette, which is probably a good thing, but she has Maria-Theresa of Spain say it, which is probably just as wrong. It would have been better just to ignore the whole thing, instead of mentioning it in passing (this is page 17.)

The book expands a lot on “l’affaire du collier”, and its effect on Marie-Antoinette’s reputation. It ends on the eve of the French Revolution, before the royal couple’s trying to escape.

The one thing I really liked in the book is the connection made with the American revolution, and how one influenced the other.

Now, more on the editing level, I was annoyed by the large number of French words used: it seemed very artificial to me to insert words just like fenêtre (window), or others, and there were a lot of them, especially in the first half of the book. AND the problem is that many of these French words or expressions had mistakes! This was an egalley, so I hoped that the final version would be better. I checked everything thanks to the search option available on amazon, and unfortunately, many mistakes are still in the final version. I am very surprised, as I thought Random House was usually doing a great job. There was a whole sentence in French with three mistakes in it, and thankfully the whole sentence is gone in the final version.

But the following are still there:

I may have missed some more, but these are already far too many. If you don’t understand French, it may not bother you, but seeing the topic, the author and editor should expect French readers to read this book and discover its poor editing work.

Conclusion: I will not read the final book of the series, entitled The Last October Sky.

A captivating novel of rich spectacle and royal scandal, Days of Splendor, Days of Sorrow spans fifteen years in the fateful reign of Marie Antoinette, France’s most legendary and notorious queen.

Paris, 1774. At the tender age of eighteen, Marie Antoinette ascends to the French throne alongside her husband, Louis XVI. But behind the extravagance of the young queen’s elaborate silk gowns and dizzyingly high coiffures, she harbors deeper fears for her future and that of the Bourbon dynasty.

From the early growing pains of marriage to the joy of conceiving a child, from her passion for Swedish military attaché Axel von Fersen to the devastating Affair of the Diamond Necklace, Marie Antoinette tries to rise above the gossip and rivalries that encircle her. But as revolution blossoms in America, a much larger threat looms beyond the gilded gates of Versailles—one that could sweep away the French monarchy forever. (Goodreads)

Juliet Grey has extensively researched European royal history and is a particular devotee of Marie Antoinette. She and her husband divide their time between New York City and southern Vermont. [Goodreads]

If you link your own post on France,
please if possible
include the title of the book or topic in your link:
name of your blog (name of the book title or topic).
Thanks