And Then There Were None

Published by Audio Partners Publishing in 2006 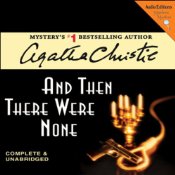 I listened to this book for the following Challenges: 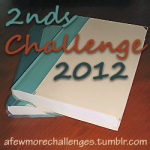 I feel like I should know better Agatha Christie: she is such a classic, and she writes so well. I enjoyed very much The Man In The Brown Suit read last month. And this month, my city has a city reads around mysteries and thrillers, and this book will be the object of a book discussion. As it is one of Agatha’s most famous book, I jumped onto it.  And I had a hard time stopping and waiting for the next opportunity to go on listening to it.

Everything is so mysterious about this book.

Even its title: it was originally Ten Little Niggers. Then it was changed in the US in 1940 to Ten Little Indians. It received its current title only in 2001!

And the author herself gave a different, happier ending to her stage adaptation – that’s why the movie does not end as the novel. I will talk here about the novel itself.

Ten people are invited on an island. There’s some mystery around who really invited them, and why, as their host is not present when they arrive on the island, and they don’t seem to see any connection between each other. One intriguing fact is that in the room of each is a nursery rhyme on display:

Ten little Indian boys went out to dine;
One choked his little self and then there were nine.

Nine little Indian boys sat up very late;
One overslept himself and then there were eight.

Eight little Indian boys travelling in Devon;
One said he’d stay there and then there were seven.

Seven little Indian boys chopping up sticks;
One chopped himself in half and then there were six.

Six little Indian boys playing with a hive;
A bumblebee stung one and then there were five.

Five little Indian boys going in for law;
One got in Chancery and then there were four.

Four little Indian boys going out to sea;
A red herring swallowed one and then there were three.

Three little Indian boys walking in the zoo;
A big bear hugged one and then there were two.

Two Little Indian boys sitting in the sun;
One got frizzled up and then there was one.

One little Indian boy left all alone;
He went out and hanged himself and then there were none.

The guests also discover 10 little Indian figurines in the dining room. The problem is that more mysterious things begin to happen very quickly, and one of the guests dies. Then a second one. Ad then they notice that the little figurines disappear as the guest die, one after the other…

As they start dying, they all start suspecting each other of being the killer, especially as dark things have been revealed about their respective pastsBut they eventually all die – that’s the novel’s ending. So, who could have killed them, and how? Was the murderer among them? was he/she on the island? outside the island??
Isn’t that good?

Only one thing intrigued me in the plot: the characters know that the figurines disappear as the guests die, and they make the connections with the nursery rhyme, but only rarely do they seem to think ahead of the next disappearance based on the next verse of the nursery rhyme.

Researching for this review, I discovered that the nursery rhyme did exist! A first version appeared in 1868, under the title 10 Little Injuns, but it was adapted in 1869 (10 Little Niggers).

The narrator added a bonus to it, with a very detached tone, non-committal without being cold. His tone is more vivacious with some female characters reactions, either hysterical or very upright and severe, and it will be up to you to decide if that’s a clue or not!I think this is the prefect type of books to listen to.

First, there were ten – a curious assortment of strangers summoned as weekend guests to a private island off the coast of Devon. Their host, an eccentric millionaire unknown to all of them, is nowhere to be found. All that the guests have in common is a wicked past they’re unwilling to reveal – and a secret that will seal their fate. For each has been marked for murder. One by one they fall prey. Before the weekend is out, there will be none. And only the dead are above suspicion. [goodreads]

Agatha Christie also wrote romance novels under the pseudonym Mary Westmacott.
Agatha Mary Clarissa Miller was born in Torquay, Devon, England, U.K., as the youngest of three. The Millers had two other children: Margaret Frary Miller (1879–1950), called Madge, who was eleven years Agatha’s senior, and Louis Montant Miller (1880–1929), called Monty, ten years older than Agatha.
During the First World War, she worked at a hospital as a nurse; later working at a hospital pharmacy, a job that influenced her work, as many of the murders in her books are carried out with poison.
On Christmas Eve 1914 Agatha married Archibald Christie, an aviator in the Royal Flying Corps. The couple had one daughter, Rosalind Hicks. They divorced in 1928, two years after Christie discovered her husband was having an affair.
Her first novel, The Mysterious Affair at Styles, came out in 1920. During this marriage, Agatha published six novels, a collection of short stories, and a number of short stories in magazines.
In late 1926, Agatha’s husband, Archie, revealed that he was in love with another woman, Nancy Neele, and wanted a divorce. On 8 December 1926 the couple quarreled, and Archie Christie left their house Styles in Sunningdale, Berkshire, to spend the weekend with his mistress at Godalming, Surrey. That same evening Agatha disappeared from her home, leaving behind a letter for her secretary saying that she was going to Yorkshire. Her disappearance caused an outcry from the public, many of whom were admirers of her novels. Despite a massive manhunt, she was not found for eleven days.
In 1930, Christie married archaeologist Max Mallowan (Sir Max from 1968) after joining him in an archaeological dig. Their marriage was especially happy in the early years and remained so until Christie’s death in 1976. In 1977, Mallowan married his longtime associate, Barbara Parker.
Christie frequently used familiar settings for her stories. Christie’s travels with Mallowan contributed background to several of her novels set in the Middle East. Other novels (such as And Then There Were None) were set in and around Torquay, where she was born. Christie’s 1934 novel Murder on the Orient Express was written in the Hotel Pera Palace in Istanbul, Turkey, the southern terminus of the railway. The hotel maintains Christie’s room as a memorial to the author. The Greenway Estate in Devon, acquired by the couple as a summer residence in 1938, is now in the care of the National Trust.
Christie often stayed at Abney Hall in Cheshire, which was owned by her brother-in-law, James Watts. She based at least two of her stories on the hall: the short story The Adventure of the Christmas Pudding, which is in the story collection of the same name, and the novel After the Funeral. “Abney became Agatha’s greatest inspiration for country-house life, with all the servants and grandeur which have been woven into her plots.
During the Second World War, Christie worked in the pharmacy at University College Hospital of University College, London, where she acquired a knowledge of poisons that she put to good use in her post-war crime novels.
To honor her many literary works, she was appointed Commander of the Order of the British Empire in the 1956 New Year Honours. The next year, she became the President of the Detection Club. In the 1971 New Year Honours she was promoted Dame Commander of the Order of the British Empire, three years after her husband had been knighted for his archeological work in 1968.
From 1971 to 1974, Christie’s health began to fail, although she continued to write. In 1975, sensing her increasing weakness, Christie signed over the rights of her most successful play, The Mousetrap, to her grandson. Recently, using experimental textual tools of analysis, Canadian researchers have suggested that Christie may have begun to suffer from Alzheimer. [goodreads]

HAVE YOU READ THIS BOOK YET?
HAVE YOU WATCHED THE MOVIE?
WHICH ENDING DO YOU PREFER?
WHICH ONE IS YOUR FAVORITE BOOK BY AGATHA CHRISTIE?
DO YOU FEEL LIKE READING THIS BOOK?
SHARE YOUR THOUGHTS  IN A COMMENT PLEASE