Published by Melville House in may 2011

This is a strange love story between 2 characters dealing with some kind of grief, we are not sure what for the young man Nakajima. He looks odd, and only little by little, through a painting by a local artist and friend, will we get to know what’s going on, and most of all through trips to a strange house with strange inhabitants near a lake.

I liked the suspense in the book, and the hauntingly beautiful descriptions of the landscape around the lake.

There’s something both dark and attractive in here, and for sure Yoshimoto manages very well to keep you reading to figure out what’s going on. This was my first book by Yoshimoto, and I would like to try others.

And with this I have read the 3 books I meant to read for the Japanese Literature Challenge. I also plan to read the Tale of Genji, but that will wait for my 52 countries Challenge 2012.

A major literary sensation is back with a quietly stunning tour de force about a young woman who falls for a cult escapee.
While The Lake shows off many of the features that have made Banana Yoshimoto famous—a cast of vivid and quirky characters, simple yet nuanced prose, a tight plot with an upbeat pace—it’s also one of the most darkly mysterious books she’s ever written.
It tells the tale of a young woman who moves to Tokyo after the death of her mother, hoping to get over her grief and start a career as a graphic artist. She finds herself spending too much time staring out her window, though … until she realizes she’s gotten used to seeing a young man across the street staring out his window, too.
They eventually embark on a hesitant romance, until she learns that he has been the victim of some form of childhood trauma. Visiting two of his friends who live a monastic life beside a beautiful lake, she begins to piece together a series of clues that lead her to suspect his experience may have had something to do with a bizarre religious cult. . . .
With its echoes of the infamous, real-life Aum Shinrikyo cult (the group that released poison gas in the Tokyo subway system), The Lake unfolds as the most powerful novel Banana Yoshimoto has written. And as the two young lovers overcome their troubled past to discover hope in the beautiful solitude of the lake in the country- side, it’s also one of her most moving. [Goodreads] 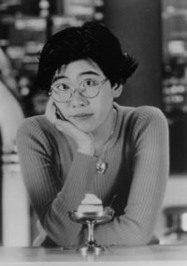 Yoshimoto, daughter of Takaaki Yoshimoto, was born in Tokyo on July 24, 1964. Along with having a famous father, poet Takaaki Yoshimoto, Banana’s sister, Haruno Yoiko, is a well-known cartoonist in Japan. Growing up in a liberal family, she learned the value of independence from a young age.

She graduated from Nihon University’s Art College, majoring in Literature. During that time, she took the pseudonym “Banana” after her love of banana flowers, a name she recognizes as both “cute” and “purposefully androgynous.”

Despite her success, Yoshimoto remains a down-to-earth and obscure figure. Whenever she appears in public she eschews make-up and dresses simply. She keeps her personal life guarded, and reveals little about her certified Rolfing practitioner, Hiroyoshi Tahata and son (born in 2003). Instead, she talks about her writing. Each day she takes half an hour to write at her computer, and she says, “I tend to feel guilty because I write these stories almost for fun.” She keeps an on-line journal for her English speaking fans.

“[The Lake] attests to the power of emotional intimacy to help even the most ‘ridiculously fragile people’ overcome trauma and grief.”
—Hirsh Sawhney, The New York Times Book Review

“The Lake demonstrates Yoshimoto’s deepening talent, and her craft for quietly revealing an enveloping and haunting world.”
—Cleveland Plain Dealer

HAVE YOU READ THIS BOOK YET?
WHICH BOOK BY YOSHIMOTO IS YOUR FAVORITE?
DO YOU FEEL LIKE READING THIS BOOK?
SHARE YOUR THOUGHTS  IN A COMMENT PLEASE