Before I Go to Sleep

Published by Harper Audio in September 2011 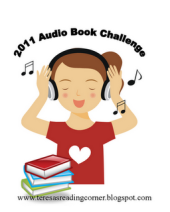 This is really unusual, but I found this book because I follow a fantastic narrator: Orlagh Cassidy. I enjoyed so much her narration of the Postmistress, that I now keep an eye on her other audiobooks.  This one sounded intriguing. There was unfortunately a bug in the request system at my library, so I had to wait longer than expected, but that was worth the wait.

I enjoyed this book very much. It starts slowly: something happened to Christine, and her memory is damaged. Consequently, she cannot remember anything of her past, not even of what she did the day before. When she goes to sleep, all her previous memories are erased, unless she writes things down in her journal.

Little by little, the story picks on interesting twists and turns, and becomes full of suspense. And once you think you figured out what happened, well you are dead wrong at the next turn!

That was a great thriller, on a gentle tone, I mean, not bloody horrific,  but a psychological thriller.

As usual, Orlagh Cassidy had the perfect tones of voice to translate Christine’s pain as she struggles to recover her past, and to have you suspended waiting for the truth to get revealed. Believe me, it is not what you first expected it would be. A great fun read. I hope Watson will soon write more.

‘As I sleep, my mind will erase everything I did today. I will wake up tomorrow as I did this morning. Thinking I’m still a child. Thinking I have a whole lifetime of choice ahead of me …’ Memories define us. So what if you lost yours every time you went to sleep? Your name, your identity, your past, even the people you love – all forgotten overnight. And the one person you trust may only be telling you half the story. Welcome to Christine’s life. [Goodreads]

S J Watson was born in the Midlands, lives in London and worked in the NHS for a number of years.
In 2009 Watson was accepted into the first Faber Academy ‘Writing a Novel’ Course, a programme that covers all aspects of the novel-writing process. Before I Go to Sleep is the result.
Now sold in over 30 languages around the world, Before I Go To Sleep has been also been acquired for film by Ridley Scott’s production company, Scott Free, with Rowan Joffe to direct. Filming is scheduled to begin in 2011. [Goodreads]

Every day Christine wakes up not knowing where she is. Her memories disappear every time she falls asleep. Her husband, Ben, is a stranger to her, and he’s obligated to explain their life together on a daily basis–all the result of a mysterious accident that made Christine an amnesiac. With the encouragement of her doctor, Christine starts a journal to help jog her memory every day. One morning, she opens it and sees that she’s written three unexpected and terrifying words: “Don’t trust Ben.” Suddenly everything her husband has told her falls under suspicion. What kind of accident caused her condition? Who can she trust? Why is Ben lying to her? And, for the reader: Can Christine’s story be trusted? At the heart of S. J. Watson’s Before I Go To Sleep is the petrifying question: How can anyone function when they can’t even trust themselves? Suspenseful from start to finish, the strength of Watson’s writing allows Before I Go to Sleep to transcend the basic premise and present profound questions about memory and identity. One of the best debut literary thrillers in recent years, Before I Go to Sleep deserves to be one of the major blockbusters of the summer. –Miriam Landis

“Imagine drifting off every night knowing that your memories will be wiped away by morning. That’s the fate of Christine Lucas, whose bewildering internal world is rendered with chilling intimacy in this debut literary thriller. . . . You’ll stay up late reading until you know.” (People (4 stars))

“Brilliant in its pacing, profound in its central question, suspenseful on every page and satisfying in its thriller ending.” (Anita Shreve)

“Quite simply the best debut novel I have ever read.” (Tess Gerritsen)

“This mesmerizing, skillfully written debut novel works on multiple levels. It is both an affecting portrait of the profound impact of a debilitating illness and a pulse-pounding thriller whose outcome no one could predict.” (Booklist (starred review)) [amazon]