A Story of Wall-Street 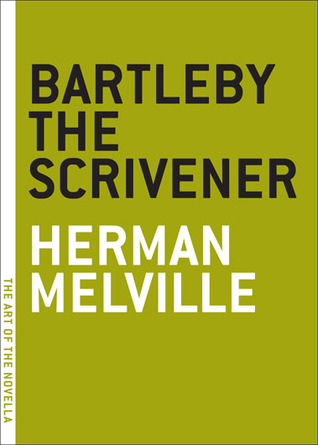 I had so far only read Moby-Dick by Herman Melville, which I enjoyed very much, so I thought I would go on in this Challenge with this title. I found in it the same quality of writing as in the famous novel, especially in describing characters and thoughts.

I was actually more fascinated in discovering the character of the narrator, he does not have a name, than Bartleby himself. Melville has a knack at transcribing moral struggles: the narrator is torn in his job as a lawyer between his generous feelings, for the most part, and his work responsibilities.

The way he finally decides to go illustrates what Melville thought of the society of his time.

It was a good read, though I always feel a bit frustrated by the nature of novellas, always expecting more depth and length. But in this genre, I have the feeling one can hardly do better than Melville.

Too short to be a novel, too long to be a short story, the novella is generally unrecognized by academics and publishers. Nonetheless, it is a form beloved and practice by literature’s greatest writers. In the ART OF THE NOVELLA series, Melville House celebrates this renegade art form and its practitioners with titles that are, in many instances, presented in book form for the first time.

Academics hail it as the beginning of modernism, but to readers around the world—even those daunted by Moby-Dick—BARTLEBY THE SCRIVENER is simply one of the most absorbing and moving novellas ever. Set in the mid-19th century on New York City’s Wall Street, it was also, perhaps, Herman Melville’s most prescient story: what if a young man caught up in the rat race of commerce finally just said, “I would prefer not to”?

The tale is one of the final works of fiction published by Melville before, slipping into despair over the continuing critical dismissal of his work after Moby-Dick, he abandoned publishing fiction. The work is presented here exactly as it was originally published in Putnam’s magazine – to, sadly, critical disdain. [Goodreads]

There is an interesting analysis of this work in wikipedia.

Herman Melville was an American novelist, short story writer, essayist, and poet. His first two books gained much attention, though they were not bestsellers, and his popularity declined precipitously only a few years later. By the time of his death he had been almost completely forgotten, but his longest novel, Moby-Dick — largely considered a failure during his lifetime, and most responsible for Melville’s fall from favor with the reading public — was rediscovered in the 20th century as one of the chief literary masterpieces of both American and world literature.

1 thought on “Review #60: Bartleby the Scrivener”